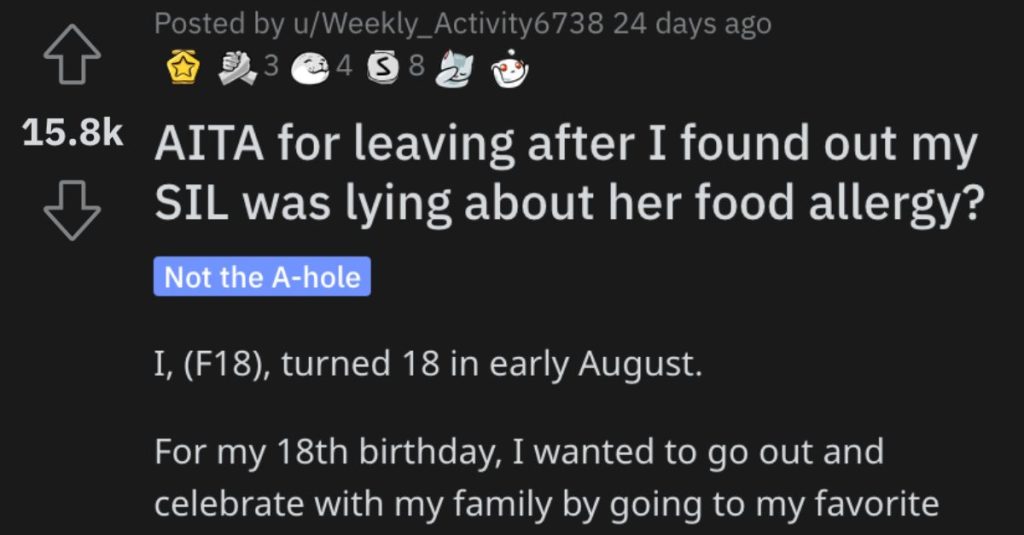 She Left Dinner After Her Sister-In-Law Lied About a Food Allergy. Was She Wrong?

I know people tend to get worked up about food allergies, but leaving a dinner over someone lying about one?

Is that a good enough reason to leave a dinner?

Read on to see if you think this woman was out of line for storming out of a dinner.

AITA for leaving after I found out my SIL was lying about her food allergy?

For my 18th birthday, I wanted to go out and celebrate with my family by going to my favorite Chinese restaurant.

I’m quite a picky eater (I’m autistic and have issues with textures) but any type of Asian food is safe food for me. When it comes to more Western cuisine, I don’t have a lot of options unless I make it at home.

Everything was organised and ready to go, but a week prior to my birthday, my brother’s fiancée Vicky (F27) said that she can’t go. She said she has a seafood allergy, and after contacting the restaurant, they said they can’t realistically cater to her and politely advised that she doesn’t eat there.

Vicky and my brother suggested that we go to this Italian restaurant instead. Everyone was on board but…I h**e Italian food. The textures of cheese, pasta and just all of it is just gross to me.

I got upset because it was supposed to be a dinner for my birthday, and it was like I got forgotten about. I talked to my parents and they told me to stop complaining, Vicky can’t help having an allergy.

I sucked it up and went. I spent my birthday miserable, and ended up just sneaking in my own snacks into the restaurant.

Well, last weekend I spontaneously went over to my brother’s house with no warning because I had forgotten my hoodie there from a few days prior.

My brother let me inside and I saw Vicky sat on the couch scoffing tuna like it’s nobody’s business.

Me: I thought you were allergic to seafood?

Vicky: What are you talking about?

Me: My 18th birthday last month. You said we couldn’t go to the Chinese restaurant because you’re allergic to seafood.

Vicky: Well I’m not medically allergic, I just can’t stand the smell of all those shrimps and prawns. It makes me feel nauseous.

Me: So you ruined my 18th birthday because you don’t like how seafood smells. Wow.

I stormed out and blocked Vicky and my brother on everything. I couldn’t believe this.

I talked to my parents. They think I’m being dramatic, and that it’s just a restaurant, and told me to apologise to Vicky for speaking to her like that in her home.

I was so angry, I went to go stay with my bf’s family for a few days who very kindly let me stay. My family thinks I went super overboard, and are calling me a brat and entitled. I don’t know how to feel.

One person said she’s NTA and that what her parents did wasn’t okay.

And this individual said anyone would be annoyed by what she’s dealing with. 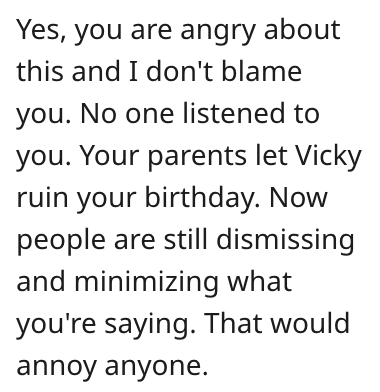 Another Reddit user also brought up that she’s autistic and her family wasn’t sensitive to it. 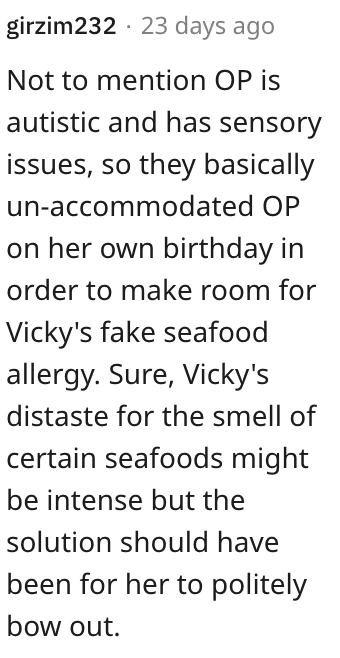