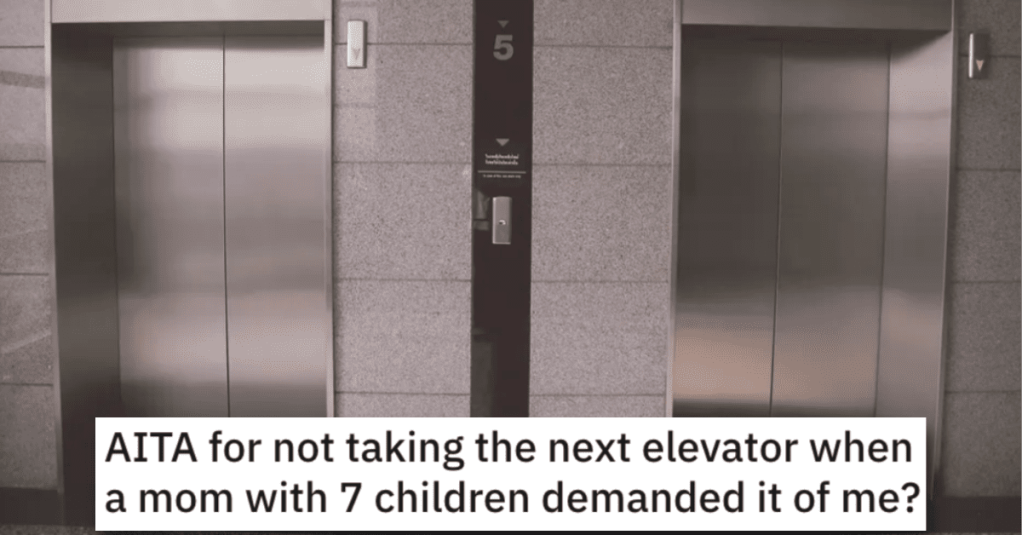 She Said No When a Woman With 7 Kids Told Her to Take Another Elevator. Is She a Jerk?

I’m someone who really, really doesn’t like crowded elevators, so there’s no way in Hell I’d be getting onto one that was as packed as the one you’re gonna read about in this story.

But she must’ve had her reasons for acting this way, right?

Check out her story below and let us know in the comments if you think she acted like an a**hole.

AITA for not taking the next elevator when a mom with 7 children demanded it of me?

“A neighbour of mine has 7 children and they are all under the age of 9.

I have seen her many times,and she always demands people take the next elevator because “she has kids who need to get home.” She has physically shoved into the elevators and forced people out, including my elderly father.

I was on my way home from work – I take public transit – and she was on the bus with all kids. They were screaming and running up and down the aisle; basically making such a scene that the driver asked her to have the kids sit down before they get hurt.

Sure enough, one of the kids was spinning around one of the poles and bumped her head as we were going over the train tracks near my place and started screaming. She looked like she was physically okay, no blood, not even a red mark, but she screeched the rest of the ride to the building.

I was first in the building and hit the elevator button. She came in with her double stroller and her gaggle of children running around her as I stepped into the elevator and held the door for her. She told me that I would have to get out and wait for the next one.

I said “excuse me?” She heavy sighed at me and said “my stroller won’t fit in with you in here. Get out and take the next one.” I refused, saying I would make myself as tiny as I could but I was staying in the elevator. She became irate, pointed at her kids and said “do you see what I’m dealing with here?!”

I said I understood that it’s overwhelming but I had worked a long day and I needed to get home. I said “in or out, because I’m going now.” She pulled her stroller and kids out, calling me an a**hole the entire time. A few people were waiting behind her and got in with me.

Two began thanking me for standing up to her because she does this “all the time,” but the other one called me an a**hole for not being sympathetic to her situation.

I don’t think people should have to make constant accommodations for people just because they have kids, especially when they’re rude and demanding. But AITA here?”

This reader said she’s NTA and that they’re glad she stuck to her guns. 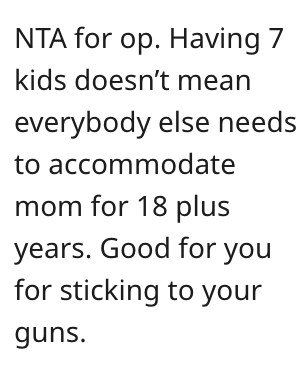 Another individual also said she’s NTA and this lady needs to wait for an empty elevator. 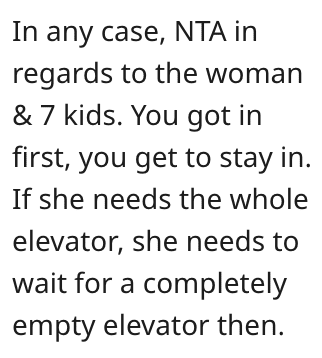 And this reader said she’s NTA and added that they’re tired of entitled parents. 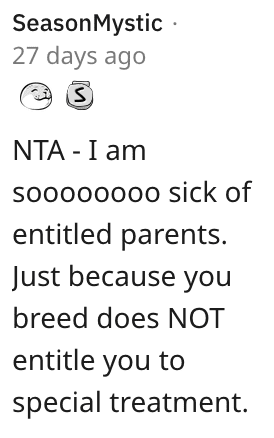