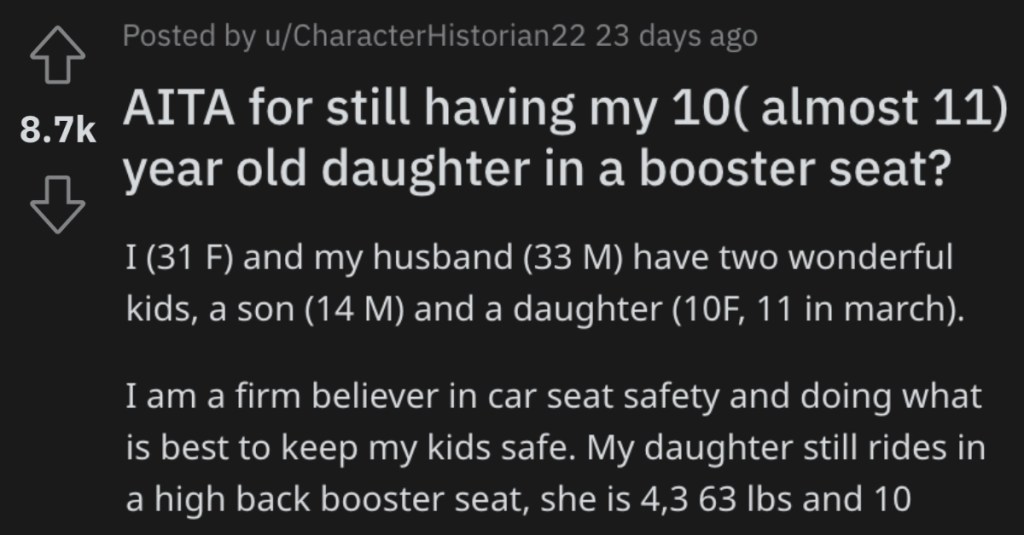 She Still Puts Her 10-Year-Old Daughter in a Booster Seat. Is She Wrong?

Hmmmm, this sounds a little odd, doesn’t it?

Putting a kid who is almost 11-years-old into a booster seat?

It’s a big of a head-scratcher…

But let’s get all the details before we decide if this person is an a**hole or not.

AITA for still having my 10 (almost 11) year old daughter in a booster seat?

I am a firm believer in car seat safety and doing what is best to keep my kids safe. My daughter still rides in a high back booster seat, she is 4,3 63 lbs and 10 years old. She has recently started expressing disapproval of it.

A couple weeks ago we were on our way to school and I noticed she had climbed out of her booster seat. I told her to get back in it and she said she was never sitting in it again. I told her that she needed to sit in it because she was too short to ride safely with just the seatbelt. She got upset and started yelling at me saying I’m ” being a jerk” and ” treating her like a baby” that she is ” too old for a stupid booster seat”.

After a minute my husband came out and asked what was going on, she told him I was being a jerk and treating her like a baby. He told her not to talk to me that way and that she needed to sit in her booster seat to keep her safe. I then got out of the car and told her that we weren’t going anywhere until she was in her booster seat, and if she made us late by refusing she would deal with the consequences, and that if she continued to refuse and make us late for school or any other event she would be grounded.

After that she got back into the booster seat and buckled up.

Since then she hasn’t refused again but still complains sometimes.

Her brother told me I was being an AH for treating her like a baby and that I should just let her ride with just the seatbelt.

My husband says I’m doing the right thing keeping her safe but im still not sure. I mean I’m just trying to keep her safe and she ever complained about her booster seat before. But on the other hand none of her friends still use booster seats and she is getting to that age where peer pressure is a very tough thing.

This person said she’s an a**hole and she needs to make amends to her daughter. 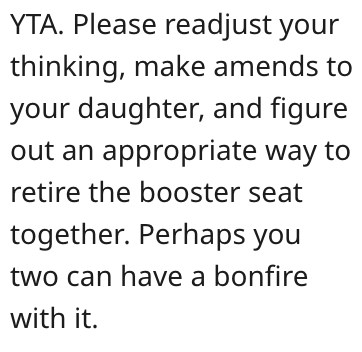 Another individual said she’s NTA but realizes that a teenager thinks image is more important than safety.

And this individual said she’s an a**hole and she’s embarrassing her kid. 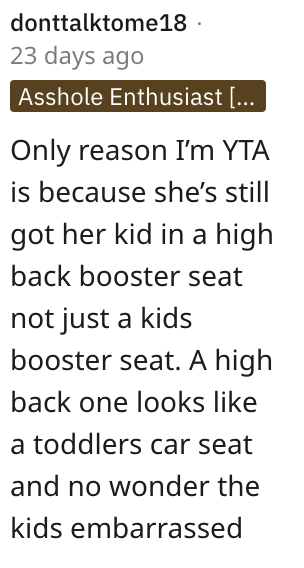 Let us know what you think about this story.