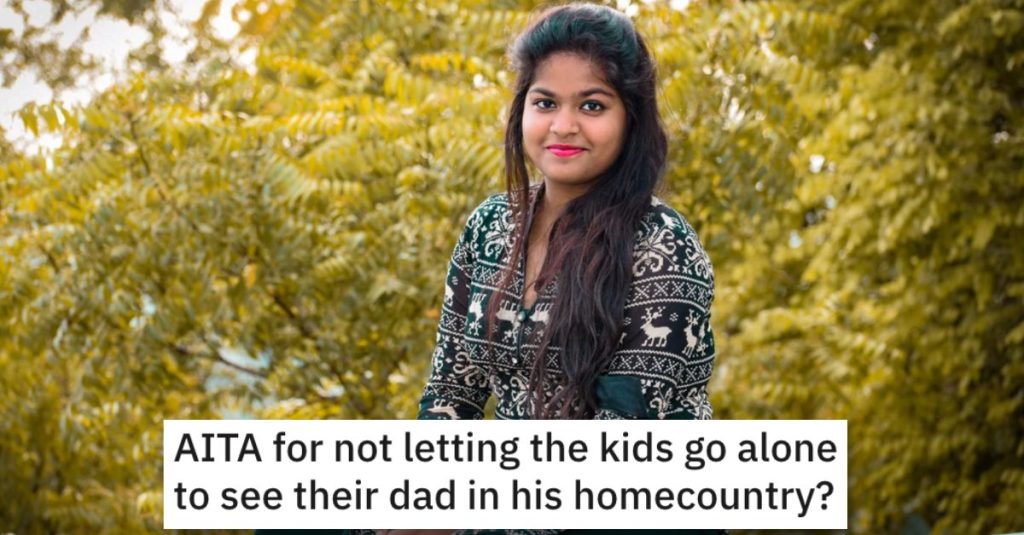 She Won’t Let Her Legally Adult Kids Visit Their Severely Ill Father in Another Country By Themselves. Is She Wrong?

What’s an appropriate age for a child to travel without an adult?

I guess it’s different for everyone, but we can all sympathize with a parent not wanting their kids to travel without them, especially to another country.

Check out this story and see if you think this mother is going too far.

AITA for not letting the kids go alone to see their dad in his home country?

I (39F) divorced my ex-husband (42M) 8 years ago. We have 2 kids together; 19M, 18F, that I had sole custody of after their dad became sick. He’s been getting treated for his medical condition in his home country and recently I’ve been told his health is declining.

My ex-MIL called me asking if I could let the kids come visit their dad for few days. She said she would handle tickets and expenses. I was a bit taken aback by her request. I said I was sorry I wasn’t feeling comfortable letting the kids travel alone. she told me she could book me a tick too but I said I was too busy to literally travel to another country.

She asked me to be more considerate and understand that her son misses his kids and wants to see them, I suggested that they video call him like they always do, but she told me that her son cried about wanting them there in person so he could hug them and smell them. she said his mental and emotional well being depends on it because of concerns about his declining health.

I talked to the kids and they said they wanted to go but I didn’t feel comfortable letting them travel on their own despite grandmother’s assurance about taking care of the travel expenses. But the kids never been on a flight out of the country on their own and so I think it’s a valid reason to be concerned, especially since they never been to this place before.

Ex-MIL started berated me after I gave her my final answer. She told me that I should be prepared to take full responsibility if the kids don’t get to see their dad potentially one last time but I figured from her tone that she keeps coming with excuses to guilt me into letting the kids go.

The kids are upset over the fact that I’m seemingly treating them as small children but that was not why I said no.”

This reader said this woman is the a**hole and is being selfish. 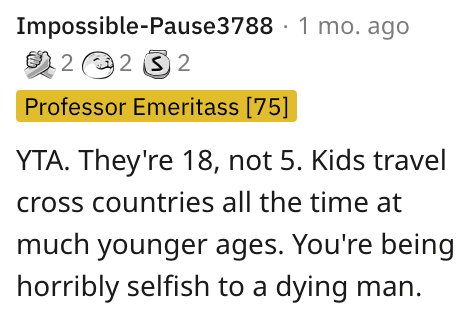 And this individual agreed and talked about how young they were when they started traveling alone.

And another person also said he was the a**hole. Ouch!