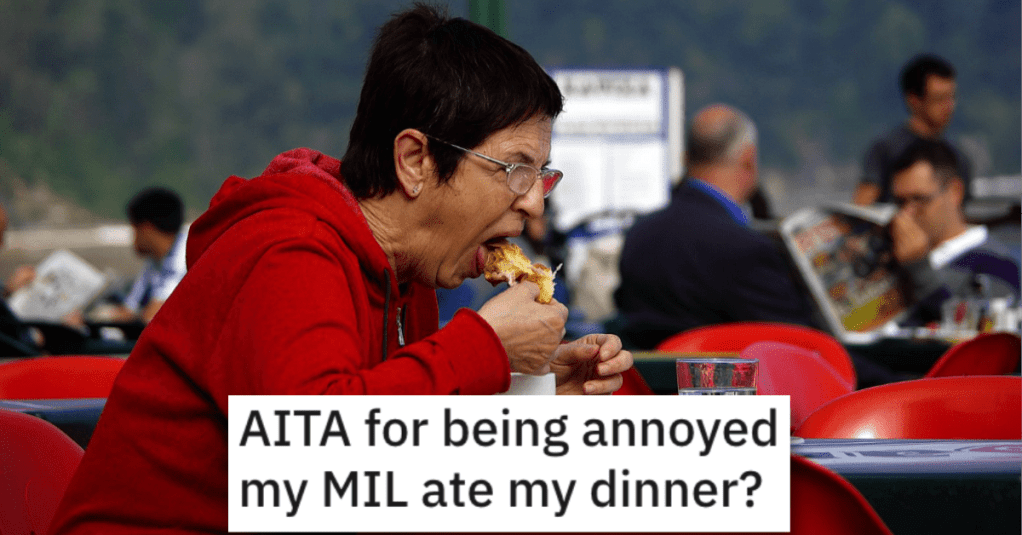 She’s Mad That Her Mother-In-Law Ate Her Dinner. Is She a Jerk?

I’m not gonna give anything away here, but I think I’d be pretty PO’d if someone ate my dinner, too…

But let’s not get ahead of ourselves, okay…?

Check out this story from Reddit’s “Am I the A**hole?” page and see if you think this woman acted like an a**hole for getting mad at her mother-in-law…

AITA for being annoyed my MIL ate my dinner?

“Tonight my MIL came over for dinner I made Swedish meatballs in gravy with mashed potato, broccoli and home made bread.

In my house we tend to eat in the lounge room unless it’s a big event so I dish up everyone’s meal. Kids, MIL and husband I take their meals to them and then before serving mine I have to run out to the line and grab some clothes that I hung out earlier. No big deal.

I served up generous portions for everyone way more than I thought they could eat but when I got back from the line my dinner was gone. I asked if anyone knew what had happened to the food on the bench and MIL pipes up and says she wanted some more.

She’s piled her bowl FULL of meatballs. Way more than she would ever eat. I’m stunned. I figure oh well. I’ll just grab some fast food a bit later or something because maybe she was super hungry. My bad for not cooking enough.

But once she’s eaten what she wants, she asks for a container so she can take her extra portion home for dinner the next night. I’m pretty annoyed at this point and mention that it was meant to be my dinner for that night, not her takeaway meal for the next night. She says “oh well you can eat it then” and I reply with “no thank you.” And hand her a container. ( I didn’t want to eat her leftovers.)

She leaves and my husband puts the kids to bed. When he comes back in he asks what’s wrong and I tell him that I’m hungry. I cooked the meal and didn’t get to eat any of it and I’m p**sed off about it. He agrees MIL was way out of line and messages her that her actions were greedy and selfish. She owes me an apology.

She replies telling him that I acted like an a**hole, I should have cooked more and anticipated that she would take home a portion for the next day, she offered me what she didn’t eat and I didn’t want it.

It’s not her fault and that I owe HER an apology for my attitude and snarky comment. She’s also posting on social media about what happened and people are saying that I’m an a**hole.. and a rude hostess.

I should also add I’m currently pregnant and I feel like I can be quite unreasonable at times due to hormones.

This person said she’s NTA and that she should never cook for her MIL again. 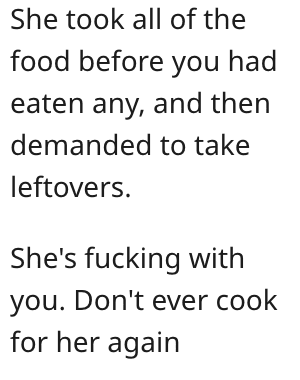 And this person made a good point: who would do something like this? 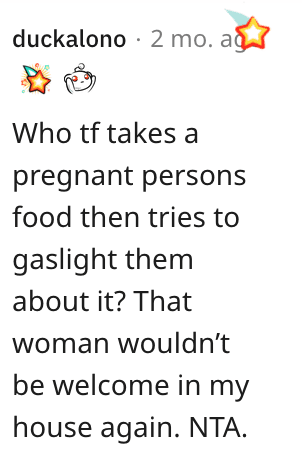 Another individual said she’s NTA and she should never serve her again. 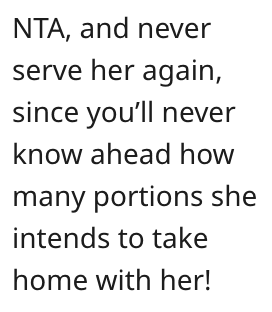