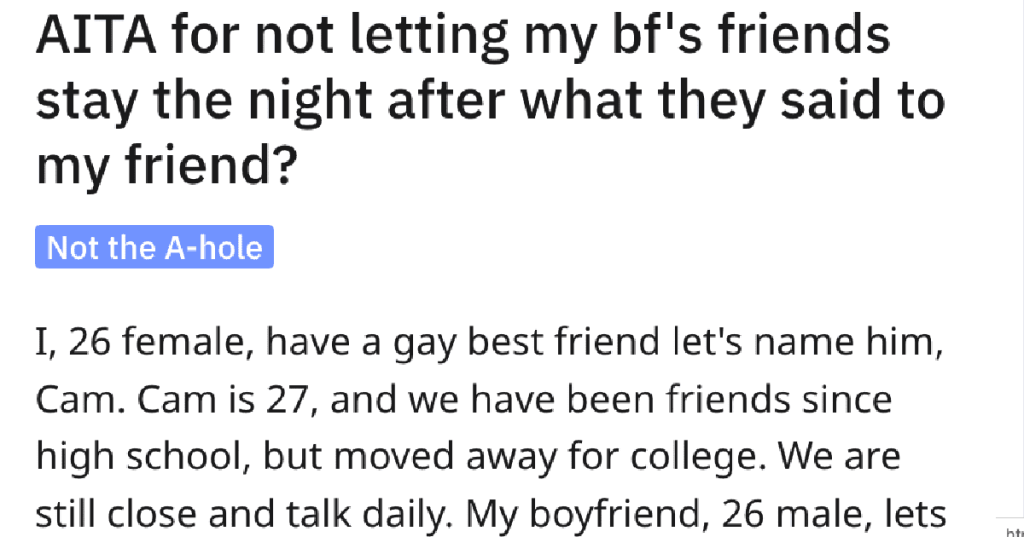 Should This Woman Feel Badly For Kicking Her Boyfriend’s Friend Out With Nowhere To Go?

Sometimes, the idea that we have to be “nice” can get in the way of doing what’s right. We’re so programmed to be polite, and to worry about other people’s feelings, that we tend to overlook their bad behavior and how it affects us and others.

This woman has been close with a best friend – who just happens to be gay – since high school. They haven’t seen each other in awhile, so when she and her boyfriend decided to throw a big birthday party, they invited him.

One of her boyfriend’s close friends was also invited from out of town.

Cam is 27, and we have been friends since high school, but moved away for college.

We are still close and talk daily.

My boyfriend, 26 male, let’s call him jay, is also pretty close to him. He told me to invite him over for my birthday since it’s been three years since I last seen him in person.

He also asked if he could invite his close friend from Arizona since they were coming down to watch a game of some sort.

So, I agreed said they’re also invited to the party if they like. We called our friends and they were coming on the same day, Cam is earlier.

When the two guests met for the first time, the boyfriend’s friend used a rude slur that triggered OP’s friend, who had no support as far as his sexuality growing up.

She and the boyfriend apologized profusely, which helped, but the bottom line was that she knew he wouldn’t feel safe in the house as long as the other friend was there.

Today I picked up Cam and since Jay doesn’t pick his friends up til later we all sat down talked and let Cam tour our new house. When it was time to pick up Jay’s friend me and Cam went to sit down on the couch to watch some tv.

Cam has never met Jay’s friend, but he knows that they’re coming. When they arrived Cam stood up and started to introduce himself.

Jay’s friend, let’s call him Richard, cut him off and said, “Who invited this Maggot?” (except it wasn’t maggot but something similar)

Cam stopped and I was at a lost for words.

Cam went to the room he was staying in and I ran after, Jay blew up at Richard asking what the hell is wrong with him. Some context, Cam’s family was never supportive and I was his only true family. They would use that word towards him and it made him feel defenseless, which I bet with most people who are called that word.

Jay later came into the room and apologized profusely to Cam, which Cam did appreciate but he said it wasn’t his fault.

OP asked her boyfriend’s friend to leave. Her boyfriend stood behind her decision, but his friend made all sorts of additional rude comments and demanded to know where he was supposed to go.

I got upset and walked back into the living room and told Richard he’s going to have to stay somewhere else.

He looked at me with a face of disbelief and told me that he’s staying over because Jay invited him.

I told him yes, only because I let him, and that I own the house therefore I get to say what goes on in it.

In told him to leave and he blew up at me. Calling me all sorts of words, then calling Jay a pussy for not standing up for him, but Jay stood with Cam in the other room.

He asked me where will he stay since he only brought enough money for himself to buy food and merchandise.

She’s wondering if she was wrong to throw him out with nowhere to go, since he’s from out of town, but isn’t sure what her other options would have been anyway.

I told him that’s not my problem and insisted he leave.

I feel like an a**hole for just kicking him to the curb when he has no place to go, and feel like it was an over reaction, but at the same time it really hurt Cam.

Reddit is going to be on her side here, I think, but the comments are definitely still worth a read.

Not only is the friend a bigot, he’s also an idiot – no need to worry about hurting anyone’s feelings there. 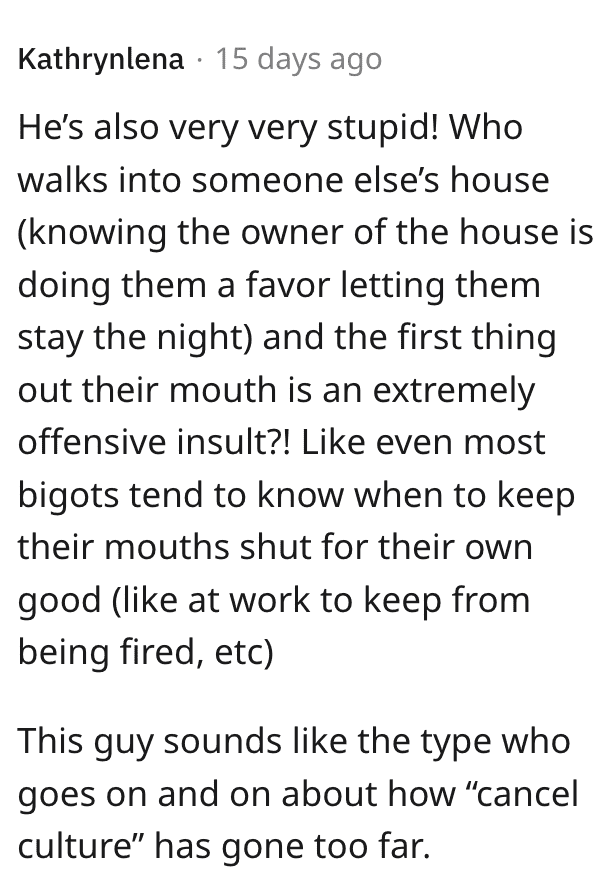 Who doesn’t love some instant karma? 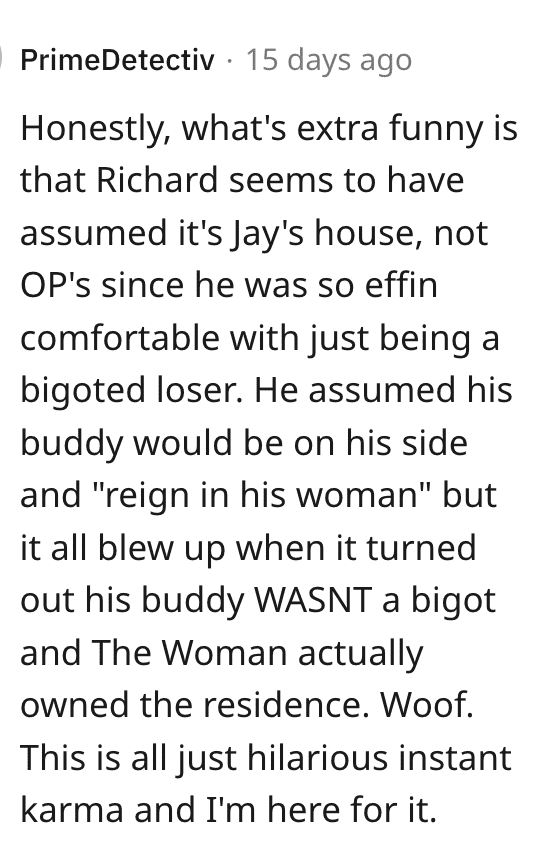 I’m totally here for this recreation. 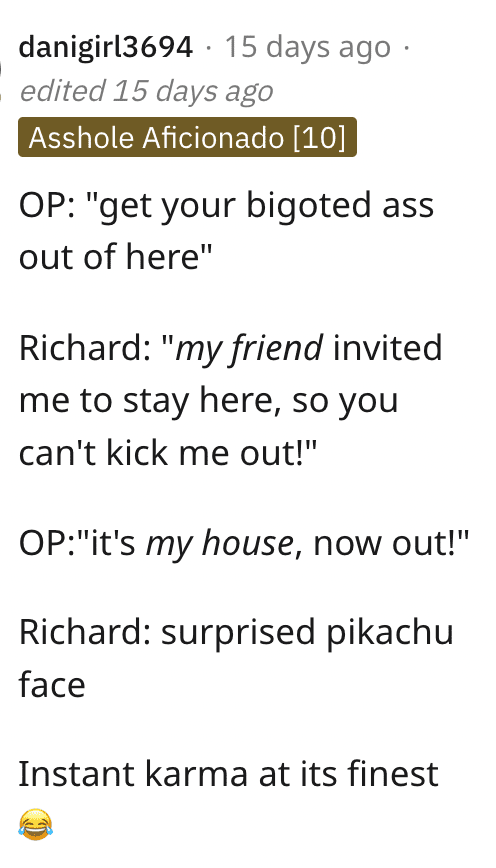 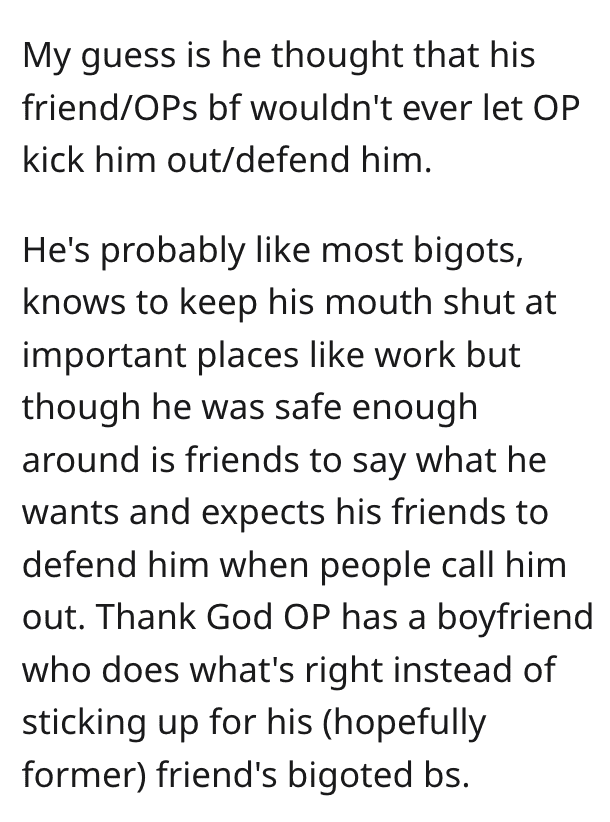 Because this guy doesn’t seem to have many social skills at all. 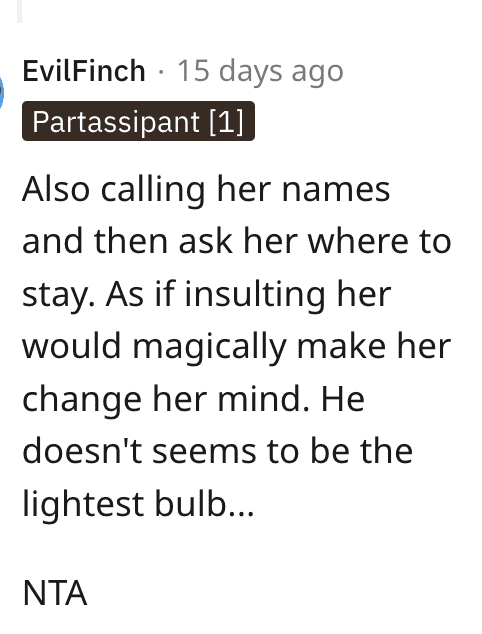 Y’all, I cannot with this dude. Who on earth does this in someone else’s home (or at all, but I mean…).

How would you have responded? Would you have felt badly for even a second? Tell us why or why not down in the comments!