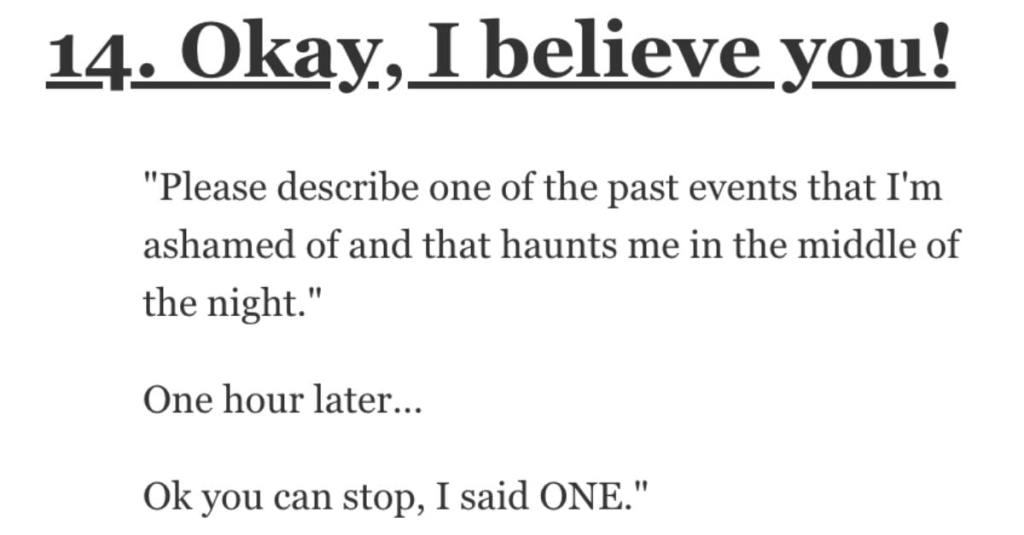 Someone Claims to Be You From the Future. How Do They Prove It? Here’s What People Said.

Let’s have a little bit of fun, shall we?

Imagine that a person interrupts your life one day and claims to be you from the future. What do you do? You couldn’t just take them at their word, right?

So how would you make them PROVE it to you?

Let’s get weird with folks on AskReddit!

“I ask them how many times have you accidentally almost cut your fingers off on a table saw.

Hopefully I didn’t see that number going up in the future.”

“When I was 8, I made up a number to prove exactly this. I figured that unless I shared it or the imposter could read minds, I would be safe.

I’ve never told anyone, and my refusal to tell my wife started as a joke and ended up causing our only actual fight in 10 years together…which I now am finding very suspicious.”

“”Show me the fourth finger of your right hand”.

That’s my weird finger, it wasn’t stitched back together correctly after an accident so theres a wobbly line of 13 stitches going right through the middle.

If they’ve got it, and can tell me about the nerve damage and rehab process “we” sustained, then they’re me.”

“Ask them who are the top 3 artists I loved in my teen era.

“I’ll ask them specifics about a recurring dream I had when I was a kid.

The one with the werewolf eating the neighbors across the street!”

“I’ve always done this thing where I take “snapshots” of my life, when things seem very surreal.

I have 5 snapshots in total.

Describe two of them.”

“I’d ask them what I said to my mom 5 minutes before she passed away.

Only she and I were there.”

“In Jr. High I used to ditch class and spend time in the library because I’m a huge nerd. My school didn’t like letting students print or copy things because it was too expensive.

So to print or copy you needed a four digit code. I watched the librarian enter the code a couple times and memorized it. It’s a total random number with nothing to do with my life (think all your “typical” pin numbers like a birthday, anniversary or street address).

Even when I tell someone, like my mother or sister, they can never remember it, it is totally forgettable and I’ve been using it for 20 years now. You could ask me in 50 years and as long as I don’t have dementia I will remember it, it’s engrained in me.”

“When I was a kid I made my own written language with completely diff characters for English letters, so I would simply ask him to write my name in that language.”

“What is the maiden name of your mom?”

“What is the name of your first pet?”

“What is the name of your first boss?”

“Where is the tiny scar from the time I was bit by a spider at the age of 9? Where did I get the scar?

Answer: left thumb, at a water park in California called the Drop Zone.”

“I would ask them what the secret is that I’ve held about my ex-husband since before we split.

I’m a woman of my word, and no one but me would know.”

“Please describe one of the past events that I’m ashamed of and that haunts me in the middle of the night.”

“”Okay, if you’re me from five years in the future, tell me our secret passphrase.”

“You idiot, we look exactly the same. How much more proof do you need?”

How would you have your future self prove themselves to you?