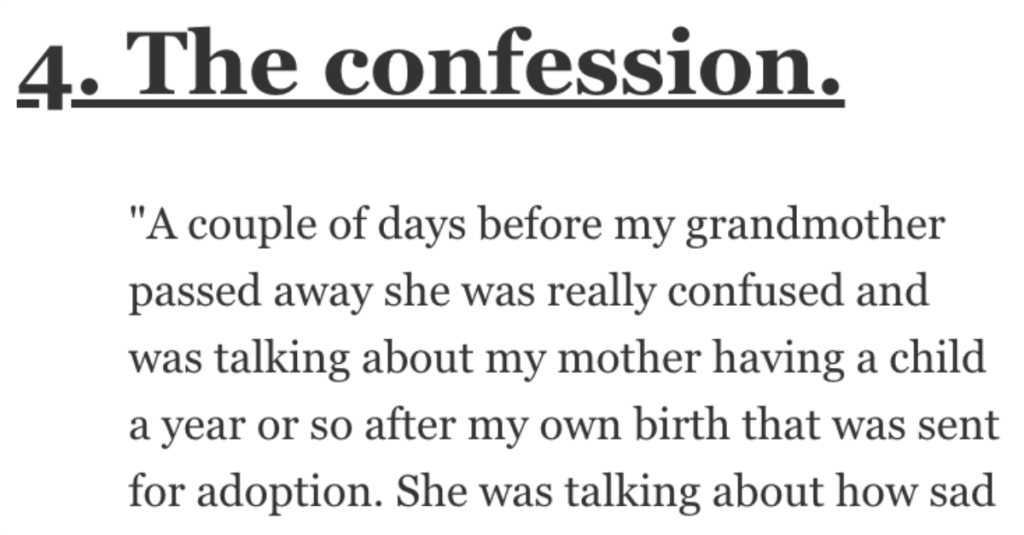 Have you ever had someone who knew they were on their way out confess something to you?

Something they’d been holding onto for decades and needed to get off their chest before they entered the great unknown?

It seems like it happens all the time…and today we’re going to hear some true ones.

Folks on AskReddit talked about the confessions they’ve heard from people who were about to pass away.

“My dad had Alzheimer’s and ended up in a secure ward.

He was blind and almost deaf. I was visiting him one day. He didn’t know who I was, but he started talking about me. He said I had done better than him in life and that he was proud of me. He was a quiet man IRL and never told me that when I was growing up.

Looking back, he did things that my dumb a** never realised were for me. Like, when he retired his colleagues asked what he’d like as a present. He chose a scientific calculator (this was back in the 1970’s).

He had no use for it. He gave it to me for university. I thought he was just passing it on, not realising that he’d asked for it with me in mind.”

“I cared for an elderly neighbour who had Alzheimer’s and sometimes she seemed to want to unburden herself of secrets.

In the months before she went into a nursing home I heard a lot about very minor transgressions at work, feuds with other ladies at church and… some cousin f**king.”

“My grandparents have three daughters. Everyone always said that my mom was my grandfather’s secret favorite. He never agreed.

I heard he was on his d**th bed on April 6th. Went to see him on April 8th. He was scary looking and the doctor kept saying he didn’t understand why he wasn’t d**d yet.

April 9th everyone but my mom had the chance to come and say goodbye. She doesn’t drive and my dad works 10 hours away. My grampa kept saying her name (well, saying.. he couldn’t eat or drink so it was more like a whisper).

He closed his eyes and never opened them again.”

“A couple of days before my grandmother passed away she was really confused and was talking about my mother having a child a year or so after my own birth that was sent for adoption.

She was talking about how sad and horrible this was and that I deserved to know. After my grandmother passed I confronted my mom about it and she neglected this, and I truly believed her.

Couple of months later it turns out my grandmother was the one adopting away a baby girl who was born between my mother and aunt.”

“This one really hurts and has haunted me for almost a decade. My perfect mother said she was m**ested by her older cousin and named him when she was a small child.

I didn’t ask her to go into details and she d**d a few hours later. I never told anybody but specifically my dad who d**d last year. I have no idea if he even knew. Now I’m afraid this was something she held inside and suffered alone with her whole life.”

“The last two things my grandfather told me was that when he was a kid he and his mother would throw big stones on cars from a bridge and he also told me about how much better looking the lady that delivered bread to his family was compared to my grandma.”

“My Nana was renowned for religiously having a gin and tonic at 9pm every night. She and my Grandpa had started the tradition on the honeymoon and she continued it 20 years after his d**th.

On her own d**thbed in the hospital we managed to sneak in a gin and tonic in a hip flask. We offered it to her, only for Nana to turn around and say “I’ve never really been fond of them”

Bless her, she went out laughing at us.”

“My great grandmother confessed to me that she had walked in on her uncle r**ing her sister.

“The last conversation I had with my Aunt Rose.

She was manic depressive and during a visit to my dad’s house, she had a manic episode. When this happens, she talks non-stop, as fast as she can get the words out. She told me she felt my dad harbored resentment against her because her sister got my grandfather ki**ed.

My grandfather used to do “the numbers” in the Lower East Side in the 1970’s. He would have a lot of cash on him in the bars late at night. Her sister was a junkie, knew this, and had him set up to be robbed. During the robbery gramps got stabbed and ended up d**ng several months later from sepsis.

He did sh**t both the assailants, although I am unsure of their outcomes. I only knew he was m**dered, but they always kept the details from me.”

“When I was in nursing school I had a patient in her 80s who had some pretty severe heart disease. She had been in the hospital more and more frequently and felt like her time was coming.

She confessed that she had ran away from home when she was 17 because her brother had tried to r**e her. She fought him off and ran. Never went back. She said she hadn’t told anyone that in all that time. She was a pretty awesome lady to talk to. But no family and had no visitors.

I always tried to spend as much time as I could with her. She got sent home and I never saw her again.”

“I had recently been adopted by a rich family.

They had a biological son, but he never visited. My adoptive father told me that the son has tried to k**l him before, I was shocked.

Fast forward a year later and the father is in the hospital. He recently suffered an undisclosed accident and the only people with him were me and my adoptive mother

The mother asks why the son hasn’t come and my father starts to tell her why…Turns out he had been r**ing the son since he was 5. The mother was shocked and ran out crying.

I witnessed the entire conversation.

“Many years ago I was working in an open heart surgery ICU and had a man in his early 40’s as my patient. He had many tattoos of demons, etc.

He didn’t recover very well after his emergency heart surgery and was in a medically induced coma for about two weeks before we could wake him up and remove his breathing tube. When he finally woke up he was crying.

He said I feel like I just spent an entire lifetime in hell and I’ve done horrible things in my life and I completely deserved it. He wept for hours and wanted to apologize to everyone he had ever hurt in his life.”

Okay, now it’s your turn to speak up.

In the comments, tell us about any late-in-life confessions that you’ve heard from people.