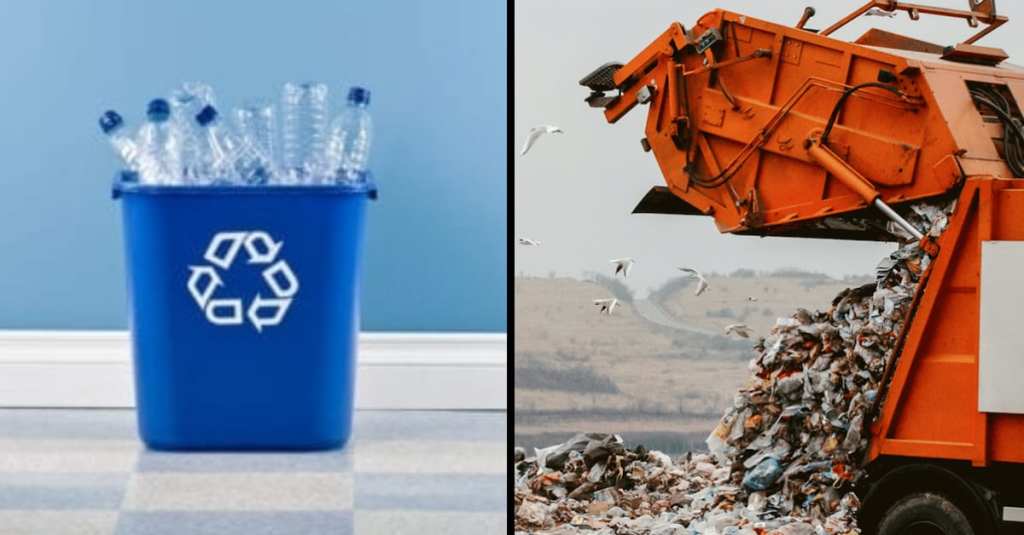 With climate change on the rise, many folks are trying to make that extra effort towards sustainability. As it turns out, recycling might be more of a placebo than an actual solution.

When I worked in Louisville, recycling bins were few and far between. So, I walked that additional block to find a place to deposit any plastic or paper. I was shocked when I found out that all my recyclables were dumped into landfills anyway.

Sadly, this isn’t uncommon. The truth of the matter is, recycling doesn’t usually doesn’t happen – even when you think it is.

And… as the title suggests… it’s actually a part of a marketing campaign made by oil companies.

NPR recently uncovered several industry-related documents that exposed the idea as a hoax. Recycling plastic is another endeavor that is (ironically) unsustainable. It’s a method that ends up being more costly and time-consuming than dumping waste.

So, that’s exactly what the oil industry did – they just dumped plastic into landfills with the rest of the world’s trash.

Soon, recycling became part of a calculated PR strategy. Industry officials discovered that even the idea of recycling helped increase sales of plastic. If people thought that the plastic was recyclable, there was virtually no deterrent to buying any other material. After all, plastic is easy. If folks didn’t think it was harmful to the environment, there was little reason to buy anything else.

Since the 70’s, we have recycled less than 10 percent of disposed plastic. One industry insider in 1974 commented:

“There is serious doubt that [recycling plastic] can ever be made viable on an economic basis.

Even today, most “recycled” plastic ends up dumped into landfills.

Laura Leebrock of Rogue Disposal & Recycling shared with NPR her own struggle with explaining to folks outside the oil industry just why recycling isn’t a simple fix.

“I remember the first meeting where I actually told a city council that it was costing more to recycle than it was to dispose of the same material as garbage.

And it was like heresy had been spoken in the room: You’re lying. This is gold.

We take the time to clean it, take the labels off, separate it and put it here. It’s gold. This is valuable.”

The oil industry pumped millions of dollars into the recycling marketing campaign. But there’s a very basic problem to the idea behind it. Every time plastic is melted down and reused, its quality degrades. That means plastic can only be safely recycled once or twice before it is totally unusable. This quote from a 1973 report conducted at Syracuse says it all:

“There is no recovery from obsolete products.”

Yes, a decades-long lie created our idea of recycling.

Still, activists are fighting to turn this idea into a reality. The road ahead is long and difficult, but if we all do our part and research before acting, we might be able to make a difference.

What other ways do you try to bring sustainability into your life?