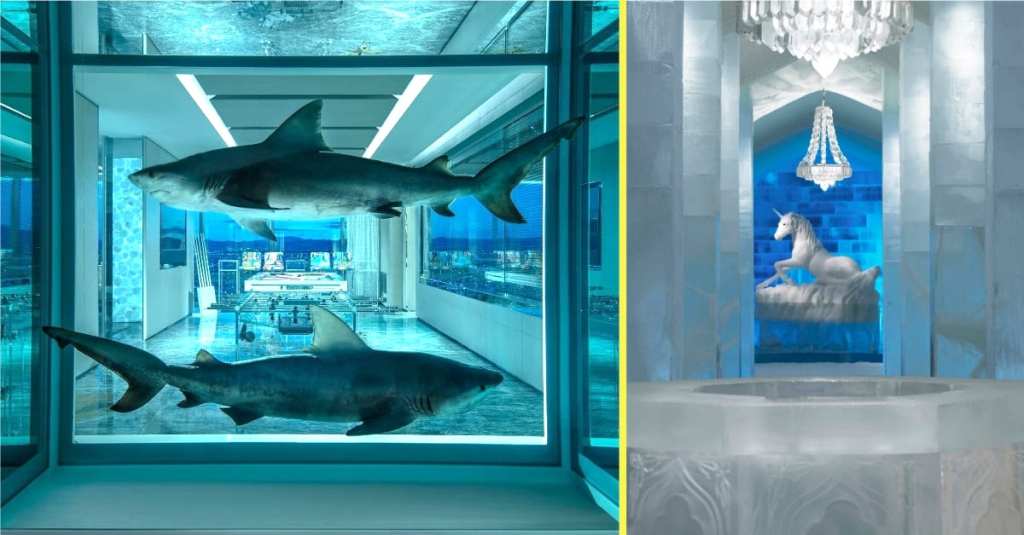 The 8 Most Talked-About Hotels in the World

If you’re someone who loves and has the means to travel, you should definitely start a list of must-stay places around the world – with these 8 buzz-worthy hotels at the tip-top.

And no, they’re not the most expensive. But this first one… yeah, it’s pretty pricey.

Get ready for some sticker shock! 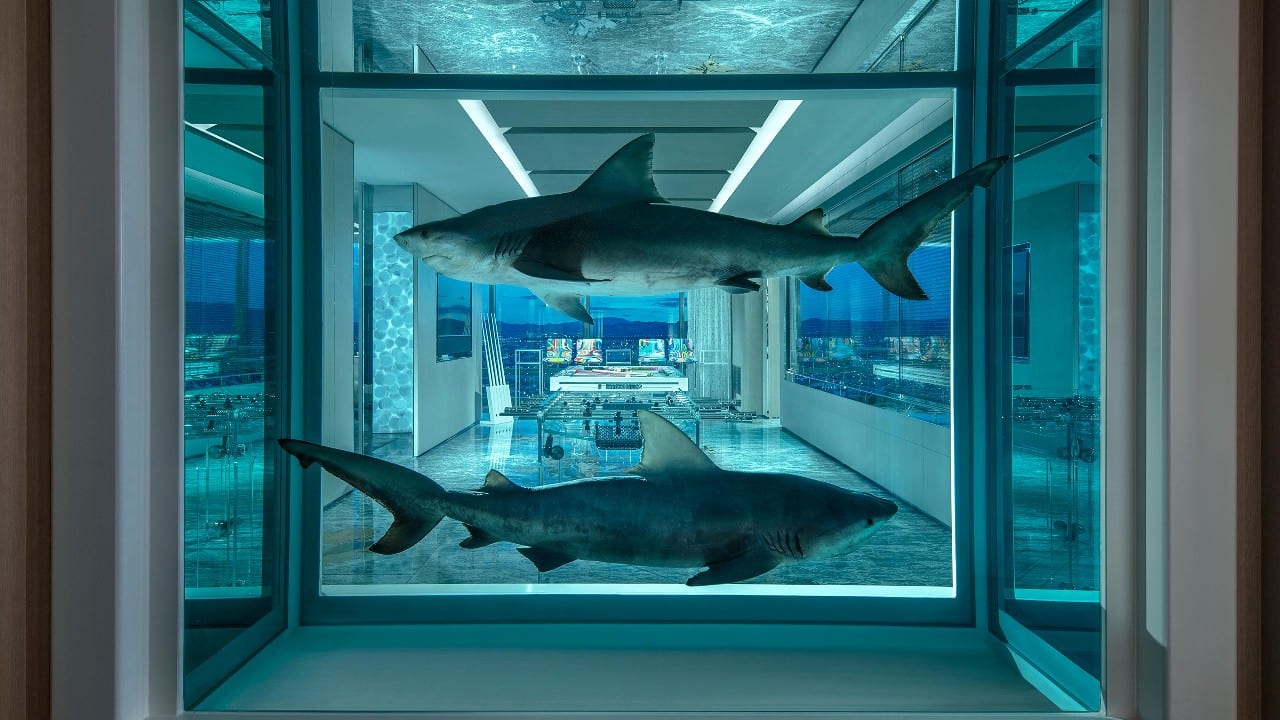 Designed by artist Damien Hirst, this exclusive Palms Casino suite goes for $100,000 a night, which yes, makes it the most expensive hotel room in the world.

The room is two stories and features a 13-seat bar and a media area that can hold 52 people (if you’ve got that many friends), and also boasts 24-hour butler service, a private outdoor pool, and $10,000 in resort credit.

Bonus: if you’ve got at least a $1 million line of credit at the casino, you can stay in the room for free.

In 1974, an overnight at this hotel inspired Stephen King to write The Shining, and the fact that the movie adaptation by Stanley Kubrick doesn’t use it for the exterior shots reportedly riled the famous author up something fierce.

The hotel is still known as “America’s most haunted” and is a popular destination with ghost hunters and fans of the film – from a ghostly chambermaid to a former handyman unwilling to leave the grounds, if you’re into creepy and supernatural, this is a must-stay destination. 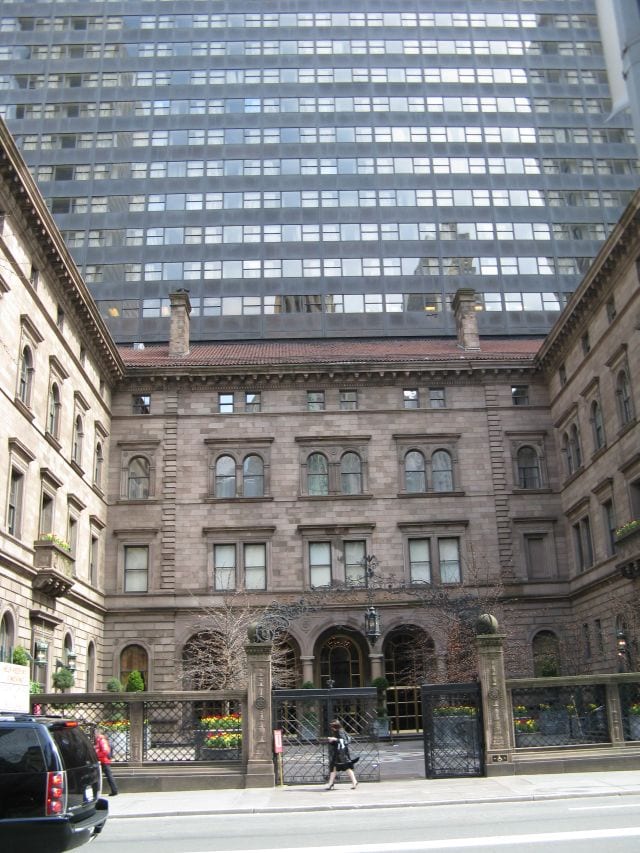 Harry Helmsley gifted the Helmsley Palace Hotel to his wife Leona in 1981 – she starred in the TV ads for the hotel as the “Queen of her Palace.” The pair were real estate moguls with no shortage of cash; they owned the Empire State Building and the Park Lane Hotel and had a reputation (the staff at the hotel referred to Leona as the “Queen of Mean.”

That reputation landed her in prison for tax evasion. Employees lined up to testify against her at the trial – one housekeeper claimed Leona always said “only little people pay taxes.”

She did 19 months in federal prison and may have changed her tune – she left $4 billion to charity when she died at the age of 87. 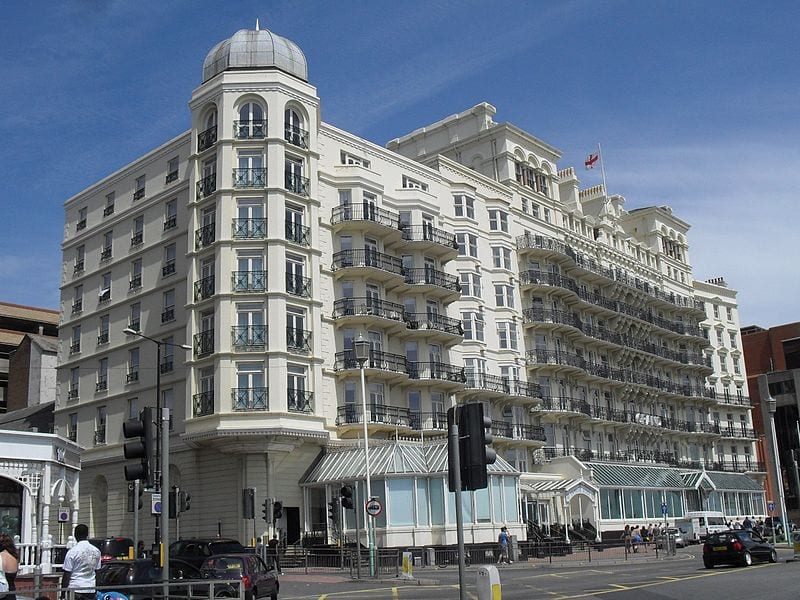 Image Credit: The Voice of Hassocks

British Prime Minister Margaret Thatcher and the Conservative Party were staying at the hotel for their annual conference in 1984, obviously unaware the IRA was making plans to bomb the hotel while Thatcher was in residence.

Operatives requested the room directly above Thatcher’s suite and planted a bomb set to go off at a later date – and it did, ripping through the building on October 12, 1984, killing five and injuring 30 more.

One of the bombers, Patrick Magee, was found guilty and sentenced to 8 life terms, but was subsequently released under the Good Friday Agreement.

He works with the daughter of one of the men he killed in the attack with her charity, Building Bridges for Peace, in the hopes of resolving conflicts around the world.

The Swedish village of Jukkasjarvi and its IceHotel sit 124 miles north of the Arctic Circle. The hotel walls are made of ice from the Torne River, 3 feet thick, and the entire thing melts and is rebuilt annually in a different design.

If you visit you can choose a “cold” room and sleep in a balmy 23 degrees atop a bed of compacted snow and ice (they do throw in reindeer skins) or you can choose to admire the frozen tundra from a “warm” room, instead. 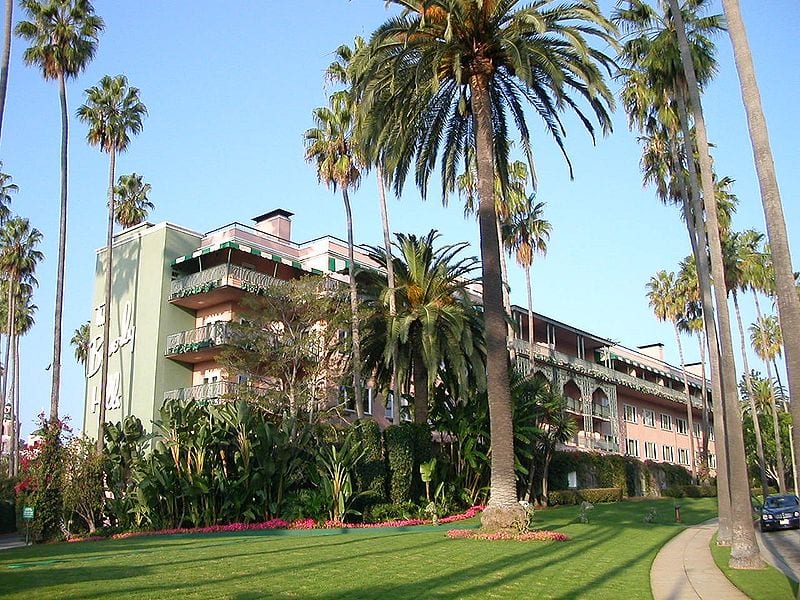 A legend in Hollywood, the candy-link Beverly Hills Hotel has played host to Frank Sinatra and the rest of the Ratpack, and looked on while Marlene Dietrich stunned the patriarchy by wearing trousers in public.

The hotel is no stranger to famous guests and no stranger to odd requests – Elizabeth Taylor and Richard Burton asked for 2 bottles of vodka for breakfast and 2 for lunch while the reclusive Howard Hughes wanted his tray of sandwiches left for him under a nearby tree.

She had a hiccup in 2014 when the owner’s country of origin made homosexuality punishable by stoning but in the end, protestors moved on and the elite of Hollywood returned, unable to resist the siren’s song of old-school glamor.

The Fairmont Le Chateau Frontenac is the most photographed hotel in the world – it’s romantic design, based on France’s Loire Valley castles, is impossible to resist.

During WWII President Franklin Roosevelt and Winston Churchill met there to plan the invasion of Normandy and, more recently, an antique mailbox in the lobby has garnered international attention. It’s featured in the Korean drama Goblin: The Lonely and Great God, which has 250 million viewers across Asia.

You might know it if you’re a royal watcher – Meghan Markle was in residence before her marriage to Prince Harry – but the country hotel has a shady past. It was once owned by American millionaire William Waldorf Astor, who gifted the hotel to his son and daughter-in-law. The parties the couple threw were Gatsby-esque and earned the attendees the moniker the “Cliveden Set.”

Perhaps more interesting were the events of 1961, when Secretary of State for War Joh Profumo was a guest at the same time as osteopath Stephen Ward, model and showgirl Christine Keeler, and Russian intelligence officer Yevgeny Ivanov.

The Cold War was in full swing and things got messy fast when Keeler began an affair with Profumo and Ivanov, then sold her story to the press.

Profumo and Prime Minister Harold Macmillan were forced to resign and Ward was arrested for living off immoral earnings, later committing suicide. Bill Astor, who owned the hotel at the time, died from the stress (they say) in 1966.

The family gifted the property to the National Trust, where it remains today, a five-star hotel and spa ready to welcome anyone ready to plunk down 1,000 euro a night.

The wanderlust is upon me! Where would you want to go?