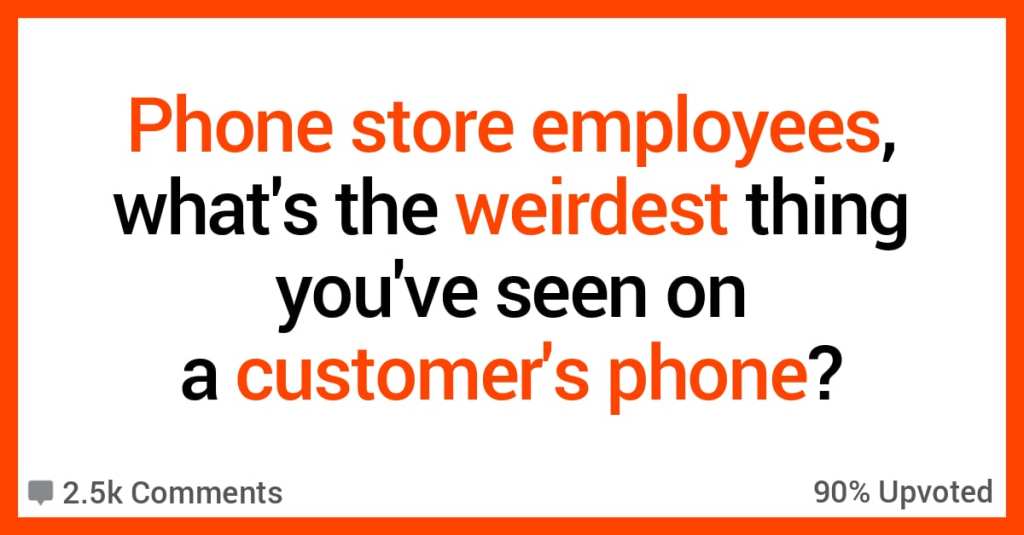 Any job that involves working directly with customers is bound to come part and parcel with awkward moments. People are weird, people are coming from all sorts of walks of life, and if people need something from you, there’s no telling what kind of attitude you’re going to encounter.

People who work at stores like Verizon, Cricket, or Apple, though, have the sometimes awkward, always interesting bonus of having access to people’s private devices, though, and they’ve got some pretty good stories out of it.

16. There is no part of this that isn’t a horror show.

I used to be a Specialist at an Apple Store. My favorite story was when I was asked to help out this grizzled taxi driver whose Mac was “slow.” His ENTIRE desktop was covered in naked jpgs of young-to-underage-looking nude asian women.

He also showed me the machete he keeps in his coat, because he’s been held up multiple times.

I work at a phone dealer so I deal with the same problem. Lots of ass cracks, only one dick, tons of confused faces. However..

I went to wipe one phone one day and it had a picture of my best friend from junior high as the wallpaper. I haven’t seen or talked to him in like 7 years as I’m in a different city and we pretty much lost touch due to different interests etc. I was completely shocked seeing as I was there all day and did not see him and he must not of seen me.

I mean, everyone has a dick or an a$$crack to put on a phone. I had one best friend and there he was on the phone that I happened to stumble across to wipe.

I still haven’t gotten in touch with him to tell him how oddly coincidental that was. Maybe this will happen again and I will see him at a ping pong show in Bangkok in 25 years. Who knows.

14. This is horrifying on so many levels.

Came in one morning to see the opening manager kind of freaking out. I was the opening inventory guy, so there wasn’t really anyone else there other than him and I. He tells me to check out the Genius Room (where the techs work on shit). I walk over, open the door.

The entire place is flooded. Turns out the movie theatre upstairs had an issue with their waste water. A few hundred gallons of literal shit water rained down in the room where all the customer’s exposed electronics are.

Management’s plan for this clusterf*ck?

Have employees clean it up, throw out damaged parts and test all the customer equipment. If the customers computer was hosed, replace it and tell them we couldn’t repair it. If it worked, give it back to them and say nothing. They put notes on the repairs in the system to replace the computer if it ever came back, for any reason.

They then thought it would be ok to send back all the affected parts, without even notifying the receiving warehouse of the fact these parts were covered in waste water.

One of the dozens of reasons I hated working for that company.

Likely too late, but I’ve been on the other side of the fence. I had a DVD in my laptop that was an “instructional” video… I was trying to learn some new moves to please my (then) boyfriend.

It’s just my laptop so I leave the DVD in there for days, and one day my computer suddenly shuts off and a puff of smoke appears. Well that can’t be good.

When I take it in they say they have to send it out to get fixed (under warranty). I forgot the DVD was still in there. I return a week later and this poor girl brings out my laptop, goes through the whole boot up thing to make sure it works and then at the very end hands me an envelope and whispers “I believe there was a movie in there as well so this is your property”.

I just said “YUP, there was”. And hightailed it out of there. So embarrassed.

It was just a typical Sunday afternoon at the Apple Store. Busy as hell, kids running around, and way too many people demanding my help all at the same time. I was helping someone with something, when suddenly, I hear a sound that sounds like nails on a chalkboard… No. Louder.

My ears had never heard such an unpleasant noise in my life.The whole store – probably 200 people, went from deafening to silent in a second.

I turned around to see what was happening when I see an old man who looked like he was in a WWI trench in his youth, screeching in on a walker with no tennis balls, with his back at about a 90 degree angle.

He ever so slowly made his was to the back of the store at the genius bar. The effect was so permanent it left two trail marks in the custom stone floors from the cutting of his walker legs.

Obviously, this man had to leave, which he did. Only to come back a few days later – welcomed by the same horror and silence.

I decided I needed to see what was going on. So I excused myself and walked to the corner of the genius bar where this man was stationed. He had a white iMac that seemed to be in the process of a data transfer drop off. Okay, normal enough. As I walk by to go into the back I capture a glance at his finder tab – only to find 267GB of the most well categorized pornography I’ve ever seen.

I mean thinks like ratings with stars, actor tags, genre EVERYTHING.

A few days later, the man vanished. Never to be seen again.

The other night we got “Nick Caged”.

Every iPad in the store had a different wallpaper photo of that bastard.

Another old couple comes in for a personal setup. They’d already bought their iPad but wanted to come back and have me show them a quick session. Okay.

9. That was not a good day for that employee.

One day I was browsing /r/cringe on my iPod and came across a post about a neo-Nazi. In the comments someone linked to the guy’s profile on a weird Nazi forum. I clicked through some of his posts there just out of curiosity to see what kind of shit was there.

Soon after that, my home button quit working so I had to take in my iPod for a replacement.

Some poor Apple employee probably had to see 30+ pages of crazy Nazi fringe material in my Safari history.

8. That would have been the day I quit.

Some kid projectile vomited on an iPad.

Someone had to literally wipe that.

7. I actually didn’t need to know this.

I worked as a specialist in a Flagship store in NYC for about a year. Every night we actually physically wiped down every product with alcohol wipes so that they would be sanitary the next day. I sh%t you not when I say we wore rubber gloves to do this.

The amount of people we had come into the store; many of which were homeless or just plain dirty was astounding. The white keyboards on the desktops weren’t always white by the end of the day.

And on the ipads, you could actually see the layout of the keyboard because of all the finger prints on the screen.

This couple in their late 60’s comes in on a really busy day. I was showing them iPads and such. The man was looking around on Safari – but he was looking up really, REALLY, weird shit. Things like Yucca Valley nuclear sites, the Al Queada homepage – just weird shit.

So anyways, he tells me he wants a 64GB Black Verizon iPad. Well shit, we sold every single one and that was the only one we didn’t have. He was pretty pissed off because he exclaimed he called in ahead of time. I think what happened was the person on phones assumed we had it and didn’t check. So for some reason he insists on calling the store to ask her again, as if that would make them magically appear. Well, too bad, because there are 16 people in the line ahead of him and only one girl on phones (typical weekend). So after awhile I just sell him a different one and go on my way. About 20 minutes later hes still on the phone so he WALKS INTO THE BACK, through the cracked door, THROUGH THE BACK OF HOUSE, and ends up standing behind the girl on phones chair – breathing over her shoulder, without anyone noticing (phone still to ear).

It was crazy, the manager saw and almost didn’t know what to do except say, “uhm, sorry, you really can’t be back here”.

I work at Geek Squad, and as bad a reputation as some of these stores have I think we have a pretty good confident group.

Weirdest thing I have seen was a man using the display computers as an internet cafe machine to bid on a car on eBay and getting annoyed because they reset every 10 or so minutes so as to stop this type of tomfoolery. But after three identical complaints I walked over and opened up the same exact eBay auction for the car and told him he would never outbid me because I have the p/w to keep the computer working ( not exactly true )

He shot me a very disturbed and confused look and exited the store after 2 hours of trying to purchase some old car off of eBay.

She totally knew what she was doing and I am pretty sure she liked our reactions.

4. Why are so many people peeing on their phones?

I worked at Vodafone, I have had to deal with:

I made a woman cry because we worked out that her phone bill was higher because her husband was cheating on her. Sad.

Dozens of moisture damaged phones. After checking them for faults then casually being informed they had been pissed on.

3. Some rules for the road.

I don’t work at an Apple Store, but I’ve been selling phones for 4 years. People have all kinds of weird sh%t on their phones.

I once had this girl who kept coming back with issues, and every single time both screens on her phone would have wallpapers of her f*cking. I’m not even joking. It was a keybo, and had one little screen and one big one. Do the f*ckees know?

One time I had to back up this woman’s phone (she was probably about 50) to one of the store computers. She had about 5 videos of some guy who was definitely drunk singing and doing hula-hoops

This isn’t really weird, but I think that the 13-year-olds who password protect their phones and their “kissing my boytoy” wallpapers are hilarious. They always seem so cheeky.

Not an apple employee, but I wiped data on phones for ModusLink, and saw between 300-350 phones a day. While I occasionally saw nudes, the vast majority of pictures were of two things.

In 2nd place, babies…usually newborns. Sometimes they were with their mother who had clearly just delivered them and I felt strange, like I was in the room on this very intimate event.

As it turns out, people really like cats…who would’ve guessed?

But damn I respect him.