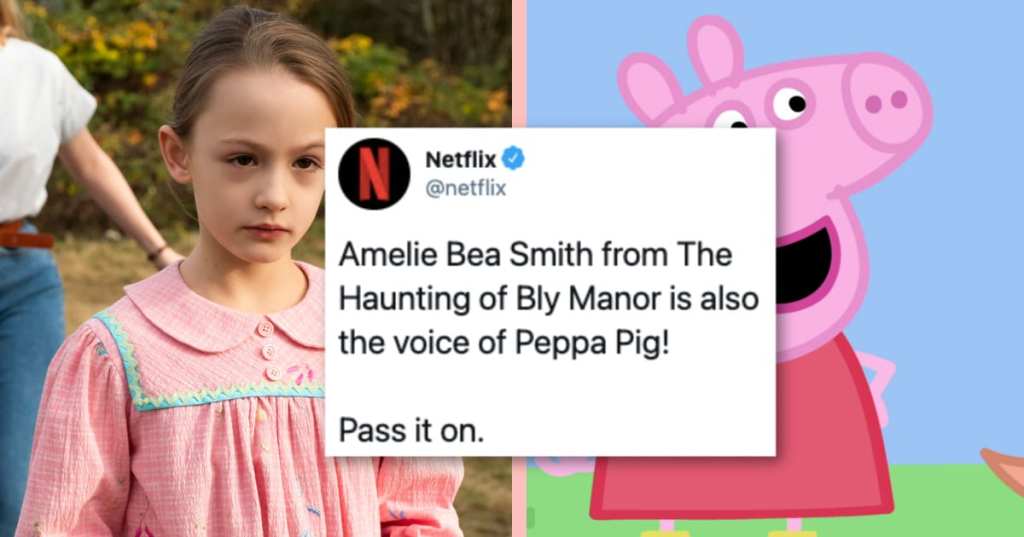 The Voice Of Peppa Pig Is One of the Stars of “The Haunting Of Bly Manor,” and People Are Losing It

Often, well-known actors or actresses take voice work, where they give a voice to an animate character. Because we already know their voices – the tone, inflection, mannerisms – it’s impossible not to know who is performing the animated words.

When an actress isn’t as well known, though, it can be a shock to learn that we heard her voice before we ever saw her on the big or small screen – and that’s definitely situation with Amelia Bea Smith, who plays Flora on the popular The Haunting of Bly Manor.

She’s also been voicing every toddler’s favorite British pig, Peppa, since she took over the role from longtime voice actor Harley Bird.

In Bly Manor, of course, Amelia plays Flora, who is about as opposite from Peppa as one can get – though she does have a similar sing-song voice and perfect fiction, which caused some on social media to muse “why does flora from haunting of bly house sound like peppa pig?”

Which was when Netflix confirmed the actresses were one and the same, saying “Amelia Bea Smith from The Haunting of Bly Manor is also the voice of Peppa Pig! Pass it on.”

Amelie Bea Smith from The Haunting of Bly Manor is also the voice of Peppa Pig!

The confirmation sent people’s heads spinning all over social media, with reactions to the “perfectly splendid fun news” running the gamut from shocked to delighted.

The perfectly splendid feeling when you find out Flora from Haunting of Bly Manor also does the voice of Peppa Pig: pic.twitter.com/gFNzanOh8U

More pointed out that the actress is doing a fabulous job of diversifying her portfolio right from the start, which is smart!

When the official Twitter page for The Haunting of Bly Manor asked “can ghosts whistle?,” people were quick to remember that, while Suzie Sheep could whistle, Peppa Pig definitely could not.

If we’ve learned anything from all of this, it’s that little Amelia can definitely pull off the crossover.

She’s got chops, she’s got a good head on her shoulders – she can do anything she wants!