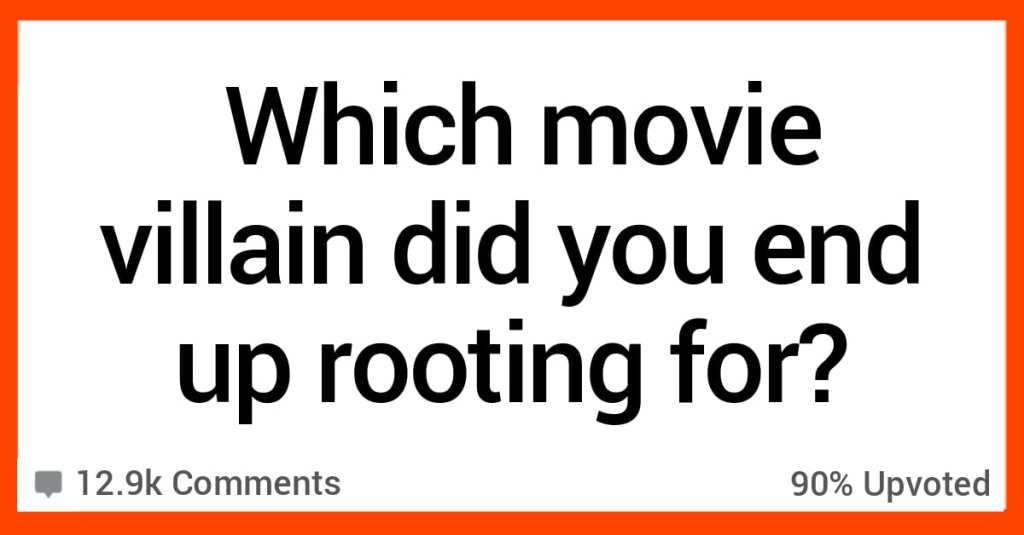 The way you know a “bad” guy is well-written is that you can easily see where they’re coming from, you feel badly for them, and you can glimpse how, through their eyes, they’re doing the right thing.

No one likes a cardboard, one-dimensional villain who is all bad and loves it, because that’s not real life.

That said, these 13 villains might be a little too easy to sympathize with…to the point that people kinda sorta want them to win.

The wolves in The Day After Tomorrow.

12. It’s hard to quibble with that reasoning.

11. Being in a concentration camp gives you real reasons not to trust the powers that be.

Magneto from the X-Men movies.

He always thought humans would try to destroy mutants and he was right because they tried.

He might have not been completely right, but man it’s hard not to feel some sympathy for him after the shitty hand that life dealt him early on.

When I saw Spider-Man Homecoming, I was like “Hey. Wait a minute.” Adrian Toomes (Vulture) actually has a point here.

The government and Tony Stark completely f%cked him over with malice aforethought.

After that opening scene, I was like “F%ck Tony Stark, I’m with Toomes on this one.”

The general from The Rock. The dude just wanted justice.

Ed Harris is a criminally underrated actor. He really makes you feel like the bad guys might actually be doing the right thing. In reality, they (like so many other villains) were doing the wrong thing for the right reasons.

He totally redeems himself in the end though, so I don’t see him as a villain in that film. More of an anti-hero.

8. This is why this movie is total crap.

He straight up kills people in A LOT of violent ways… but you still root for him because of what happened to him.

As a native, you watch those old cowboy movies and just sit there thinking…. I dunno, I’d want to kill people killing all my family too.

If a little boy chopped off your hand and fed it to a crocodile you’d probably want to kill him too.

5. The humans are always out attacking first.

The Machines from the Matrix.

The humans attacked first, going as far as blocking out the sun to end them.

The machines create a new reality for the humans that is much better than the alternative of living in the sewers in the real world. The only reason Agent Smith became problematic was because Neo gave him new code.

4. He still needed to be stopped, but…

Making stronger versions of existing Pokémon is basically the point of Pokémon breeding.

3. Someone has really thought this one out.

Prince Nuada: The humans… the humans have forgotten the gods, destroyed the earth, and for what? Parking lots? Shopping malls? Greed had burned a hole in their hearts that will never be filled! They will never have enough!

King Balor: What humans do is in their nature. To honor the truce is in ours.

Prince Nuada: Honor? Look at this place! Where is the honor in this? Father, you were once a proud warrior. When did you become their pet? [turns to the council] Prince Nuada: I have returned from exile to wage war and reclaim our land, our birthright! And for that I will call upon the help of all my people and they will answer. The good, the bad… [holds up the crown piece] Prince Nuada: … and the worst.

King Balor: [puts a hand to his own crown piece] The Golden Army? You cannot be that mad!

Prince Nuada: Perhaps I am. Perhaps they made me so.

2. He definitely has his reasons.

He’s an escaped slave who is pissed he, his girlfriend and friends will die soon anyway from four year lifespans they were genetically engineered with.

The main people he and his group kills or injures are morally bankrupt genetic engineers who became rich off slavery and corrupt racist cops.

She was just doing all the right things for her career and she showed all characteristics that’d let her thrive in her wanted environment and she was chastised for it.

I love a good villain, don’t you?

Who would you add to this list? Tell us in the comments!