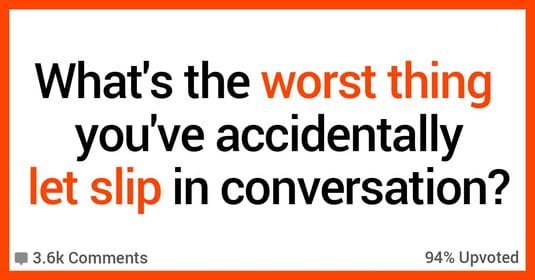 These 14 People Had the Worst Accidental Slips Ever

Most of the time our brains are on our sides. We can control them, they do what we ask, and all is right with the world.

There are those times, though, when they misfire. They betray us and barf out the wrong thing at the wrong moment, and we wonder how we will ever show our faces in public again.

Those are moments these 14 people know better than most.

I casually mentioned that I’ve done “all sorts of drugs”.

Didn’t realize what I said until I said it.

13. I need some more information.

I told my step mom about my foot fetish.

Now she always wears socks when I’m around.

I got tricked into admitting to one of my best friend’s very recent ex that he had cheated on her.

I wouldn’t have been talking to her at all, but she had a very extreme reaction to the break up. She locked herself in their apartment and had been threatening to kill herself.

At one point, she said ‘You know he cheated on me, right?’

I was once trying to score with a girl in the pub after a long relationship breakup, so my speaking to girls skills were a bit rusty.

I was a bit nervous so I ended up saying “I love fucking dogs” instead of “I fucking love dogs” and didn’t notice. She understood that I was a dog rapist and left..

10. That will definitely ruin your night.

I asked the wife during an intimate moment if she remembered the lap dance she gave me to a song that came on Spotify, then went on to describe the lingerie she was wearing and the way her perfume smelled.

After getting an “I should murder you and bury your bones in the garden” stare down I realized that it was not my wife in this memory and my night was ruined.

Not me, but a girl I was dating once had told me she lost her virginity to me. Then, a few months later, we were hanging out with one of her friends and she told a story about a guy who she had slept with and then told her he had had better.

So she was either a. Cheating on me. B. Lied about losing her virginity. Or c. Making shit up. She immediately realized what she had said and after a long while whe apologized and admitted to cheating on me.

8. Never mention weight when the womens are involved.

2 years ago, I was talking in a group with basically the girl of my dreams. And my buddy, who is a football player, started talking about his weight and asked how much us guys weighed. And I’m a cross country runner so I’m fairly skinny.

I was like “Oh I’m really light, like 115lbs, I wouldn’t be surprised if [girl of my dreams] weighs more than me.”

In my mind, I was thinking that since she was the next smallest person there, I would compare myself to her, because we were both light weight. But how it came out to her was, I called her fat straight to her face.

My best friend and I were talking while watching my kids play outside. I didn’t realize they had come up to ask a question and we were talking about some not so good stuff that happened to us in Iraq and he said, “what about the dude you beat to death?” and I said, “it’s a lot different than shooting someone.” My 12 year old said, “you’ve killed someone?” And my oldest smacked him in the arm and said, “at least two. Pat attention.”

That was a really awkward conversation to have with them. I never planned on telling them what I did in the Army. They knew I fought in the war but didn’t know any specifics.

Good news out of it though now neither of them wants to join.

Back story: my best friend and I made out once. We realized it made things awkward and never spoke about it again.

Fast forward to this last year. I just moved in with my boyfriend and asked if we could have a small house warming party.

My boyfriend asked who I wanted to have over and I said my best friend Mike.

He’s very sarcastic and loves giving me a hard time about virtually anything, but I couldn’t believe I let that one slip. It wasn’t that bad, but it was pretty embarrassing to say the least.

5. When you wish the floor would swallow you up.

oh man… I don’t even remember what the game was, but a bunch of people were trying to get me to guess a word by giving me clues. We were playing with a bunch of my wife’s college friends.

Several days before this game my wife had told me (privately) that one of her male college friends (we’ll call him “Ace”) used a butt plug with a past college gf of his. Not a big deal, but certainly not public information, and not known to Ace’s wife (who was present during this game).

Well I had no clue what word they were trying to get me to guess, but someone said “Ace’s nickname!”. Being the dumbass that I am I thought of the most recently learned thing I knew about Ace, and responded with “I don’t know, BUTT PLUG?”… I will forever remember the silence that lingered afterward.

Long story short. My best friend was engaged to a girl that I had slept with in the past. I was 18 at the time. We were in our 20s when they were engaged. I had no idea it was her. Keep in mind, her, him, my wife, and myself hung out all the time. He was/is my best friend.

One night at dinner we were talking about where we all used to work. “wait. you worked there? I worked in the building right next to it…when?…oh wow, so you worked there when I worked there…I once hooked up with a girl named name from there….”

Then it all flooded in…….embarrassing. They got over it, but she ended up leaving him anyway over her being stupid.

3. Not the best turn of phrase.

A guy I worked with for a couple years older brother killed himself. Fast forward a month and he comes to visit the restaurant we worked at together and somebody jokes, who orders a non alcoholic beer? what does stupid fucking me say? “I would rather kill myself than drink a non alcoholic beer”.

Instant shame, regret, horror, you name it. I’ve never felt so terrible saying anything in my life.

Once when I was a kid My step-mom’s niece came over to my house and I mentioned her dad being in prison, though she was not supposed to know about that she cried in front of everyone while I was the fault no body told me that was supposed to be secret.

1. We forgive the drunks.

I was once super drunk and casually mentioned that I had made a suicide attempt.

So, so thankful these didn’t happen to me. At least, they didn’t today.

If you’ve got a similar story, please tell it to us in the comments!