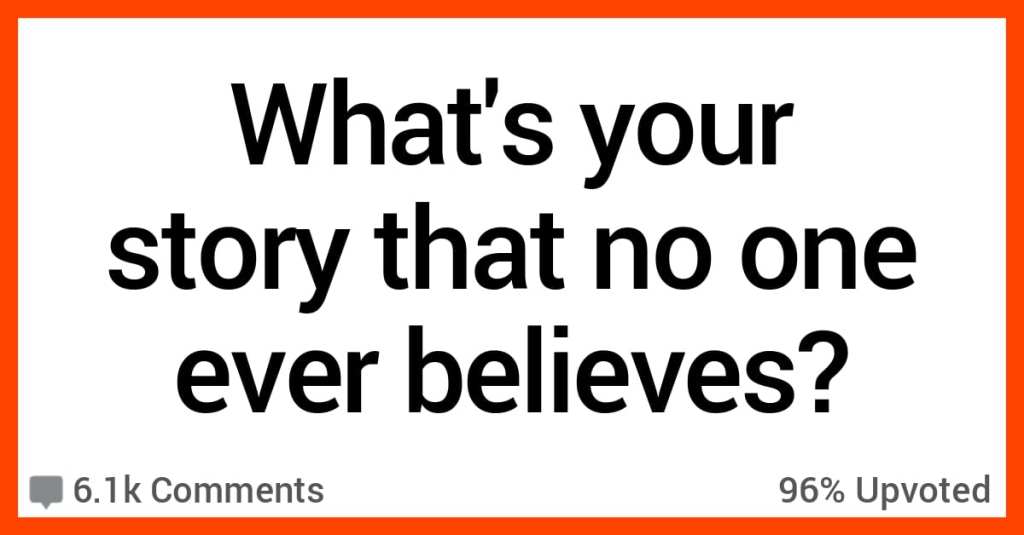 One of the most horrible feelings in the world is watching something insane happen, or having something unbelievable happen to you, and no one being around to witness it – because you know for a fact anyone you tell is going to call you a liar.

That’s exactly the experience these 14 people in these situations, so take a read and decide whether or not you think they’re telling the truth.

14. What could have been happening?

When I was a kid, I got a shoebox and filled it with some sand, a pile of sugar, and a few ants, like three or four. I brought that box into the house and put it in my cabinet. I forgot about the box for like two days.

When I went to check the box, because I thought the ants couldn’t get out, I saw something that still seemed insane to me. But I know what I saw.

A military style formation of ants, in a large rectangle, sorted by sizes with the smallest ones in front.

Like two (might have been four) big ones in front of the others facing the formation. The large ones were facing away from the cabinet doors. The ants remained still for like two or three seconds then scattered in every direction.

13. When you can’t quite believe your eyes.

I watched a kid on his bike get hit by a car somehow he got up like it was nothing.

Shock and adrenaline are a helluva drug.

I couldn’t believe it myself but I took it straight to the ATM and it was accepted.

My grandad raised a crocodile in my mums backyard pool on an island, while she was growing up.

Every so often they would take him out to sea and try to release him, but a few days later he would come crawling up the local boat ramp, going home.

He killed the neighbours chickens a few times. They didn’t like him so much.

When he was taken into care at a crocodile park, they flew him on a plane to the mainland. He is one of the top 5 biggest crocs at his wildlife park.

My wife has an artifact (reflective metallic nose ring looking object) embedded in her lower left rib cage between the bone and fatty tissue. It was discovered after an MRI for unrelated issue.

9. You can’t be selfish with a gift from the universe.

i once left my house in nothing but a tshirt and sweatpants in a suicidal manic-depressive state, bought a pack of cigarettes, and told the universe that if it couldn’t give me a good reason not to kill myself by the time i finished the pack, i’d do it.

i ended up seeing Daniel Radcliffe smoking a rollie outside of a starbucks. i offered him a “real cigarette” pretending to have no idea who he was. “oh, no thank you,” he said. “i much prefer the ritual of rolling my own.” what i COULD have said was well ya that makes sense seeing as how yr a wizard. what i DID say was hi i’m [PhDVa], what’s your name?

given my pact, and with nothing to lose, i unloaded all my emotional baggage on him right there. we ended up talking on the curb for half an hour. he asked me about my tattoos and listened to me recite Shakespeare. eventually he touched my shoulder, looked me in the eyes, and said “i know there’s no good way to say this, but please don’t kill yourself.” he asked me some reasons why i don’t. “well, my cat, my mom, my brother—” “right, well, i’m glad the cat came first.” totally charming. finally he announced that he was going to “wander off that way.”

i’d left my house without my phone due to the nature of my pact with the universe (having nothing but the cigarettes on me to distract me from my angst was part of it) and so made no attempt to follow him or to get his number. (i went back to that starbucks several times over the coming weeks to no avail. i still don’t regret not trying to give him my number, though, as it would have violated the spirit of the pact. you can’t get selfish with a gift from the universe like that. bipolar people may understand what i mean. in any case, acknowledging his fame or getting all stalky would have broken the spell.)

My old boss has a NXIVM brand. I saw it when she reached up to get something and panicked because it just seems rude to POINT OUT THE BRANDED SKIN on another person. I immediately recognized the symbol and it was surreal. I was immersed in podcasts and stuff about that at the time.

NXIVM was (is?) a cult that started as a mlm company and somehow progressed into young women starving themselves, being branded with an old guy and a random b list actresses initials and LARPing slavery. It’s a lot more but there’s the gist.

One day I noticed my dog standing at the glass door with something in his mouth. It was a $5 bill. We went to BK and grabbed him a cheese burger for a reward.

The next day he was at the door with a $1 so we got him another burger. Figured it was only fair as he paid for it.

Got a hole in 1 playing golf by myself with no one else around me on the course.

Most of my friends take my word it but still give me a hard time saying it never happened.

5. I hope they kept the stick.

I held a stick straight up in the air while pretending to be a magical creature and then it immediately started raining heavily.

I found and caught a shiny Ho-oh first time playing Pokemon Gold. All my friends thought I cheated.

My cousin and I each got Diamond and Pearl back when they came out and I saw that the very first Pokémon he ran into (before he had access to pokéballs) was a shiny Shinx. He even wanted a Luxray on his team and he’s still pissed about it to this day.

I just walked around for about 15 minutes and tried to open a bunch of doors (which were all locked).

There was major construction happening on the west side of the building at the time. They were digging large holes around the foundation and surrounding areas and they had built a small temporary enclosure around one of the doors.

My three buddies and I had just graduated highschool and decided to wander around downtown, under the false hope that only 18 years olds can muster that doing so would somehow get us laid.

We climbed up a dark stairway on the hill at the back of parliament and reached the rod iron fence with a locked gate at the top. We could see two security guards (or, upon reflection, they were probably RMCP) who were doing rounds of the entire construction area, since it basically left the side of the Parliament building open.

My one buddy dared someone to try and sneak in. I was easily the most timid of the group, I couldn’t even bring myself to speak to girls on most days. But for some reason that night I gave zero fucks and just hopped over the fence while my buddies loudly whisper-hissed for me to come back.

I ran between the various CAT construction equipment, trying to stay in the dark patches, pausing to watch and memorize the route the two security guys were taking. The temporary door to the small enclosure was unlocked, I had seen one of the guards open it from our hiding spot behind the fence.

I sprinted the last 15 yards or so which were illuminated by construction flood lights and in the open, certain I’d be caught, but I made it into the door without making a sound. The actual door to parliament on the inside was open, so I just went inside.

The harder part was sneaking back out, I had to retrace my route and because I had been inside in the light for so long, my eyes had adjusted so I couldn’t see shit once I made it back to the darkness of the construction equipment. I nearly tripped a half dozen times on my way back to the gate.

My buddies had bailed on me within five minutes, assuming I’d been caught and wanting to put as much distance between me and them. I eventually found them at the base of the hill near the river, where I was met with a mixture of high fives and questions about my intelligence.

None of us got laid.

When my grandpa passed away in November of 2008, I was at my dad’s house. The front yard is almost enclosed by pine trees. I kept hearing weird noises, so I decided to go outside and see what it was. We shown a light on the trees and was greeted by many many pairs of eyes.

There had to be at least 20 owls just hanging out in the trees. My grandpa had an interesting way with birds and we had a very close bond. That was the only time the owls had ever been to our house.

Until my Mastiff passed away last year. I was home alone, brushing my teeth when I heard the familiar sound. I thought I was going crazy, but no. There they were, owls in the trees. A completely different time of year, twelve years later. The owls keep watch.

My husband and son were watching ants filing into their hole with their loot. One ant was carrying a piece of wood, but couldn’t get through the hole with it. It kept trying, holding up the line of other ants. Upon closer inspection, my husband see it’s actually been impaled with a sliver of wood. He picks up the ant and carefully removes the wood, and the ant fits down the hole.

As someone visually impaired, this a much different world than the one I live in.

I’m dying. I would have freaked out at some of these!

What’s your “no one will believe it” story? Share it with us in the comments!