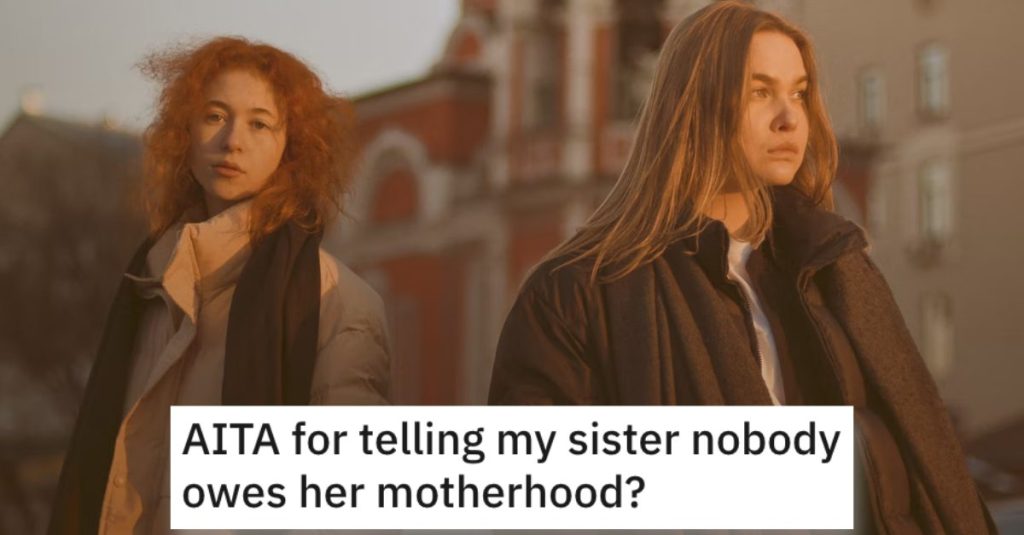 They Told Their Sister No One Owes Her Motherhood. Were They Wrong?

Things can get pretty touchy when it comes to women and whether they’ve had kids or not.

And this can lead to some pretty dramatic situations.

Take a look at this story and see if you think this person was wrong for what they said to their sister about motherhood.

AITA for telling my sister nobody owes her motherhood?

“My oldest sister is 40. She always wanted to be a mom but some complications meant she was never able to be a biological mom.

In her 20s she met a widower with young kids and married him, admitting her intention was to become a mom through them. Her stepkids were never okay with her like that and for the last 16 years she has struggled to come to terms with the fact not one of them considers her their mom or embraces her like she would like. This is something she always complains about when she’s around our family, especially me and our sisters.

Three years ago one of my sisters was expecting her third child and she was going through a lot and struggling with her pregnancy. She wasn’t sure they could handle a third child and worried about financials because her husband had a new job that paid less than his old one (the old one folded a few months before that) and they had already made adjustments to factor in the new household budget.

My oldest sister harassed her for months about letting her adopt the baby, going as far as going to our BIL about it and telling him she wanted the baby and he should talk our sister around. It never happened but it did harm her relationship with the rest of the family.

I gave birth to my second child in November and had a procedure to make sure I had no more kids. Both my pregnancies have been awful on my body, and I didn’t want to risk putting myself through that again. My sister brought this up last week. She said I was selfish to sterilize myself before offering to be a surrogate for her and that I could have given her my youngest to adopt at the very least.

I told her I wanted my kids so I would never ever give one of them up like that. She said her dreams of motherhood were important. I told her nobody owed her motherhood though and the way she was carrying on was wrong, and concerning, and she had brushed aside our concerns before, but she needed to get some help because she can’t keep demanding others give her kids.

She flipped out and started screaming that as her family we should want to help her reach her dream of motherhood and we should be more understanding because she gets s**t on by her stepchildren and doesn’t get any of the joy the rest of us have.

We have been sensitive for years. We encouraged her to speak to someone countless times. But she keeps going on like this and it is concerning. Her marriage has felt the strain of it all. But I know I might have been harsh saying we didn’t owe her motherhood which is why I’m here.

This reader said that this woman’s sister needs serious help. 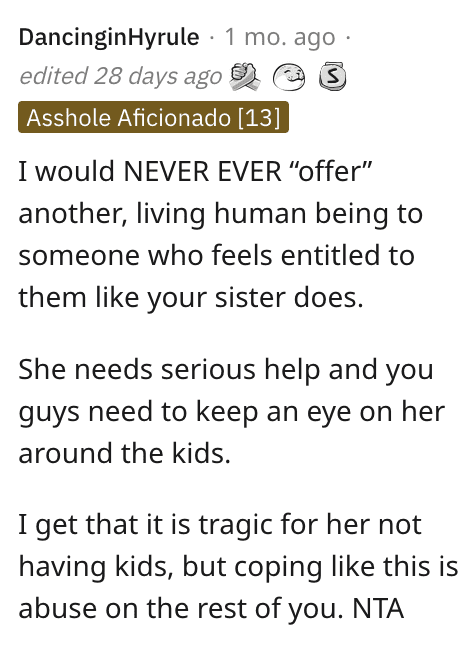 And another individual made a good point about people who feel like they are “owed children.” 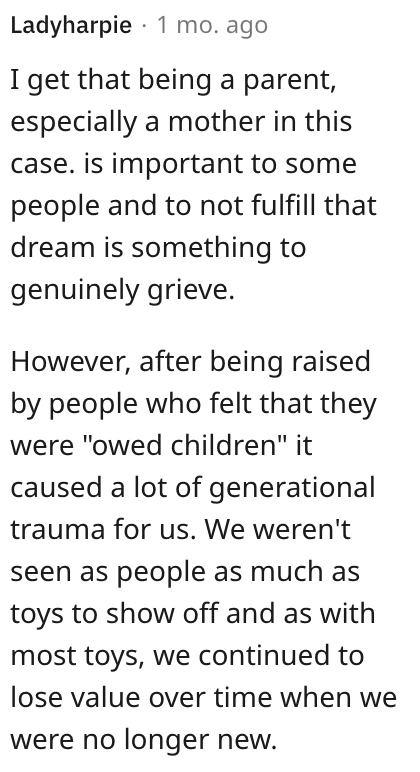 And this Reddit user said they are grateful she can’t have kids based on the way she’s acting. 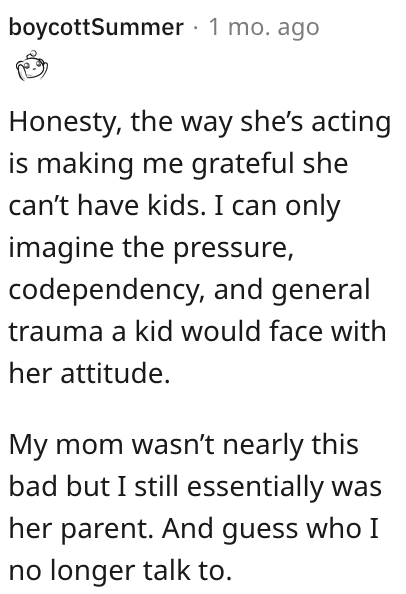