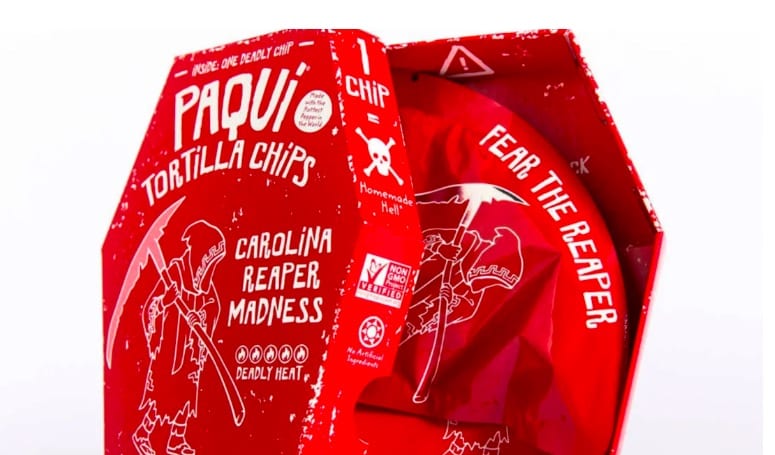 Extreme spice lovers, meet your match. This brand of chips is so spicy that you only get one chip in a package because that’s presumably as much as you’ll be able to eat before you dissolve into a puddle of tears and snot. In fact, you probably won’t even make it that far.

Paqui Chips are dusted with Carolina Reaper Pepper, which is the Guinness World Record holder for the hottest pepper in the world. Carolina Reapers contain incredibly high levels of capsaicin, a compound that triggers messages of heat and pain to the body. The peppers gained the name “Reaper” not because they will literally end your life with spice, but because of the shape of the tail of the pepper.

In continuance with the whole death theme, though, a single Paqui Chip comes packaged in a coffin. Eating the chip isn’t the same as eating the actual pepper, but it’s still incredibly hard. Most people who have attempted to eat the chip haven’t been able to finish even one.

Look what @paquichips sent!!!! This is the infamous “One Chip Challenge”!!! It is “new and improved” and apparently “more ominous than before”. Ohhhh, this is going to get CRAZY!!!

Facebook Live Video when @RDeLucaWX and I eat the chip? pic.twitter.com/D3wQiLAcTg

Paqui first released the chip in 2016 as part of the One Chip Challenge. The challenge went viral, so Paqui brought it back in 2017, and now it’s back again.

“For the last two years, we’ve received everything from love letters and polite requests, to absolutely desperate pleas for us to bring back the #OneChipChallenge,” Paqui Brand Manager Caitlin Moralic announced. “While Paqui has a line of truly spicy chips perfect for everyday snacking, our fans want to test themselves with even more real peppers and real heat, and we’re excited to bring them the spiciest challenge yet…. Incorporating the Carolina Reaper in the #OneChipChallenge is a fun — albeit sometimes painful — way for our fans to see whether or not they can handle the heat.”

One chip goes for $6.99, and a 10-pack costs $59.90. You’ll have to wait to get your hands on one, though, because they sold out almost immediately. People apparently love to be in pain!