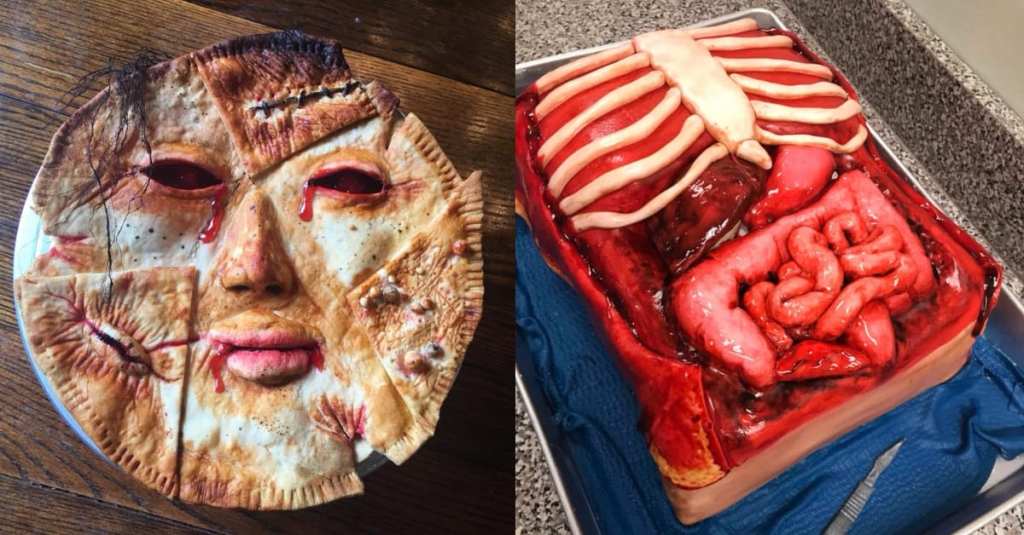 Some of these look too good to eat. Or maybe too grotesque, depending on who you are.

If you’re looking for something a little different this Halloween (or maybe for your wedding or a birthday party), you should definitely check out a company called Guy Meets Cake.

Andrew Fuller is the man behind their macabre creations, and the designs are so cleverly and skillfully rendered that they really aren’t for the faint of heart. Take this one, for example.

How would you like to bust that out during a fancy dinner party and see the look on your guests’ faces?

Fuller fully admits he has a fascination with Ed Gein, a murderer and grave robber from Wisconsin who was the inspiration behind such films as The Texas Chainsaw Massacre, Silence of the Lambs, and Psycho. Gein was known for digging up graving late at night and making furniture, masks, and other knickknacks out of the bones and flesh of the deceased.

Fuller said of Ed Gein, “Listen, don’t kill people. I don’t condone it. But he was creative and that left quite the impression. Dark though it may be, I would’ve made a beautiful lampshade.”

Fuller said he has to be thorough when he bakes his creations: “You have to be strategic with size and proportions when you make them, because they are dough. You have to consider how much certain details may expand or warp during baking.”

Let’s take a look at some more of Fuller’s edible masterpieces, shall we?

Wanted to give a quick shoutout to an incredible artist friend of mine. @guymeetscake is one of the most talented people on IG, just look at these creations, and yes, they are CAKES!! Give him a follow! (P.S: he's also into spooky fun stuff like me???) #cakes #art #baker #guymeetscake #spooky #artist #cakeart #cool #talent #confection #yum

A true artist, that’s for sure. Happy Halloween! And be careful what you eat!