The list of things to go over with any potential spouse before tying the knot seems to be getting longer and longer these days. For some inexplicable reason, there’s a new one to add to the list: if you’re looking to procreate someday, you might want to find out what your potential spouse’s views are on vaccinating your future children.

According to the CDC, rates of vaccine refusals for non-medical reasons are on the rise, and we’re seeing outbreaks of previously all-but-eradicated diseases because of it.

The issue is more and more relevant, and, as this new dad found out, you’d better not assume the person you walked down the aisle with shares your views on the subject. 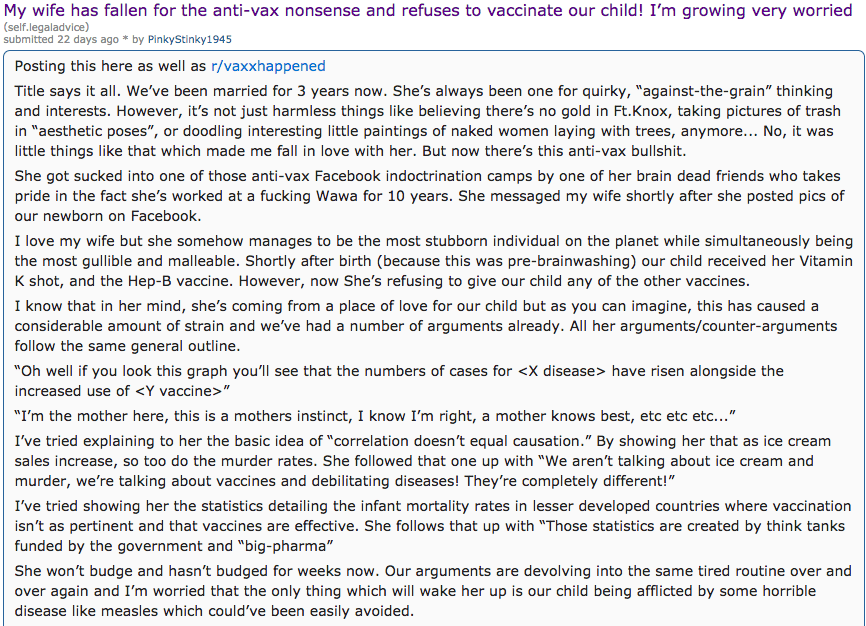 Title says it all. We’ve been married for 3 years now. She’s always been one for quirky, “against-the-grain” thinking and interests. However, it’s not just harmless things like believing there’s no gold in Ft.Knox, taking pictures of trash in “aesthetic poses”, or doodling interesting little paintings of naked women laying with trees, anymore… No, it was little things like that which made me fall in love with her. But now there’s this anti-vax bullshit.

She got sucked into one of those anti-vax Facebook indoctrination camps by one of her brain dead friends who takes pride in the fact she’s worked at a fucking Wawa for 10 years. She messaged my wife shortly after she posted pics of our newborn on Facebook.

I love my wife but she somehow manages to be the most stubborn individual on the planet while simultaneously being the most gullible and malleable. Shortly after birth (because this was pre-brainwashing) our child received her Vitamin K shot, and the Hep-B vaccine. However, now She’s refusing to give our child any of the other vaccines.

I know that in her mind, she’s coming from a place of love for our child but as you can imagine, this has caused a considerable amount of strain and we’ve had a number of arguments already. All her arguments/counter-arguments follow the same general outline.

“I’m the mother here, this is a mothers instinct, I know I’m right, a mother knows best, etc etc etc…”

I’ve tried explaining to her the basic idea of “correlation doesn’t equal causation.” By showing her that as ice cream sales increase, so too do the murder rates. She followed that one up with “We aren’t talking about ice cream and murder, we’re talking about vaccines and debilitating diseases! They’re completely different!”

I’ve tried showing her the statistics detailing the infant mortality rates in lesser developed countries where vaccination isn’t as pertinent and that vaccines are effective. She follows that up with “Those statistics are created by think tanks funded by the government and “big-pharma”

She won’t budge and hasn’t budged for weeks now. Our arguments are devolving into the same tired routine over and over again and I’m worried that the only thing which will wake her up is our child being afflicted by some horrible disease like measles which could’ve been easily avoided.

I am in Florida. Is there anyway I can sneakily just bring my child to the doctor and have her vaccinated without my wife’s knowledge? What are my options here? Legally speaking, what kind of leeway do I have? I don’t want this to lead to divorce but I just feel quite lost at the moment.

He’s tried convincing his wife that vaccines are the way to go but she refuses to listen to logic and/or science, and he was looking for advice on whether he could get his child vaccinated on his own and, maybe, how to avoid getting a divorce in the process. 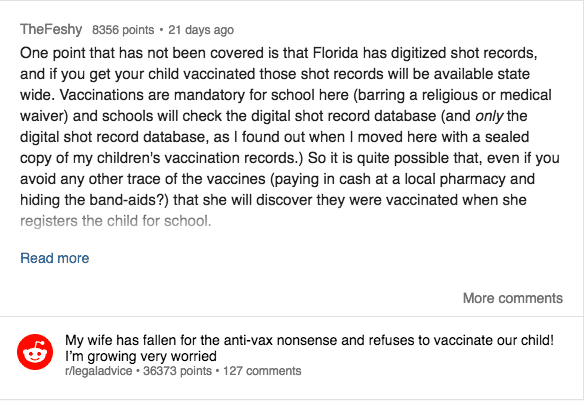 I mean, he asked the legal advice subreddit for help – not r/relationships – and I think they handled it nicely.

And if he takes off the Band-aids after it’s all said and done, she’ll probably never know the difference, and the kid won’t become another unfortunate statistic.