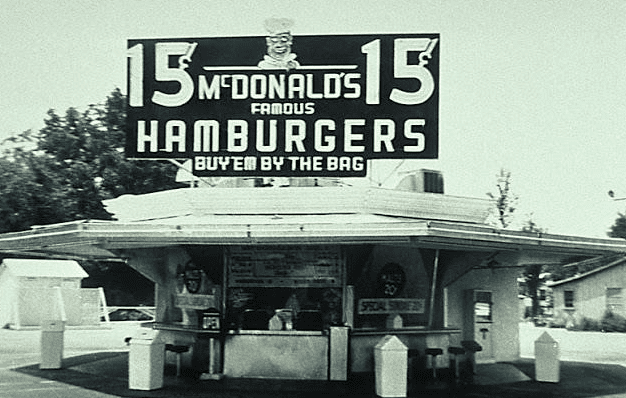 It was all the way back in 1948 that Dick and Mac McDonald opened the first McDonald’s restaurant in San Bernardino, California. The McDonald brothers invented the “Speedee Service System”, which we all know today as “fast food,” and their restaurant became a huge success.

Seven years later, in 1955, Ray Kroc opened the first franchised McDonald’s in Des Plaines, Illinois, and the rest, as they say, is history.

Today, there are 36,000 McDonald’s restaurants operating around the world, and the franchise is recognized as an American icon (for better or worse).

Take a look at some of these snapshots of the original McDonald’s location.

Today, the site of the first McDonald’s in San Bernardino now operates as a museum. If you’re ever in the neighborhood, stop by for a visit!

And, FYI, the oldest operating McDonald’s is in Downey, California, and it looks almost exactly the same as it did when it opened in 1953.

Look there, it's Speedy Mc.Donald's 1st mascot ?? I Never stop to think? this is the oldest Mc.Donald's in the world ? ? here in Downey lol our city's clam to fame ?? it's an old fashion walk up window and all. If you get a chance Watch the move "The Founder" I don't know how I feel about Mc.Donald's after watching it ?? poor Brothers ??????☹️☹️☹️

A true piece of Americana right there.