Man Buys Gas Heater, Then Has a 4-Year Battle with Some Birds and Takes Pictures of Everything

Some people love birds. Others are creeped out by our feathered friends, perhaps because of how they’ve been depicted in some television and movies. Most of us, I would guess, fall somewhere in the middle – we’re fine with birds as long as they don’t encroach on our territory.

Or, you know, gather by the thousands on our lawn.

This particular battle began when Imgur user atomicrabbit2 moved into a new house with a lovely gas heater. The exhaust, tucked away in a corner on the porch, must have looked like nice, safe, warm place to build a nest. He first noticed the birds back in 2014 but didn’t think much of it….until they built their nest, and the bird droppings started to dot the porch below the exhaust box. 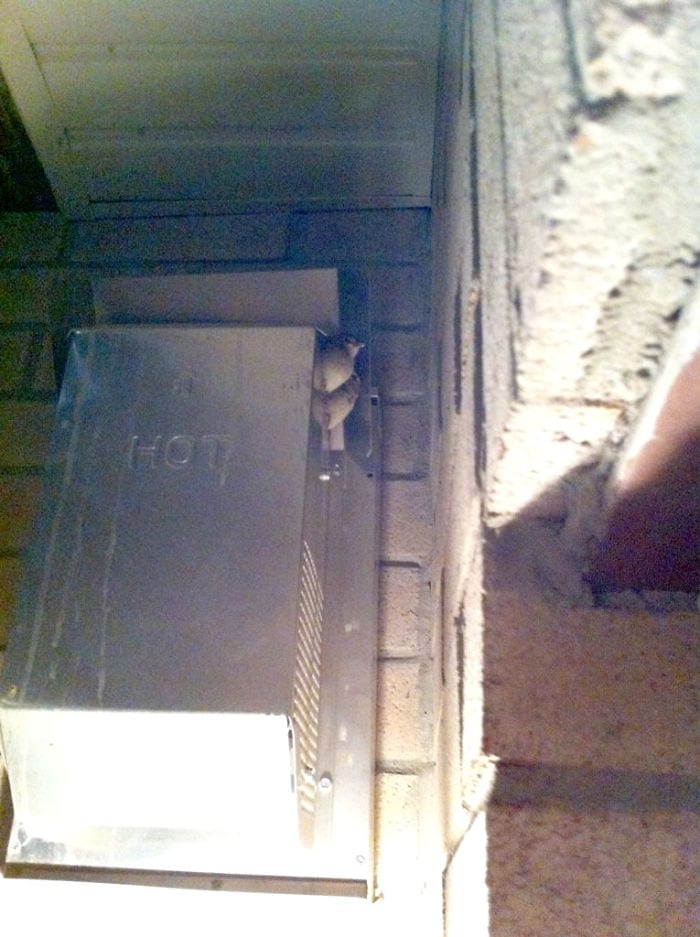 So, in the spring of 2015, the battle began. He wrapped the box in chicken wire. Easy peasy, right? 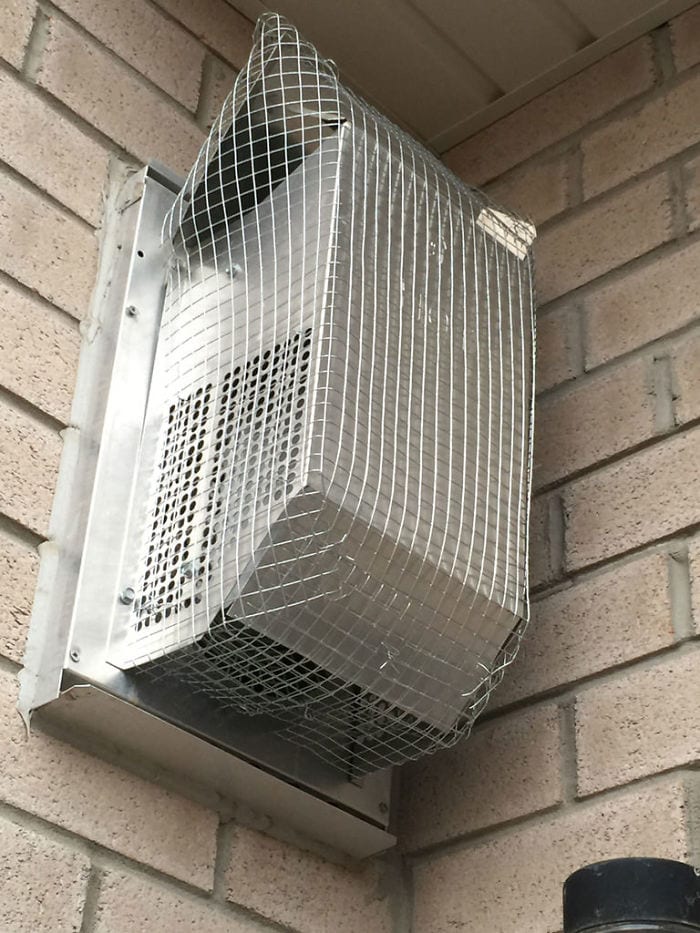 Wrong. He missed a spot, and the birds built a sweet little nest in the crevice. Since there were no eggs or babies, though, he evicted them and decided to try harder next time. 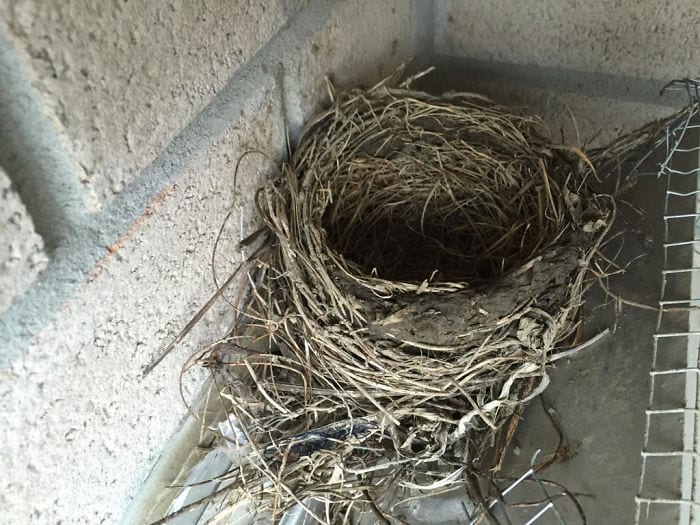 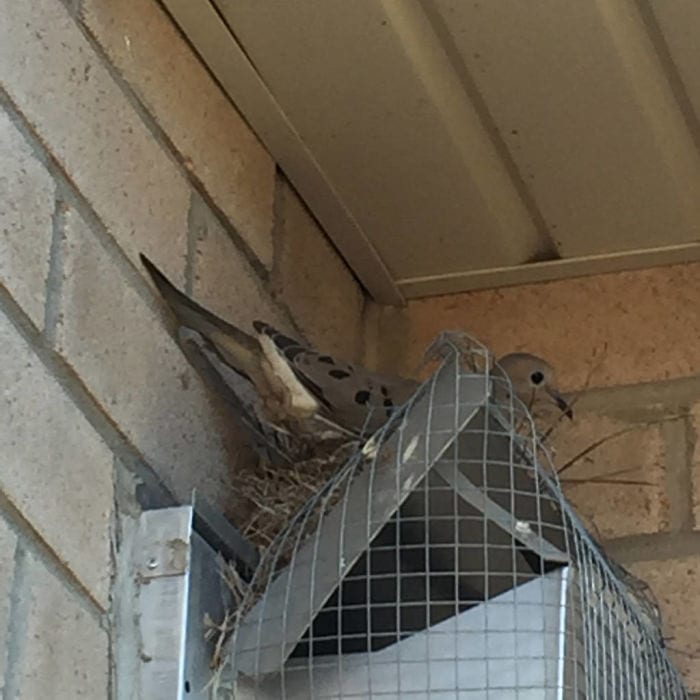 Fast forward to the spring of 2016 and he’s added bird spikes, which, he relays, seemed to have the opposite of his desired effect and actually stabilized their nest (which they decorated with twine). 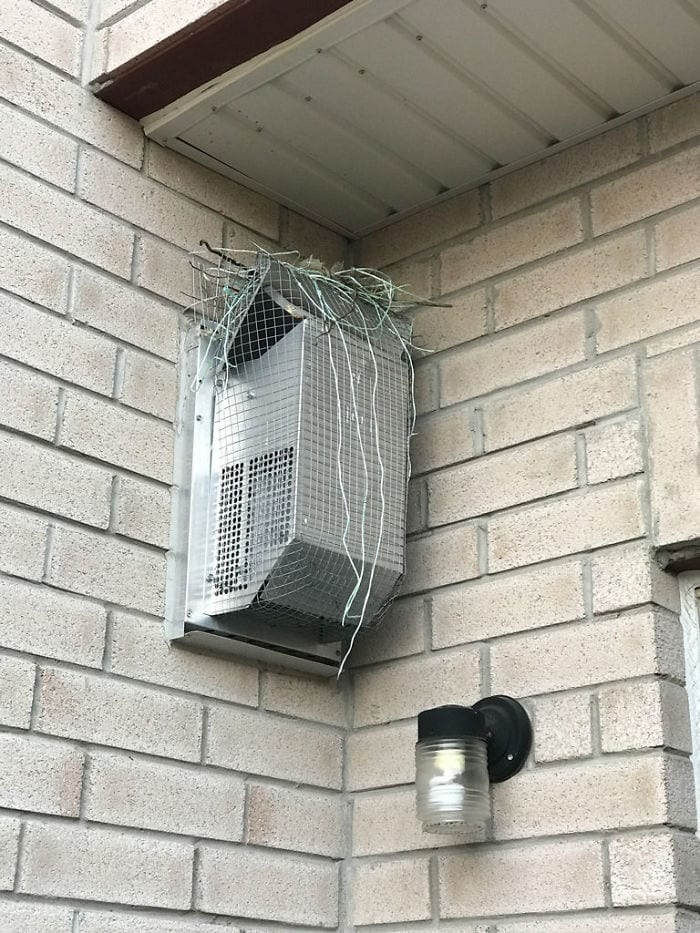 “It not only didn’t keep them away, but the spikes seemed to stabilize their nest. This time they brought coloured twine! I cleaned out the nest, next day they came back with more blue twine. Cleaned it out, and THEY CAME BACK AGAIN WITH MORE GODDAMNED TWINE. They must have a stockpile somewhere.”

Clearly, things were getting serious by 2017, when he tried (and failed) with additional bird spikes. 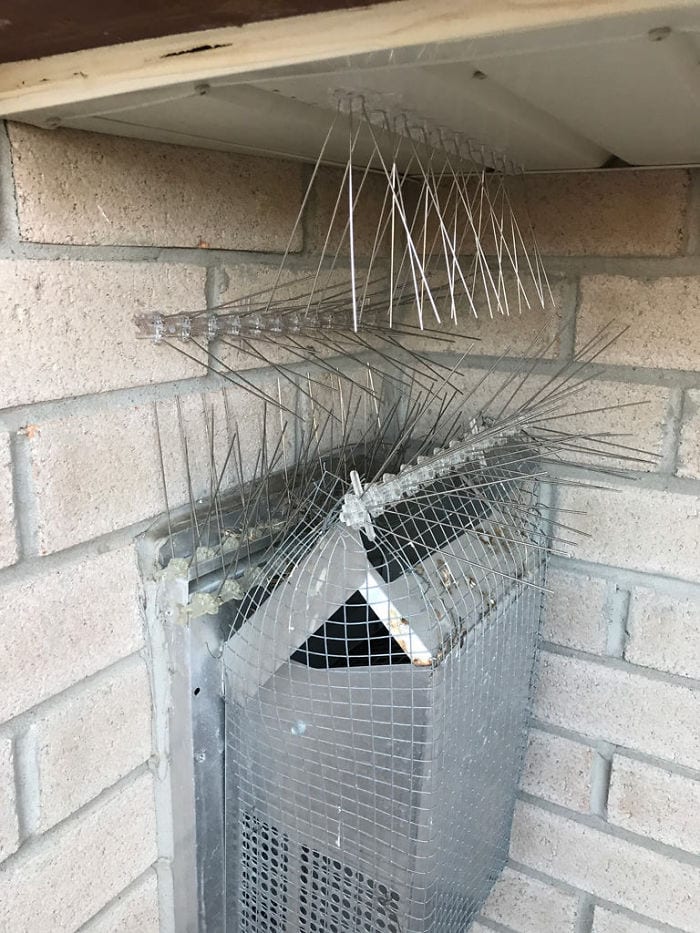 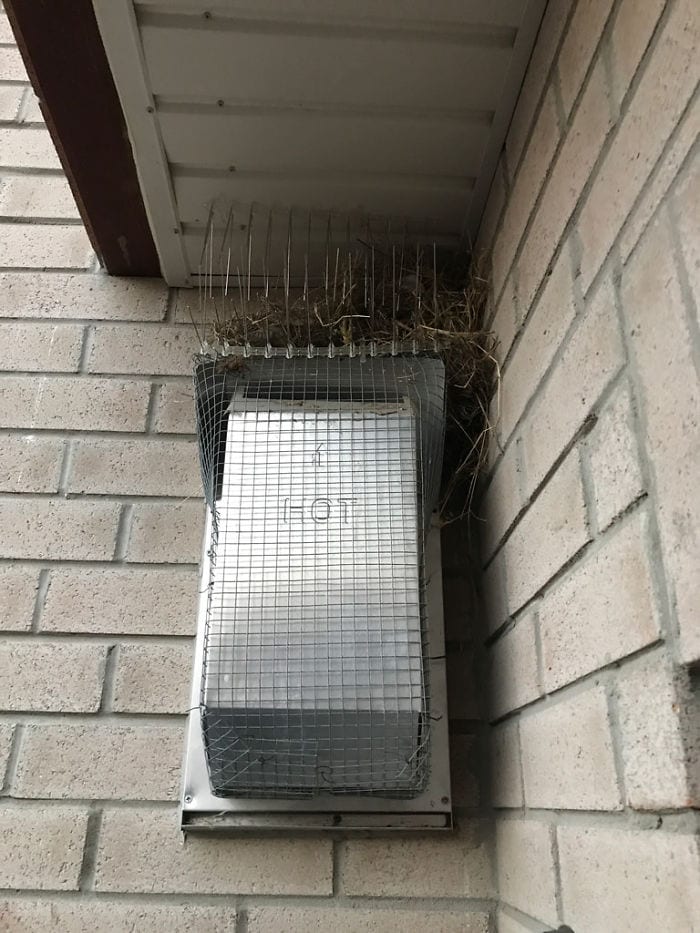 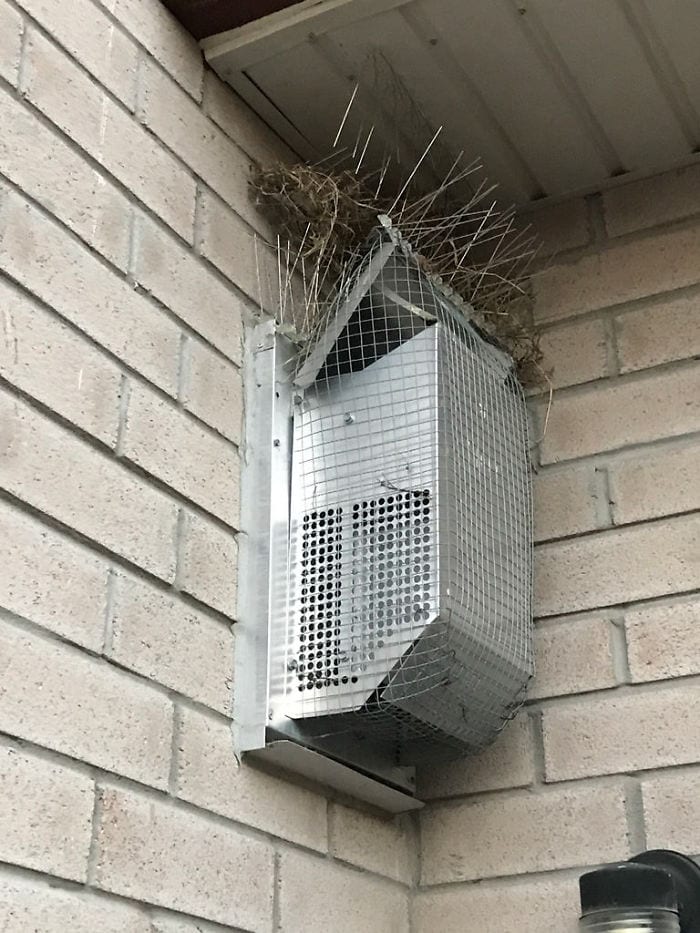 Then with wire and spikes going all the way to the roof of the patio. 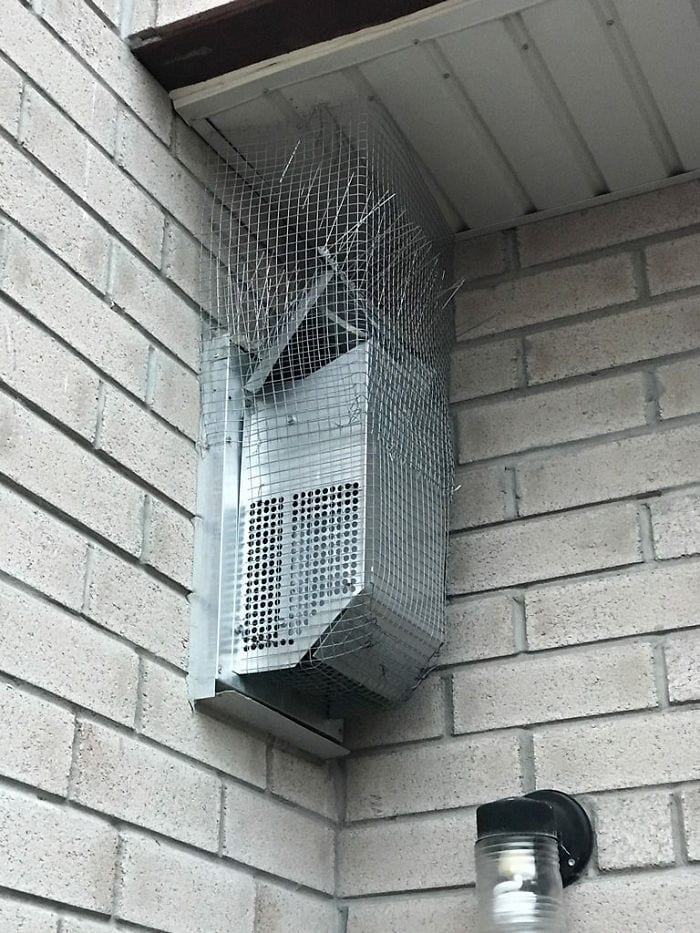 Which is when he realized he had basically built the birds their own private, gated community in this May 2018 update:

“What the absolute f*ck??! HOWWWWW???!! So apparently, I left a small opening on the right side. Those birds were flying up into their now high-end GATED F*CKING COMMUNITY.” 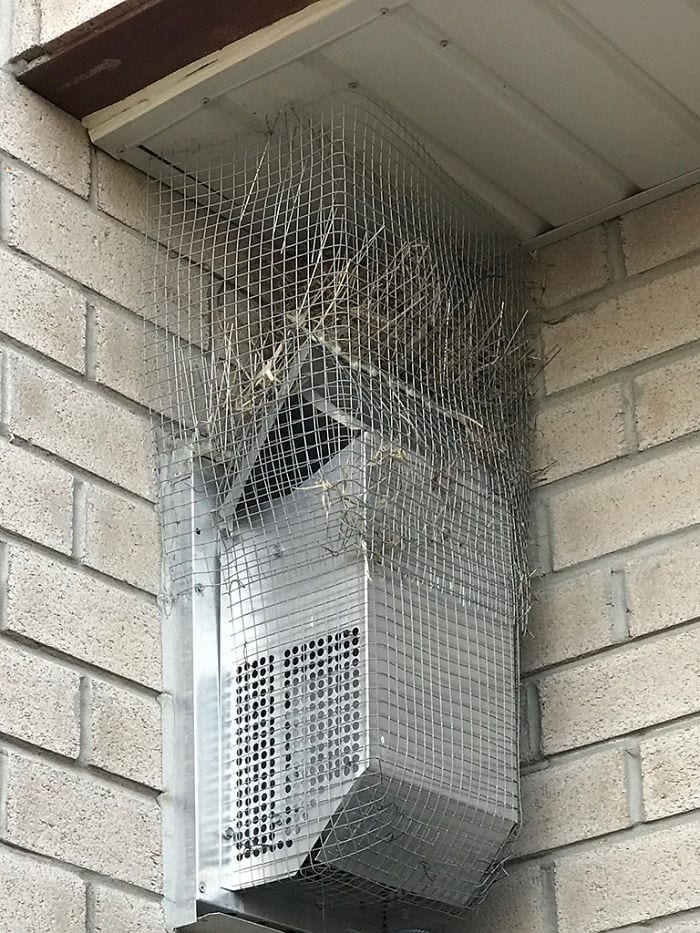 Earlier this year he invested in a slightly terrifying fake owl he named Dr. Who, and the birds have not been back since. Victory human! 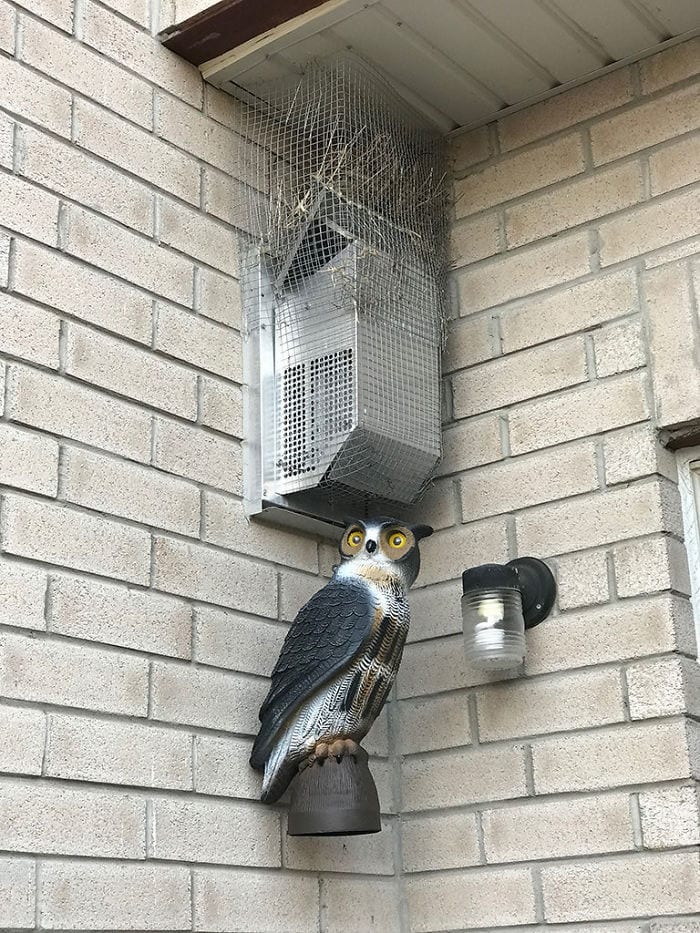 “I think this will be the final one,” he writes. “If I see them back next year, I may just give in and try to charge them rent.”

Thanks for the laugh!