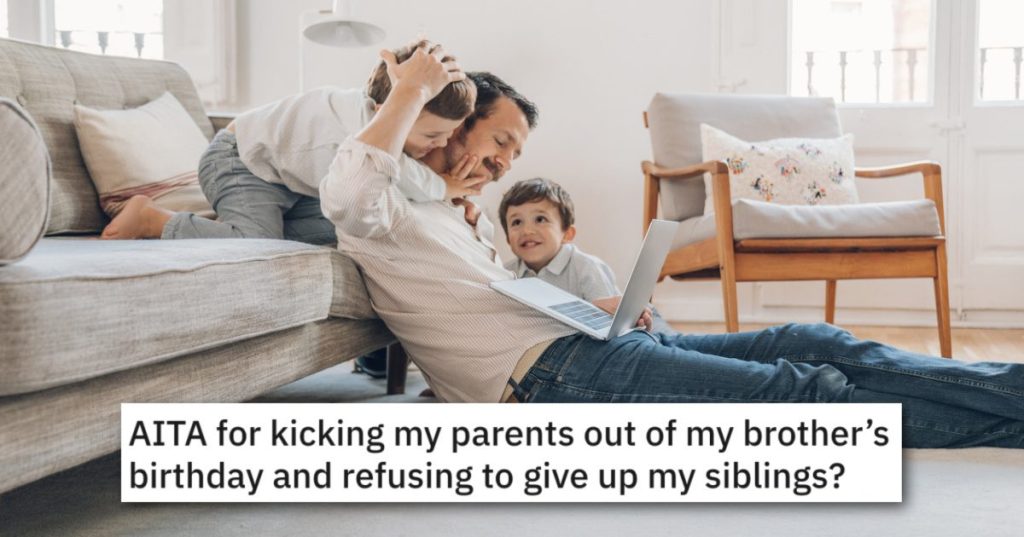 The title to this AITA feels like it could go either way, but if you’ve spent any time on this forum (or reading the news in real life) then you know there are some folks out there who gave birth but have no actual business being parents.

This OP is 25 years old, and when he was just 22, his parents got divorced. His dad ran off with his mistress (now wife) and his mom dropped his younger siblings off for a “few days” that turned into three years.

Their parents visit once a week and sometimes give OP some money.

She asked me if I can have the kids for two days or three until she settled down because she was moving to her boyfriend’s house – well it’s been three years now.

All my siblings get from them is a visit once a week, they pay a “child support” (doesn’t help that much) but I haven’t taken them to court.

Recently his oldest sibling turned 15 and OP invited their parents to the party at his house. He asked them to come alone, a request they ignored when they brought their spouses and stepchildren along, too.

He let that go, just wanting his brother to have a nice party.

Two weeks ago, my brother turned 15 I hosted the party (my parent’s help was to buy the cake and the sodas) and I invited them because after all, they are still their parents but I specified on the invitation that I didn’t want to see their spouses (because I simply don’t like them).

Any way they came with their spouses and stepchildren, I didn’t say anything because I didn’t want to make a scene after it wasn’t my birthday and if my bro was ok with, I was too.

When he asked to have a sibling picture and their parents started shoving stepkids into the frame, though, things came to a head.

Everything f*ck*d up at the family photo, I said I wanted a picture of me and my siblings together, my parents couldn’t help in making it about them.

My mom requested that her stepson should be in the picture too because he is also “family” and my dad said that his stepdaughter should be there too and also his wife because she is carrying a baby.

OP got angry, calling his parents out for all of their bad behavior and eventually asking them to leave.

His siblings agreed with his actions, but all of the “adults” in the room were upset.

I got shocked because of those random and nonsense comments so I just couldn’t keep it in and told them that they were selfish, irresponsible, narcissistic, terrible parents, and their requests were out of the question since those kids (I have nothing against them) are not our family and will never be.

I also told my dad he should have a vasectomy and not allowed to have more kids I screamed: “and if you think I’ll raise this too, you’re wrong”

Now his parents are threatening to sue for custody (even though OP was never awarded legal custody), but his siblings are all old enough to choose where they live in his state and want to remain with their brother.

My mom started crying calling me rude, my dad’s wife cried too so I kicked them out, my siblings told them to go so they both accused me of turning my siblings against them and were trying to take them by force but they refused.

Now my mom and dad said they’ll go to court to have custody back because I’m a “bad example of disrespect and irreverence” in my country the legislation allows my siblings to decide who they wanna’ live with and they say they pick me.

The family thinks he overstepped but OP thinks he was doing what was in the best interest of his siblings.

My grandma (father’s mother) said I should not have restrained my parents’ authority over my siblings and it’s not my job to take care of them and I should give them up to let my parents be responsible again.

My father’s brother said that I was TA for making my mom and a pregnant woman cry. So AITA here?

The top comment says that anyone who abandons their kids in favor of a new life doesn’t deserve a say. 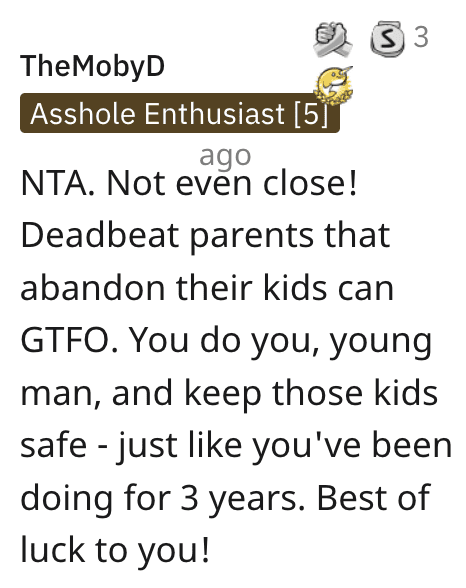 And in no way is OP the a$$hole in this situation.

They definitely don’t seem to have those kids’ best interests at heart. 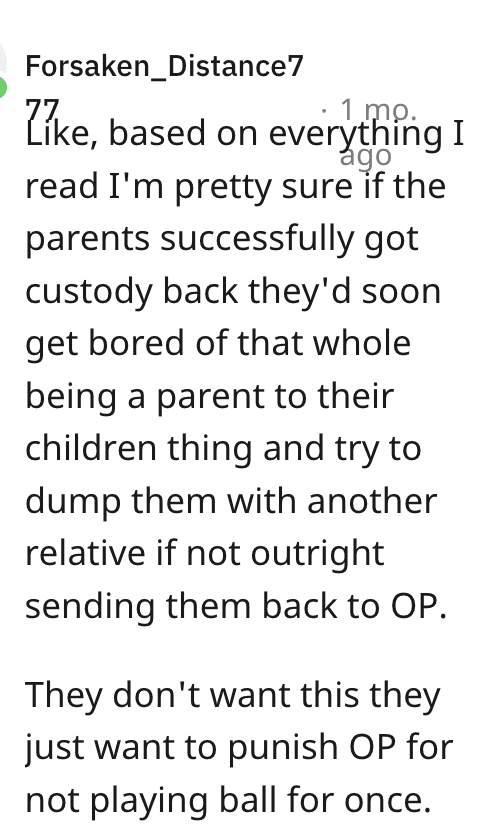 The parents are the terrible, selfish people here. 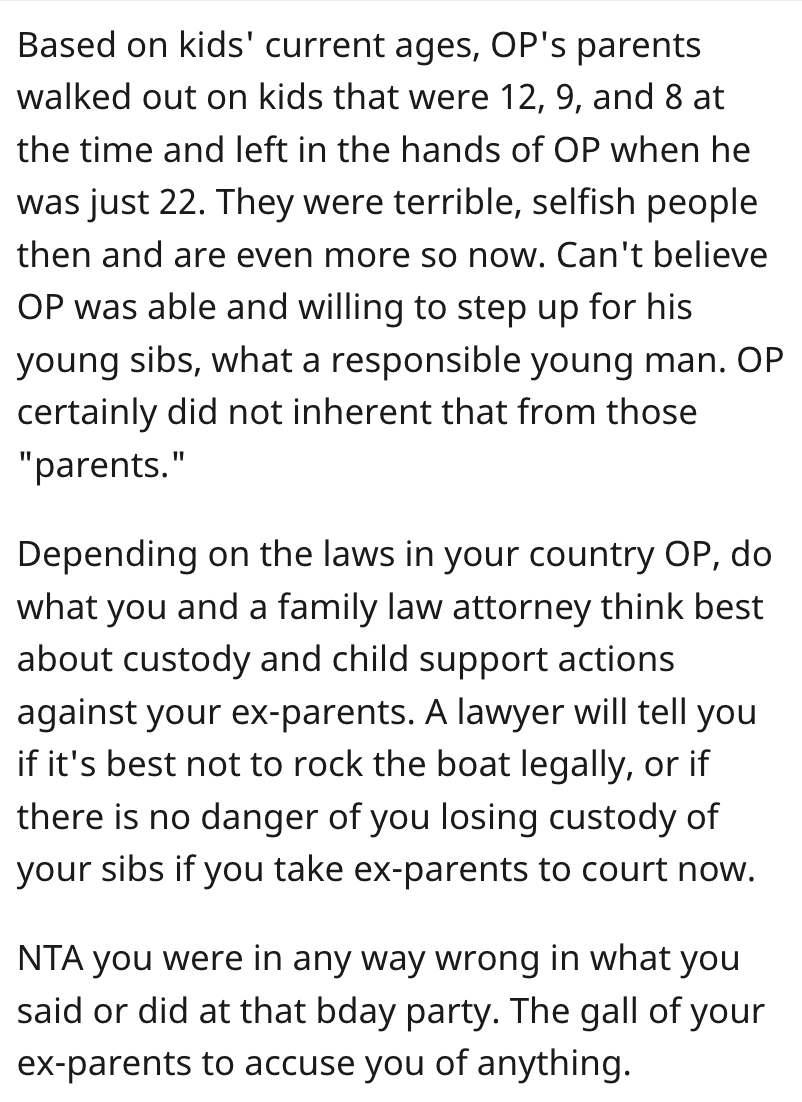 They also think OP should be suing for child support. 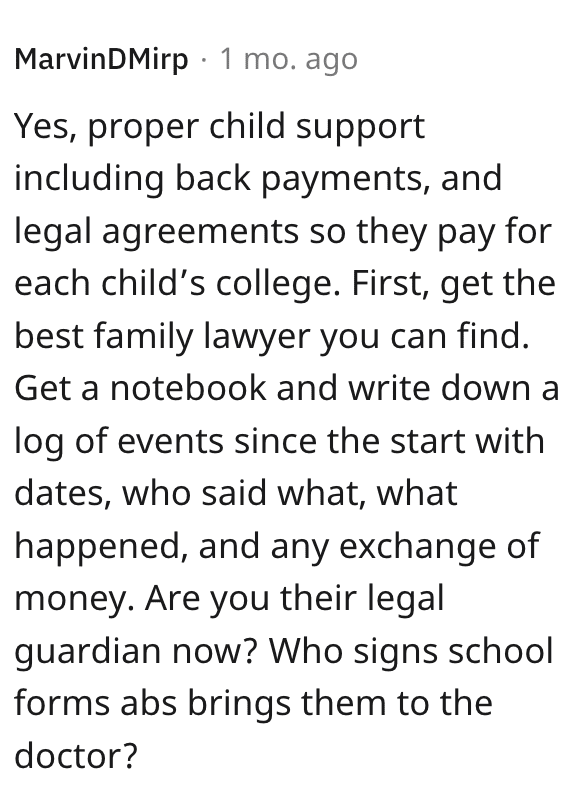 I think it’s clear who has these kids’ best interests at heart and who doesn’t, to be honest.

Even if he could have handled it better in the moment, it’s hard to blame him for being angry.

What are your thoughts on this one? Drop them in the comments!