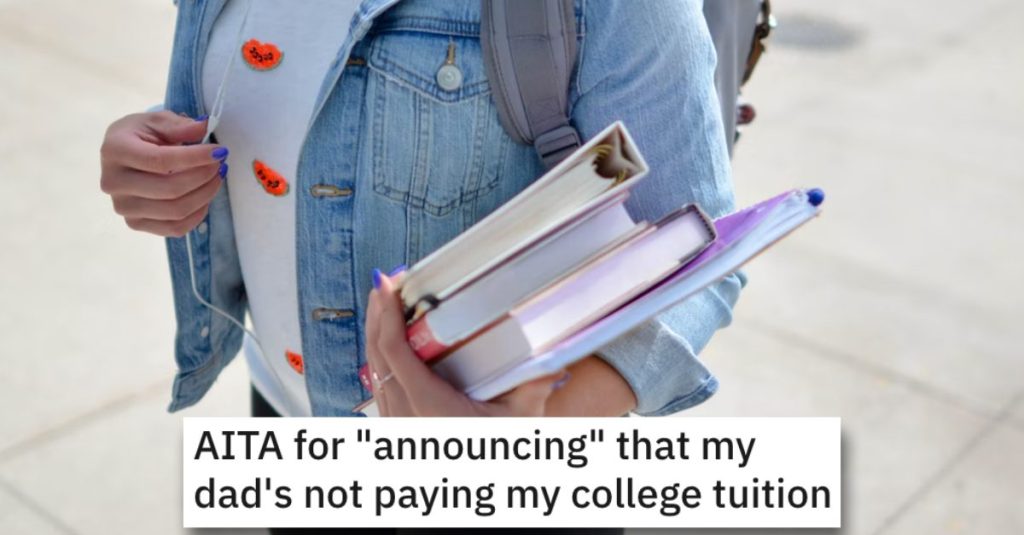 When it comes to whether or not parents are going to pay for their kids’ tuition, it can lead to some pretty hurt feelings.

And this person shared their story on Reddit’s “Am I the A**hole?” page to see if they acted like a jerk for telling the truth about who was paying their tuition.

Read on to see what happened.

AITA for “announcing” that my dad’s not paying my college tuition?

“My aunt and uncle are paying for my cousin’s college.

My dad had a college fund for me, but he had stipulations like he wanted nothing below a B for grades and to pre approve any classes I take, weekly meetings to discuss grades and a bunch of other stuff. Which would be fine if you have a normal dad. Mine isn’t.

My dad has a temper and I spent 6th-12th grade stressed out about grades and being screamed at or grounded over things that sometimes weren’t even my fault like a teacher not updating online grading and an assignment being marked “missing” because of it. And getting my back pack and locker randomly searched by him for no reason besides “to make sure I’m not hiding anything “.

I decided to pay for school myself because of 1 not being stressed over getting screamed at 2 I didn’t feel like constantly worrying that he’d disapprove of a class or a grade and decide not to pay. Which I could totally see him doing. I’d rather be in debt than controlled for 4 more years.

I just finished my first year.

Well my family got together on the 4th and… well sometimes they’re nosey. They were talking about my cousins school and my uncle looked at my dad and said “well how much is – my name- school costing you?”

I said “what are you asking him for I’m the one paying for it?”

Later on my dad was p**sed off and said that it was out of line to say that and I embarrassed him.

I didn’t do it to embarrass him, I was just being honest. He doesn’t even know how much tuition is so he was the wrong person to ask.

One reader said that this person did the right thing. 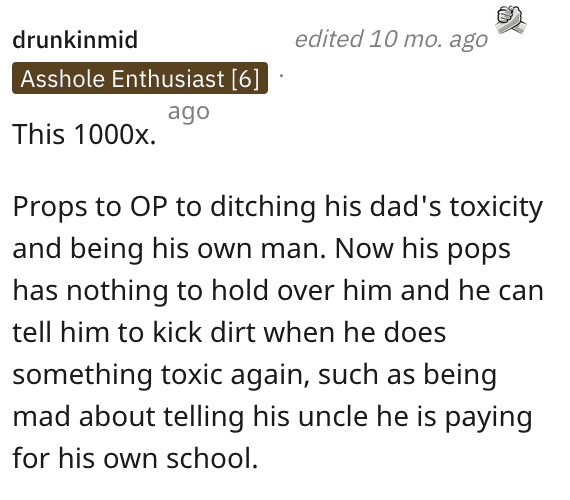 And this Reddit user said that the dad would probably keep changing the rules.

Another individual could relate to this story and said this is why they moved out of their parents’ house. 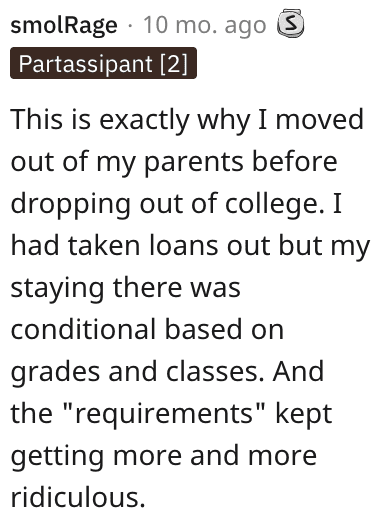