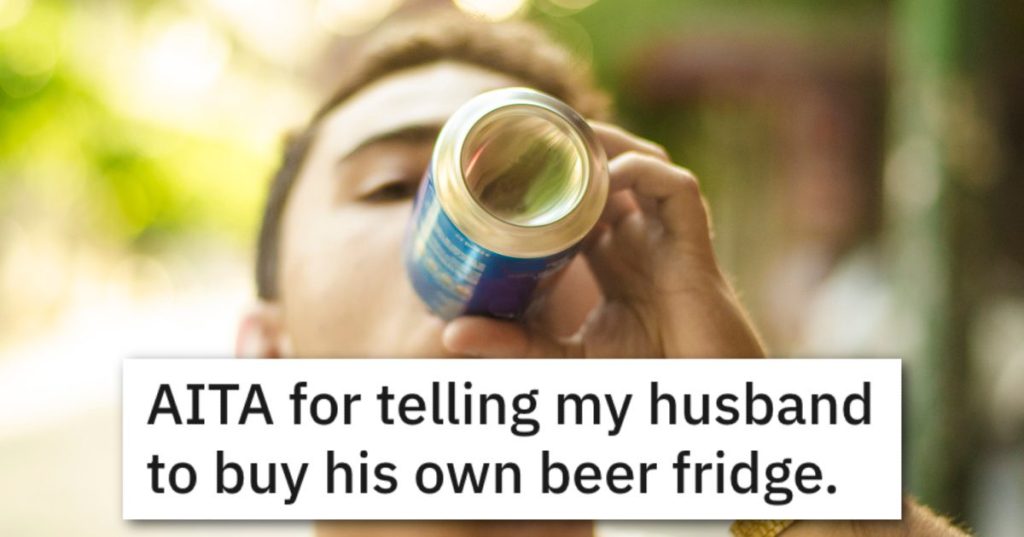 This Person Wants Their Spouse To Store Their Beer In A Separate Fridge. Is He Wrong?

There’s no doubt that co-existing in the same physical space with another human being can be tough. No matter how much you love them (or enjoy living with them) everyone has habits that are annoying to other people.

If you want to continue living with that other person, though, you have to figure out how to come up with solutions that work for everyone – but this OP is finding out that might be easier said than done.

For reasons that I assume are unfathomable to most normal folk, OP’s husband enjoys not only taking a few sips from cheap beer before starting a gaming stream, but leaving a bunch of different ones open in the fridge.

It’s not long before they begin to smell, and soon enough OP began to get upset with the stench.

My husband and I have been married for 3 years. I love this man with the entirety of my life, but a year ago, he picked up this little habit where he stocks up on cheap beers, and leaves them open in the fridge.

I was fine with it when it was just 2 or 4, you know, enough to start up his gaming stream, and get the mood ready so he can have fun with his chat, but now… there is an entire section of our fridge devoted to his skunky ass opened beers under our meat drawer.

He just puts as many as he can fit under the drawer, and it fucking STINKS. The entire fridge smells fucking frat bro puke after a day and a half of his beers being in it, and frankly I was sick of it.

Once all of the beers were gone, they removed the shelf he typically uses and rearranged in an attempt to send a message.

When he finished his last beer, I took the section off of the fridge shelf that he used to store his beers out. I cleaned and rearranged the whole fridge and I locked the shelf in my closet because I wasnt playing this game anymore.

Message received, though not the one they intended – and the spouse even felt the need to get their daddy involved on their behalf.

He finds out the shelf is missing, and while i was out he opened 2 beers, stuck them next to all our condiments, and immediately went to his dad, pissed that I was trying to “emasculate him” by “denying him his beers”. Even though the mans been buying a 24 pack a week every week, and i have never stopped him. The man knows his limits. I just am sick of smelling rancid beer every time I open our fridge.

I tell his dad that its not about the beer, its that he leaves it open until it fucking stinks up the place before drinking it, and he said “you’re gay, if he wanted to be with a controlling bitch, hed go be with a woman, stop trying to control my son.”

OP even offered to split the cost of a beer fridge with him that he could keep near his gaming station but the partner is doubling down on the fridge being neutral territory.

So swallowing all my anger, I offer to go halfsies on a drink fridge for him, like the ones you see in shops…

He looks me dead in the eyes and says.

“The fridge in the kitchen is just as much mine as it is yours, you heard my dad. Now drop it, and put my shelf back.”

Was OP wrong to remove the shelf? To ask that nothing smelly be kept in this neutral territory?

I think we can all agree that there are a few red flags flying around here, right? 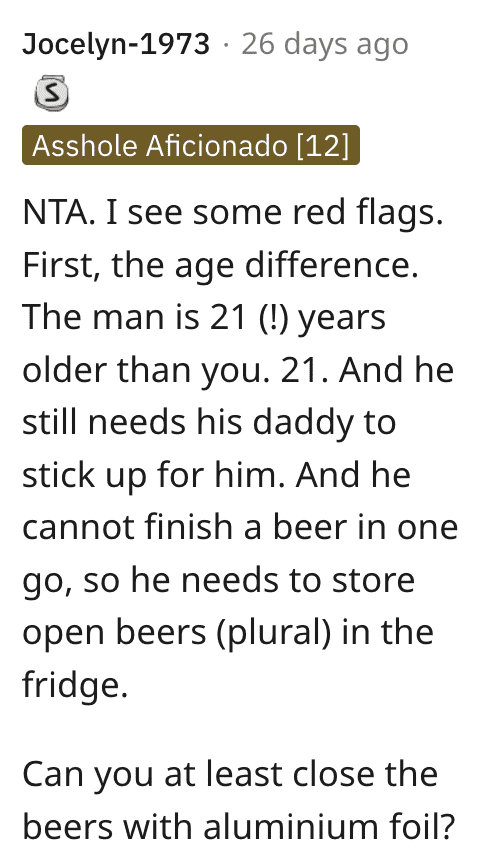 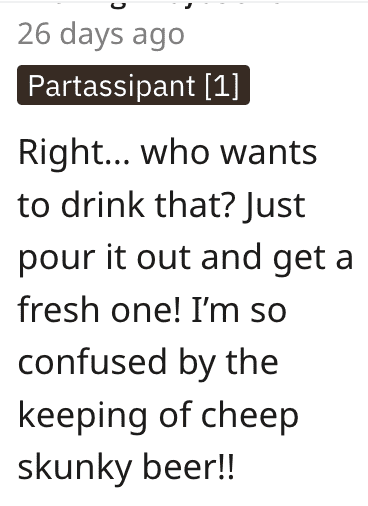 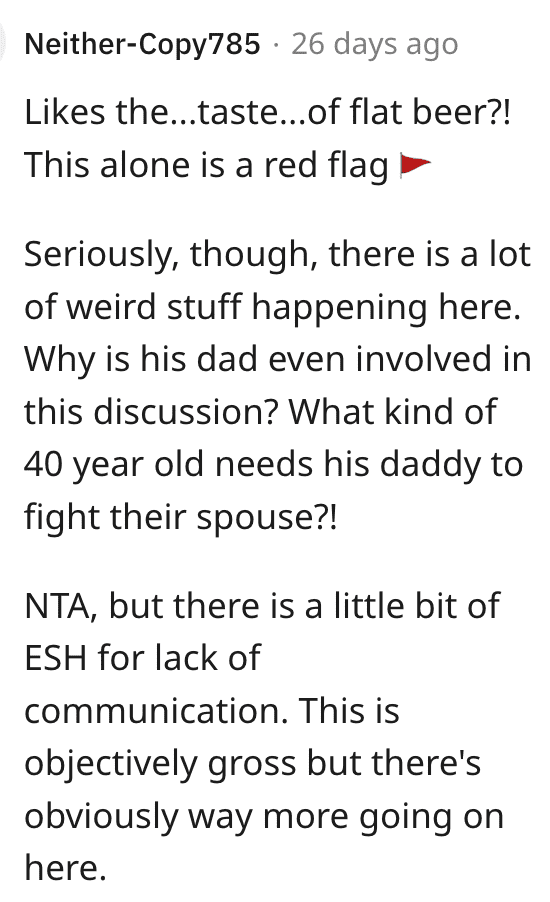 A little bit of perspective. 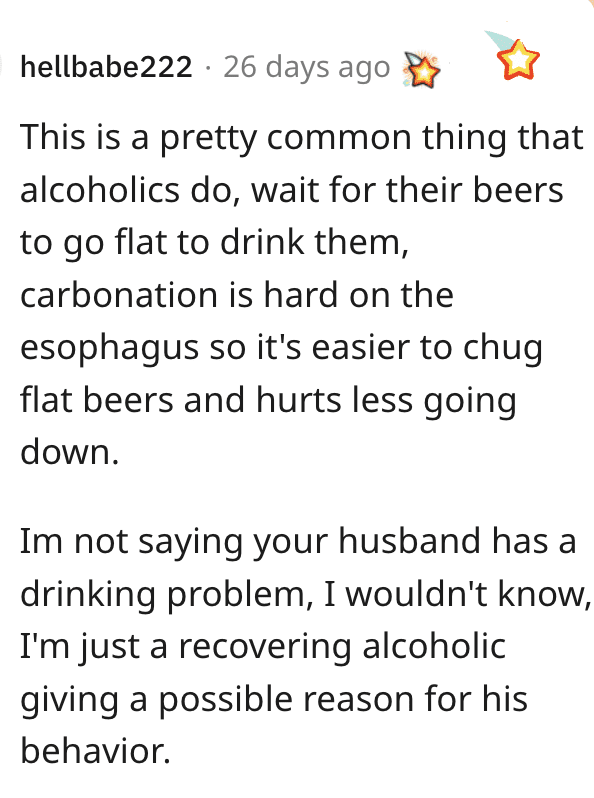 Ridiculous seems to be the nice word for it. 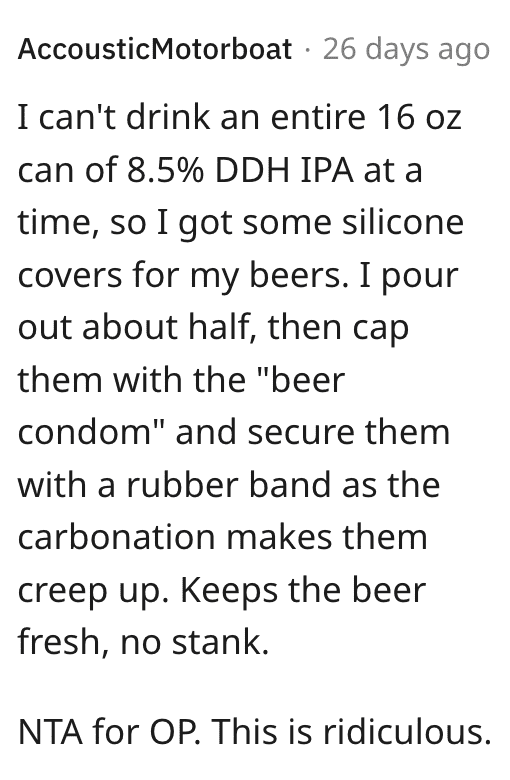 Y’all I don’t even know where to start with this one, but OP probably isn’t wrong for being upset.

What would you do if your grown spouse asked daddy to speak up for them? I can’t wait to read your replies in the comments!