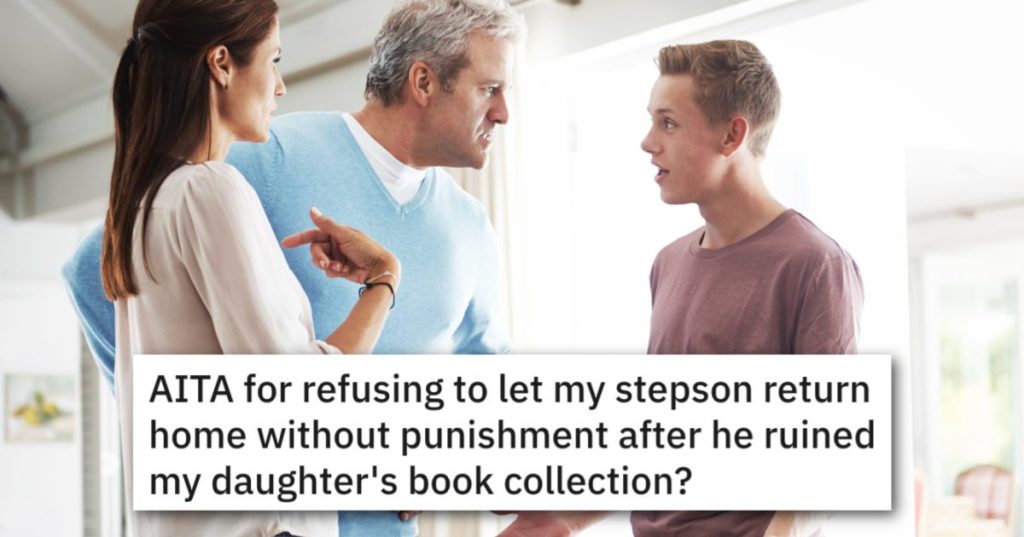 There are more than a few posts on the subreddit Am I The A$$hole that feature the struggles of blended families. It’s tough when kids and parents are trying to make things work, combine their parenting styles, and make sure everyone is respected and happy to boot.

OP is finding out that accomplishing this is doubly hard when you’re the only adult in the situation who wants to hold a kid accountable for his terrible behavior.

His daughter is an avid reader. Reading and books are an important part of her identity and she has amassed a collection that includes some hard-to-find volumes.

His stepson often acts out, destroying the property of others in the house, and instead of holding him accountable, his mother (OP’s wife) lets him run to his father’s house and hide until the storm blows over.

My biological (12yo) daughter ~ Susan likes to collect and read old children’s books. She’s become incredible reader. She had problems with reading and learning before and we were advised to encourage her to read and eversince she started reading (which she does regularly) her skills improved. she also reads to her 2yo sister everynight.

I have a (16yo), stepson ~ Levi who can be a hothead sometimes. We don’t have a son~dad relationship but I respect him and he respects me though he can act quite mean and selfish towards me and his sisters. He’d throw away stuff that belongs to us over small arguments and teases Susan for spending a lot of time to read calling her grandma.

My wife and I discussed his behavior and had conversations and agreed on punishments but Levi’d go to his dad’s place whenever he causes troubles then have his dad yell at me for wanting to discuss a suitable punishment. Then Levi comes home days later expecting me to let go of what he did every time, it’s frustrating.

Recently the stepson threw all of the daughter’s books into the swimming pool, ruining the majority of them, after she refused to let him borrow a camera.

Before OP could get home to discuss an appropriate punishment, the kid had gone to his dad’s. The dad refused to let OP see his stepson and threatened to call the authorities if he tried to punish his stepson, as he “had no right.”

I got a call at work from Susan saying Levi took her entire book collection and threw them in the pool after she refused to lend him and his friends her camera for his trip. My wife helped get them out but they were wet and some were torn. It was horrific because some of those books are hard to get and meant a lot to Susan as a part of her life. I was so mad at Levi I came home to have a conversation with my wife to decide on a punishment but he already packed a small bag and went to his dad’s, I asked my wife how could she let him basically run after doing this and she said he called his dad and he came to pick him up after Susan said that I was coming home to deal with the problem.

I went to his dad’s house and he refused to let me see him. I told him how Levi was hiding from consequences and his dad tried to justify why Levi was acting out by blaming me for how me and Susan treat him. He even said he’d get CPS involved if I ever try to punish him because I’m not his dad, I have no right. Adding what Levi did was a reaction to my daughter being mean to him. He told me to leave because Levi won’t come home til I promise not to do anything about what he did and put it in writing.

OP said perhaps the kid should stay there, then, until he’s ready to apologize and accept his punishment.

His wife thinks (and her parents agree) they should just let it go with an apology, but OP feels as if this will just encourage the behavior to continue.

I told him Levi should stay there with him then. He’s not to come back til ~he~ get proper punishment. His dad argued it’s his mom’s house too and called my wife and she asked to let this go and we’ll figure out some way to resolve it but I don’t think it’s fair for Susan to have her books ruined and Levi getting away with it.

They’re asking me to let it go but this will only encourage Levi to do worse if I don’t deal with it now.

It’s been 2 weeks and my in-laws say I was out of line for banning Levi from coming home and are telling me to step back but I refused.

EDIT ~ Levi’s dad thinks that because I’m not his bio dad then I have no right to punish him for whatever he does in the house. In the past his dad caused issues when I used to take Levi’s electronics (that his dad bought) as punishment. Then I got talked out of punishing him every time he did something unacceptable whether to me or his sisters.

I’ve arranged for family therapy but Levi’s dad refused to let him go.

EDIT ~ I’d like to mention that my inlaws said that Levi is willing to apologize to Susan and so this should be enough to get this over with but I kept saying no and for that I’m being considered at fault.

He’s asking Reddit for advice, which is something you know they’ve always got in spades!

The top commenter might sound radical, but the truth is, these kinds of parenting disagreements can be fatal for relationships. 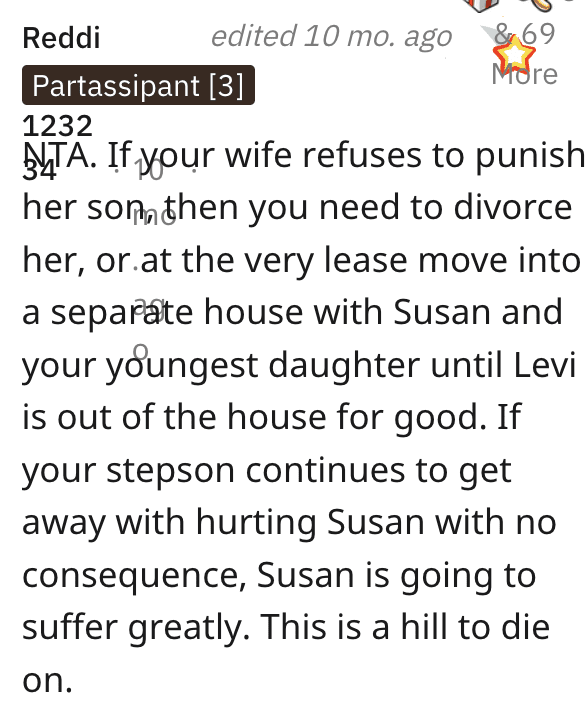 Not only does the stepfather seem to be the only one with the 12yo’s best interests at heart, but who honestly cares about his stepson’s upbringing as well. 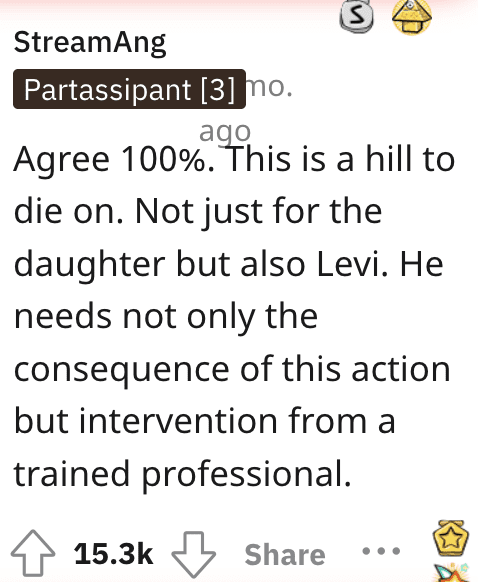 Some people think they should force the stepson to replace her things, even against his will, but that the daughter should be left out of it. 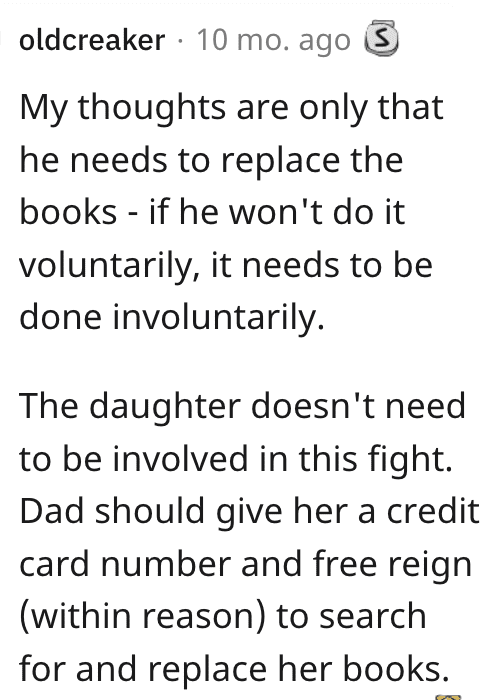 Others disagree that this is the way to teach respect (though they do agree the daughter’s things need to be replaced one way or another). 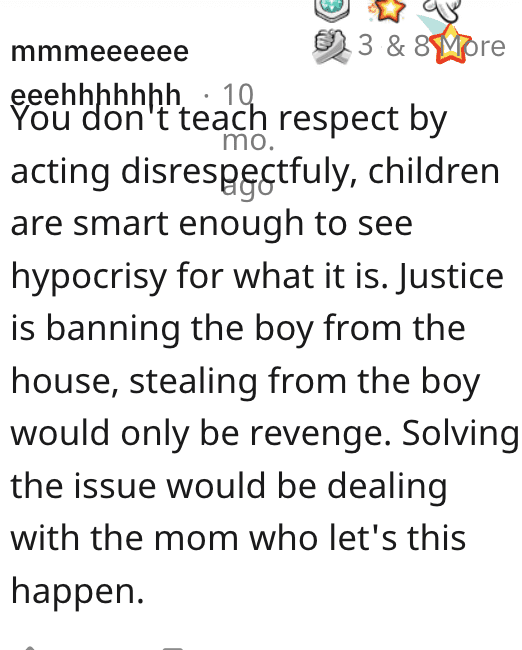 Plenty of people agree that the wife/mother is the root of the issue here. 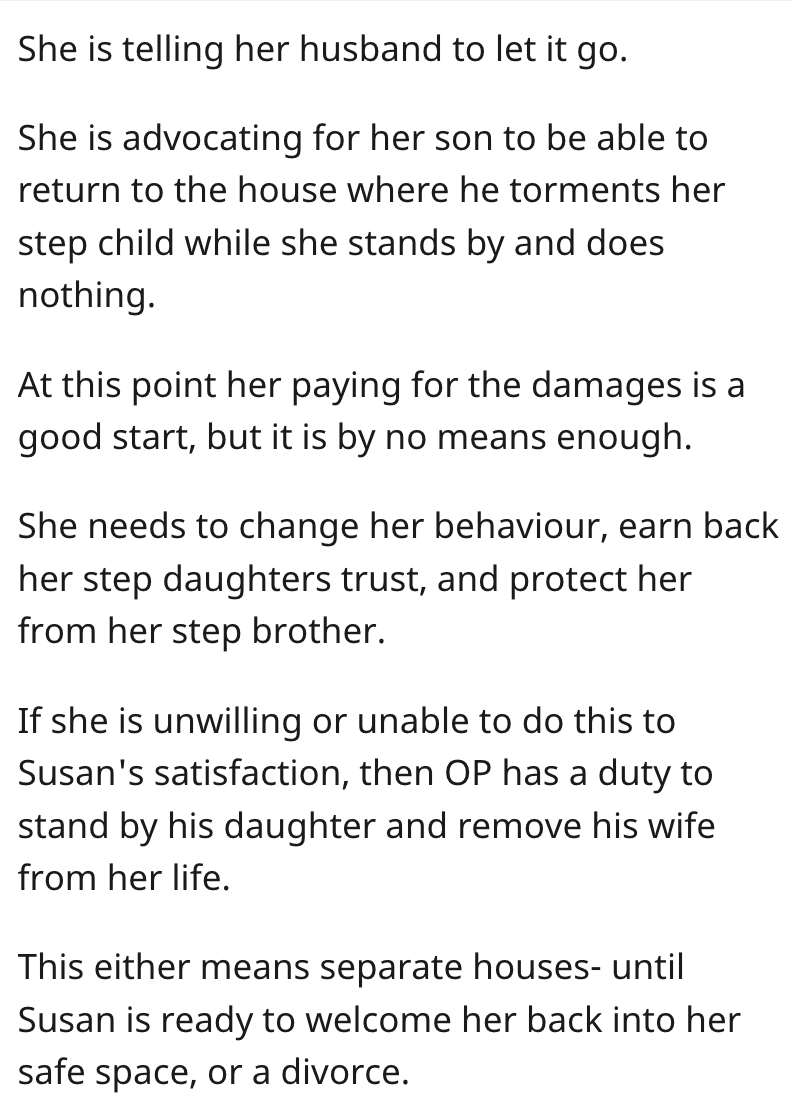 Y’all I would have been CRUSHED if this had happened to me as a kid, and if my parents had refused to punish the sibling responsible? It would have ruined my trust in them for life.

What would you do if you were OP? Are drastic measures in order? Tell us why or why not in the comments!