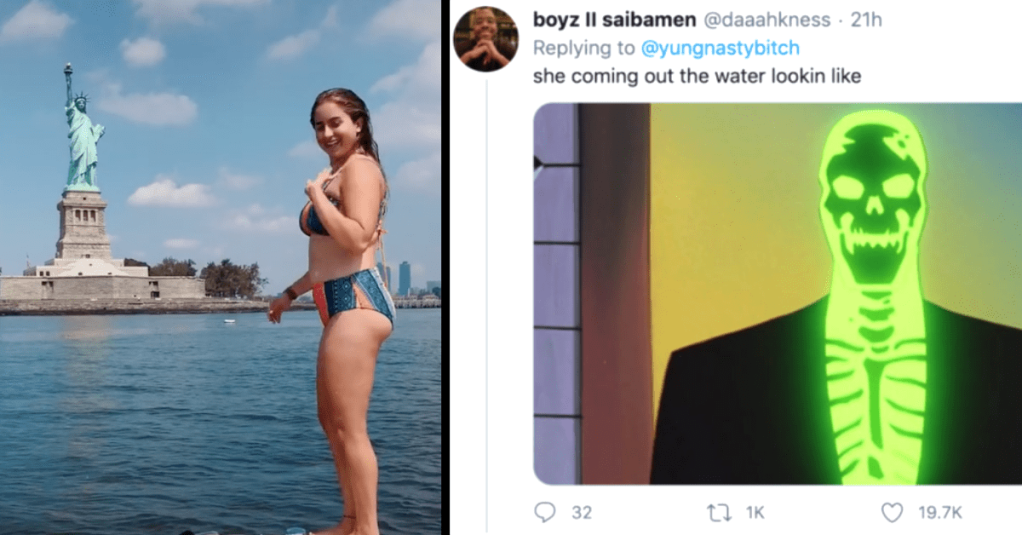 Looks like New York and New Jersey continue to have a bad reputation. When Donna Paysepar posted a TikTok of her swimming in the Hudson River, the rest of the internet was shook.

Though Paysepar looks comfy enough taking a dive, other denizens of the web quickly expressed their shock and disgust.

After all, it’s just a girl taking a dip next to Lady Liberty on a bright and sunny day.

However, to those who aren’t necessarily native to the NYC metropolitan area, Paysepar might as well have been jumping headfirst into nuclear waste.

True to form, the internet was at the ready with pollution jokes.

Others opted for the classic mutant joke.

According to Paysepar’s reaction video, the TikToker was apparently unaware of the Hudson’s seedy past. Excessive waste and pollution during the 1960’s earned the body of water a pretty bad reputation.

According to the New York Department of Environment Conservation, nearly 150 million gallons of raw sewage used to enter the Hudson very day. Since the Clean Water Act passed in 1972, several efforts have been made to clean up the active waterway.

Now, there are sections of the Hudson that are totally safe for swimming.

For folks who’ve never been near the Hudson River, it’s understandable how Paysepar’s dive might’ve been startling. However, environmentalists have spruced up the river into much better shape for quite some time now.

Still, all that history of pollution is pretty hard to shake off.

Be honest – would you swim in the Hudson River? Let us know in the comments below!