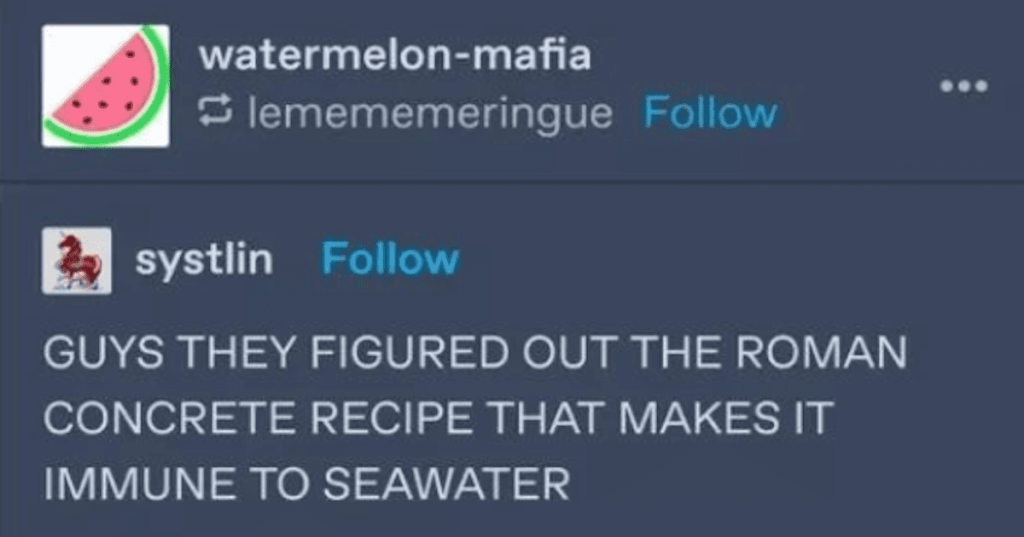 This Tumblr Thread Proved That Time Really Is Our Biggest Enemy

They say time heals all wounds, but it’s also our rarest commodity.

So much has happened over the course of our entire history that there’s bound to be some knowledge that falls through the cracks.

As it turns out, that missing information sometimes turns out to be way more crucial than initially thought.

These Tumblr users explained how and why it took so long for us to crack the Roman Empire’s recipe for seawater-proof concrete.

Man, this information sure could’ve come in handy throughout, like, most of the 19th and 20th-century.

The sad thing is, this isn’t the first obvious solution from the past that people have overlooked.

Check out these other totally ignored explanations from past civilizations.

Seriously, how did archaeologists overlook these things?

Even when ancient communities wrote this stuff down, we still overlooked so many of their helpful discoveries.

Too bad for institutional biases.

So many solutions were just totally ignored.

I swear, we would all try to reinvent the wheel, if we could.

It’s wild how an entire civilization’s obvious, everyday formulas quickly turn into ancient secrets to the rest of us.

Well, this user brings up a pretty fair point.

We take tons of shorthand for granted.

Imagine someone scrambling snake eggs instead of chicken eggs for breakfast.

Honestly, I didn’t even think about how “milk” could be totally misinterpreted. With all that in mind, it makes a lot more sense how the Romans’s concrete recipe might appear a little more vague at first glance.

Well, that was an absolute trip. Who knows what other pieces of wisdom will be lost to time? After reading that thread, I’m convinced there are more ancient secrets out there. Let’s just hope that the ones we still haven’t uncovered aren’t too drastic.

So, what are some of your favorite secrets from ancient history? Share them with us in the comments below!