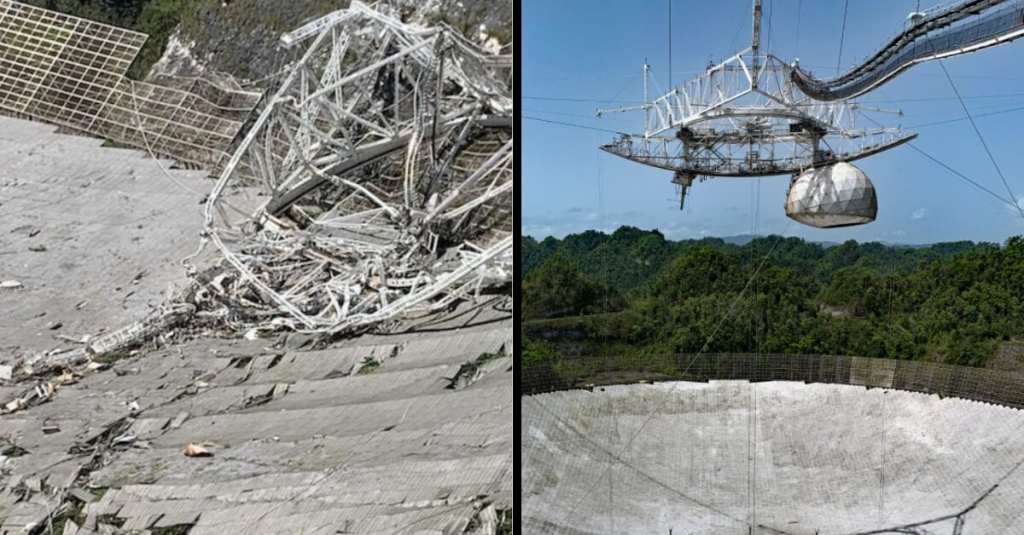 This Video Captured the Exact Moment of the Arecibo Telescope Collapse

Space is expensive. Oftentimes, those expenses, for one reason or another, turn into a whole lot of money down the drain.

That’s exactly what happened at the Arecibo Observatory in Puerto Rico. The groundbreaking dish-like telescope unfortunately collapsed when a 900-ton platform hanging over the observatory detached and fell to the ground.

The structure is a whopping 1,000 feet wide, so the area of destruction spanned across the 118 acre property.

The collapse of Arecibo marks the end of an era. For nearly 60 years, the telescope gazed into space and made countless breakthrough discoveries.

Arecibo was the first to spot exoplanets (planets lurking outside our solar system), detected the first organic molecules 250 million light-years away in a far-off galaxy, and found at least 100 near-Earth asteroids that posed a threat to our little blue planet.

Arecibo was also critical in searching the skies for extra-terrestrial life. Though scientists hadn’t heard any word back during their search for alien intelligence, the telescope is still a hallmark of our desire to learn more about the universe around us.

However, the observatory had been in a pretty precarious situation far before its collapse. Natural events, like erosion, hurricanes, tropical storms, and the like, gradually eroded the structural integrity of boomer-era telescope.

A mere 12 days before the tragic event, the National Science Foundation released its plans to officially decommission the telescope. Unfortunately, that announcement came far too late for engineers to safely take apart the dilapidated structure.

The instrument platform of the 305m telescope at Arecibo Observatory in Puerto Rico fell overnight. No injuries were reported. NSF is working with stakeholders to assess the situation. Our top priority is maintaining safety. NSF will release more details when they are confirmed. pic.twitter.com/Xjbb9hPUgD

The tragedy of Arecibo rings out a death knell for generations of structures facilitating space exploration. Another landmark instrument of space discovery, the Hubble Space Telescope, is set to finally decay sometime between 2030 and 2040. Just last year, NASA executives confirmed that even the International Space Station would have to be decommissioned. This all just goes to show that nothing lasts forever, not even scientific structures.

What’s your reaction to the Arecibo telescope collapse? Share your thoughts with us in the comments.