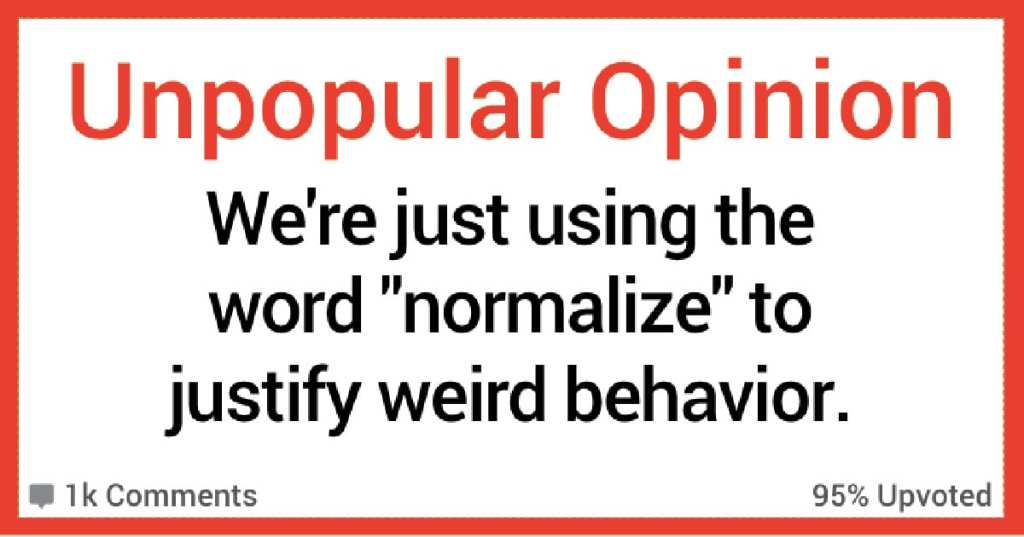 Unpopular Opinion: The Word “Normalize” Is Just An Excuse To Accept Weird Preferences

Okay, listen. Normally I’m all about the Unpopular Opinion reddit, and that’s because I am middle aged and crotchety and all, get off my lawn and stuff.

That said, so many things about this question got my dander up – the fact that there’s no universal definition of “weird,” for one thing, but for another, who cares if we want to “normalize” the idea that everyone can do and believe what they’d like (as long as they’re not hurting anyone)?

The word "normalize" is being overused to justify weird preferences. from unpopularopinion

Isn’t that a good thing?

These 15 people weighed in, so let’s find out if they agreed with me, or with the original poster, hmm?

You have become the very thing you swore to destroy

I fully agree. Don’t tell me what to think is normal.

Just be you, don’t be afraid to be weird.

Instead of normalize, we should just say ‘respect’, not everybody’s furry, but still respect those people who are.

Respect would be better. People need to stop using the wrong words and then getting mad when people misunderstand their message.

Normalize being weird! Then nothing will be weird! A paradox!

I understand that the last line of my post does make it seem like it but it’s not really about furries, it’s more about these kinds of things, here’s a sampling I just pulled off twitter from the last day:

lets normalize not calling women crazy when they react to disrespect

Normalize not working when you’re overwhelmed, drained and having a mental health crisis.

“Tolerance and acceptance” are good things and I agree to them, the problem is a lot of groups have been pushing past that.

As the saying goes “your right to swing your fist ends where my nose begins.”

I’ll accept you as you and that as a consenting adult you should be able to do whatever you like with other consenting adults, but this push in the past few years of “celebrate and agree with me you bigots” is getting pretty tiresome.

Tolerate is the word you’re looking for.

Some things are really weird but not wrong.. They should just be done behind closed doors and from the privacy of your own home. I have some friends who are into some pretty freaking weird stuff and they have the decency to do this…

Like i said it’s not wrong, they just understand that “normal” people would rather not see it and so they show them that courtesy. Idk why now a days people are trying to push their kinks/fetishes or weird behaviors into the mainstream…

It doesn’t belong there.

Whatever happened to wanting your “weird” thing to remain “weird” so you’re more of an individual?

Nonconforming just for the sake of being a nonconformist is a form of conformity. The older you get, the more you realize that no one is quirky, they’re just annoying.

6. We should normalize not killing people, though?

Ugh it’s incredibly annoying! For example, I have deathly food allergies making me like 2% of the population.

I’m not trying to normalize my condition and make those bend around me, I just eat more carefully at restaurants. And my issue can literally kill me.

I understand people want to remove a stigma and for that, we need to do something. But instead of “normalizing” I’d rather push for “acceptance”. I can’t change that most people don’t have mortal food allergies, but I can let them know and ask for respect.

5. But they don’t mean the same thing to everyone.

It reminds me of people saying “when everything is a priority, nothing is.”

The words “normal” and “abnormal” mean something to a culture. It’s okay to have behaviors and preferences that are shared across the majority of your culture, and consider that normal. We don’t need to “normalize” every individual abnormal interest and proclivity that each person has. If it’s not hurting people, we can strive to not persecute it, but to normalize every fringe idea and behavior just dilutes the meaning of any sort of shared culture.

Isn’t that statement a contradiction? If they’re nonconforming as stated with the first word, how are the also conforming at the same time?

I think it means people who make “nonconforming” an identity, rather than just naturally nonconforming. I knew a group of people at university who were like that in terms of being hypercritical of mainstream fashion and media, but they all wore the same kind of carefully curated unfashionable clothes and consumed the same books and films as legions of “nonconformists” before them.

They were conforming to a very cliched concept of non-conforming, if you get me.

I’m not a conservative or a republican or whatever (not that there’s anything wrong with that), but I’ve noticed this obsession on the left with “normal”, which is really strange for a group of people who claim to celebrate individuality and embracing your abnormalities (which I love).

There was an article that spotlit a supposedly “racist” document that was teaching doctors in how to respectfully navigate and understand the way physical pain is experienced in all different cultures. I found it interesting, and I don’t think it was intended as racist at all, oh, but of course, the over-sensitive brigade with far too much zeal and no sufficient cause to channel it came swooping in and tearing this “racist, patriarchal, nazi” document to shreds.

They found it abhorrent that the American healthcare system treated a western, Caucasian way of experiencing pain as the “norm”. Someone in the comments said something to the effect of “Well… it is this norm. Currently, the the statistical majority of Americans are Caucasians, technically making it the norm and therefore the most common.”. Someone responded with how vile and racist that statement is, to which they then responded with a screenshot of the definition of normal, stating something along the lines of “usual, common, typical”. It received response from the same offended person, inflamed, saying “Keep abiding by your fucking disgusting racist beliefs, idiot.” and it received many upvotes! What has the world come to where a word definition and fact has become some racialized attack?!

This finicky attempt to “normalize” everything seems to be indicative of neuroticism.

There are people that hitch rides on freight trains and do MDMA in abandoned factories. There are people that don’t read literature and watch reality TV with their cats. Claiming that these types of people are just as interesting is the same as being a “fat is beautiful” activist.

1. I think this would get unanimous approval.

I’m glad this opinion is unpopular, tbh. I hope it stays that way.

What would your response to this question have been on Reddit? Share it with us in the comments!