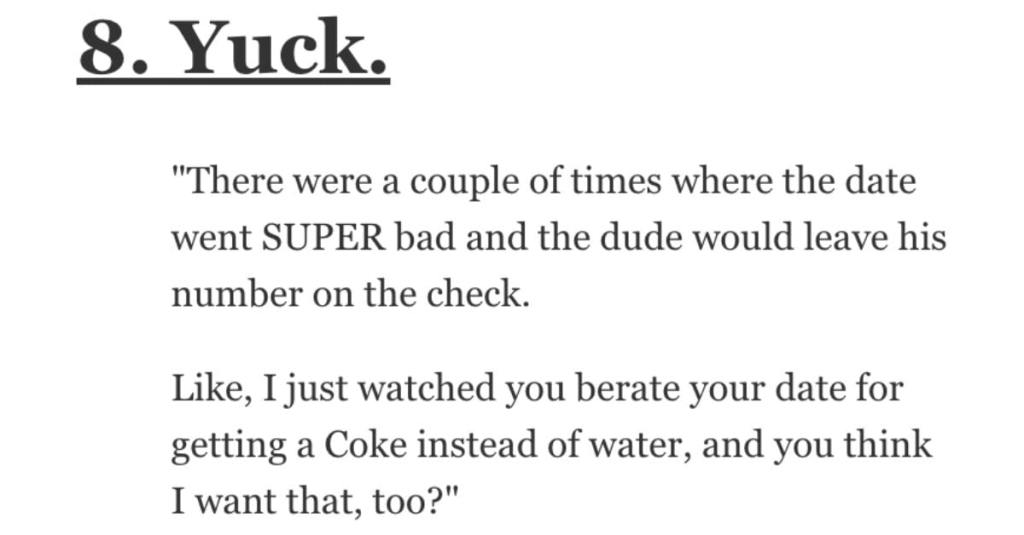 Oh, this is gonna be fun!

I love hearing stories about dating misery…when they don’t involve me, of course.

The fact is that service industry folks get to witness all kinds of dating awkwardness and you just know that they’re filling in their co-workers in between bringing these poor people their food and drinks.

So are you ready to hear some cringeworthy stories?

Here’s what AskReddit users had to say about the worst dates they’ve ever witnessed.

“Husband was very controlling and the only one who ordered.

Wife did not touch her food or take a single sip of her water, left the restaurant and waited in the car for the last 20 mins of the meal.

Straight up the most sad/awkward dinner I have ever waited on.”

“I work at the quick service side of a restaurant.

A woman came in with her teenage daughter and ordered a beer. Her daughter was upset, asking her to please not drink. At first I thought she didn’t want to have to be the one to drive home.

But the mom was determined to drink that beer because she explained, “My soon-to-be ex-husband is standing right outside. And he doesn’t know it yet.”

I felt so bad for the daughter but it was just an awkward situation.”

“I was hostessing, and a reservation popped up for a blind date. They each had a drink at the bar before sitting down, and I took he lady’s coat down to our coat room.

They seemed to be getting on alright at the table, but then when the man gets up to go to the bathroom, the lady rushes over and asks for her coat.

She says hurriedly that the man was saying inappropriate and uncomfortable things and she wanted to leave without him knowing.

She hid around the corner in the vestibule while I brought her her coat, and she left.”

“Former waiter, a guy broke up with his girlfriend…before I brought them their drinks.

Everything was fine when I took the drink order, came back and she was crying. Asked if I should come back later and the guy said no it’s fine, and ordered a steak. The girl didn’t order anything.

They stayed for another 45 minutes not talking while he ate his dinner and she sat there sobbing. It was hands down the most awkward table I’ve ever waited and what a jerk that guy was too.”

“Nothing tops the time this couple came in.

The girl was a regular, so we knew each other. The guy was some random guy she met online for a date or something. Anyways the meal is fine they order a boat load of sushi, sake, and all that stuff. The tab comes and it’s like 180 bucks I think, which is fine for her. SHE puts cash in the book, and starts to get her coat.

I had already seen that she had left me around a 30% tip. He hangs back to “go to the restroom”. After she leaves he comes out of the restroom, opens the book, takes the money out and leaves.

I walk out right behind him, and tell him I saw him. He starts hassling me and pushing me. She gets out of the car and says, ” WHAT THE F**K IS GOING ON”. I tell her.

She literally FLIPS and starts beating him with her purse and hands and all that. Gives me my money plus like 50%. Leaves the guy in the parking lot. Good times.”

“A guy snuck me his credit card to pay and it got declined all three times I ran it so I had at take it back at which point the girl had to pay.

I think they were friends and he was trying to make it a date but it just didn’t work out that night.”

“This happened to me a few times, but my favorite story is about this really great guy whom I’d seen bumbling through dates more than once. He seemed nice and I’d spoke with him briefly either after a date or even when he asked for his check.

He wasn’t bad looking and he never said or did anything that made me think he was a goon or a creep. But he always had dates with a woman and then a few weeks later it was a different women. I asked him once how he got so many dates and he spilled his secret.

Being set up by friends and family. He was in his 30s and had never had a girlfriend. He sheepishly admitted that he just wasn’t interested in that when he was growing up once he was interested, he was so awkward that it never clicked.”

“There were a couple of times where the date went SUPER bad and the dude would leave his number on the check.

Like, I just watched you berate your date for getting a Coke instead of water, and you think I want that, too?”

“I had a seasonal waiting job for a small restaurant.

I got to the table I was servicing and the man asked for a water as he was waiting for his date to arrive. I had a feeling she wouldn’t, but when I came back with his water, he was accompanied by a beautiful young woman.

I gave him the water, and he they then ordered a pair of drinks together. Later on when I brought out the food, the man was proposing to the girl and she confessed that she was cheating on him. She left moments later, my heart shattered for that man.

He said he’d like to get the check, I asked him if he needed anything else. He took me by the forearm and said, “when you find the woman you love, don’t hesitate or she may find someone else.”

He wiped away his tears and left the restaurant.”

“Once I waited on a couple on their first date, the guy had ordered a bottle of champagne and a glass of orange juice.

I guess he was trying to be smooth and make a bottle of Mimosa? It created a champagne volcano that shot a good 2 feet into the air for a solid 10 seconds after he poured the OJ into the bottle.

It went everywhere, the whole restaurant watched in awe, the guy was mortified and his date was not amused.

It was a disaster.”

“Dude came in every week with a different snow bunny.

First two times waiting on him: zero tip for excellent service. Third time he got greeted with, “Heyyy, it’s so good to see you guys again. Now, [toward the man] you’ll be having a tall High Life annnnd [toward the woman] a (random mixed drink), right?”

They didn’t make it past the appetizer before requesting the check, which I took my sweet time delivering.

“Sat two at the table, clearly on a date. Give them some time before I check back — Me: Have you guys decided on food? Her: I dunno, everything looks gross! Me: … Him: Just give us a couple more minutes

A few minutes pass, I return. He orders a burger or a sandwich, she orders a chicken Caesar. Some time passes and I decide to stop back and let them know their food should be up soon when I notice that the girl is not at the table. The guy stops me – “Can I get that to go?”

I tell him I can box up the whole order.

So I watch him eat his meal alone in silence, pay quickly, and leave with her salad in a box.”

What’s the absolute worst date that you’ve ever witnessed in your life?

Tell us all about it in the comments! Thanks!