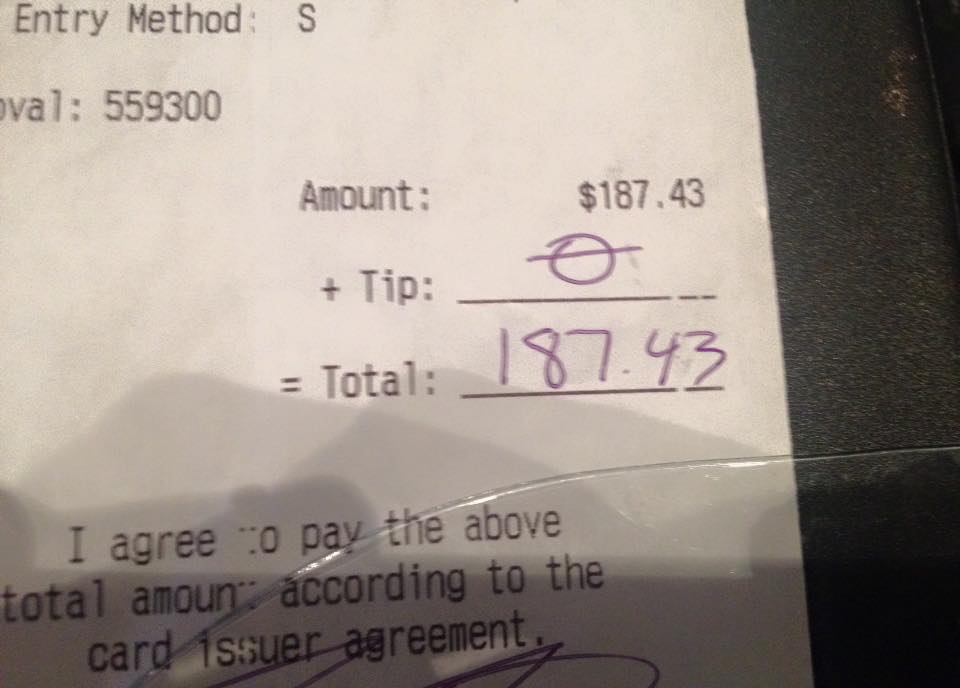 I waited tables for a long time – through high school, college, summers, and a few months here and there after my divorce in my twenties – and let me tell you, nothing surprises me anymore when it comes to tips. That being said, there is nothing more frustrating than working your butt off for a group that’s spending lots of money, adding that 15 or 20% up in your head, only to find they’re a bunch of cheapskates who’ve ruined your night.

That’s what happened to this waitress, who received a $0 tip on a $187 bill. But thanks to Facebook and social media, she’s the one getting the last word.

Taylar Cordova works at a P.F. Changs, and she lost her mind after working her butt off for – it turned out – nothing. 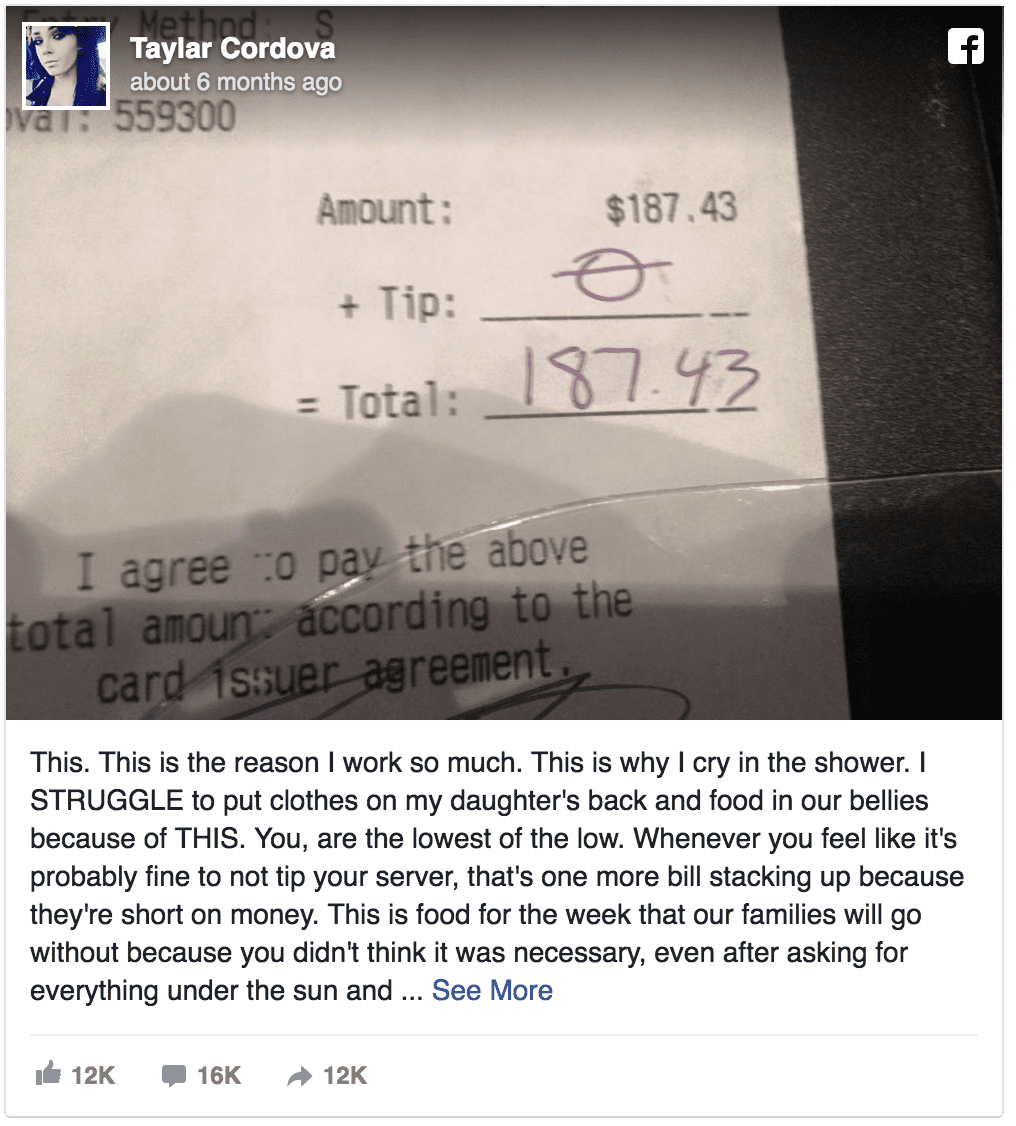 “This. This is the reason I work so much.This is why I cry in the shower. I STRUGGLE to put clothes on my daughter’s back and food in our bellies because of THIS. You, are the lowest of the low. Whenever you feel like it’s probably find not to tip your server that’s one more bill stacking up because they’re short on money. This is food for the week that our families will go without because you didn’t think it was necessary, even after asking for everything under the sun and receiving it free of charge, mind you. This is one less basic necessity my daughter needs because even TWO more dollars is too much for you. Every decision has a consequence. Servers are paid a base pay of $2-5/hr depending on the employer, so next time you don’t want to tip, regardless of the situation prior to receiving your bill, think about how much you would have to work that week off $2-5/hr to feed your family, not just you. Could you pay your bills based on that alone? Could you feed your family AND yourself? Because that’s what happens when you choose not to tip. Please, please tip your servers. Even if it was the worst service you’ve ever received. A 10% tip is a big enough slap in the face, this completely tore me apart. Don’t even bother walking into a restaurant if you can’t afford to tip. There’s a McDonalds down the street if you’re that cheap.”

Her post was shared over 5000 times, earning mixed reactions that ranged from sympathetic: 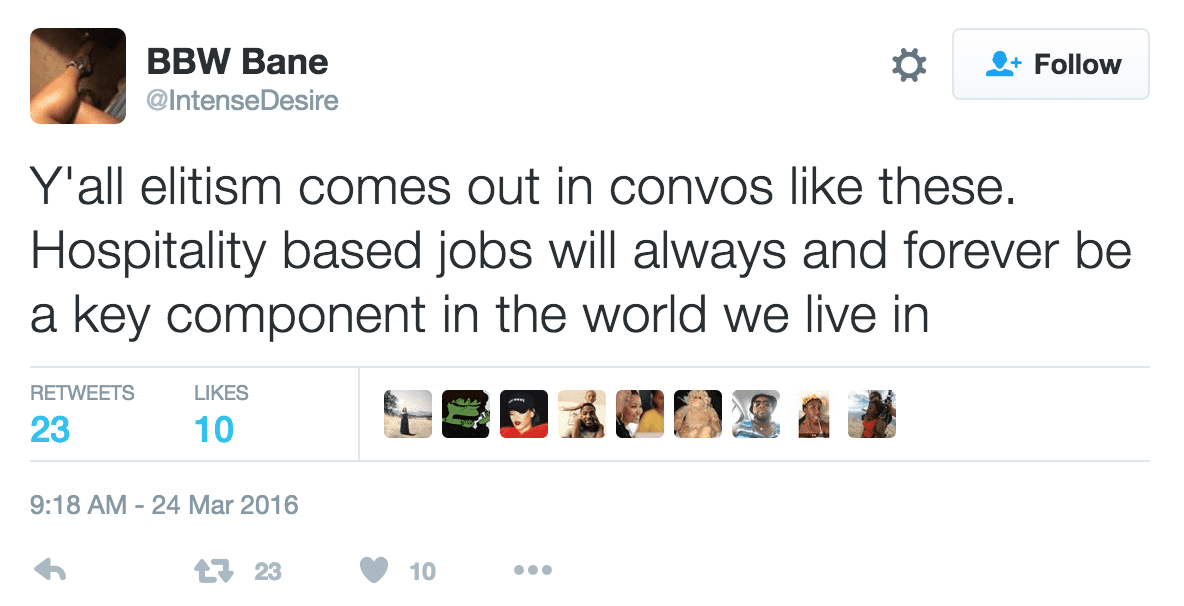 To elitist and awful: 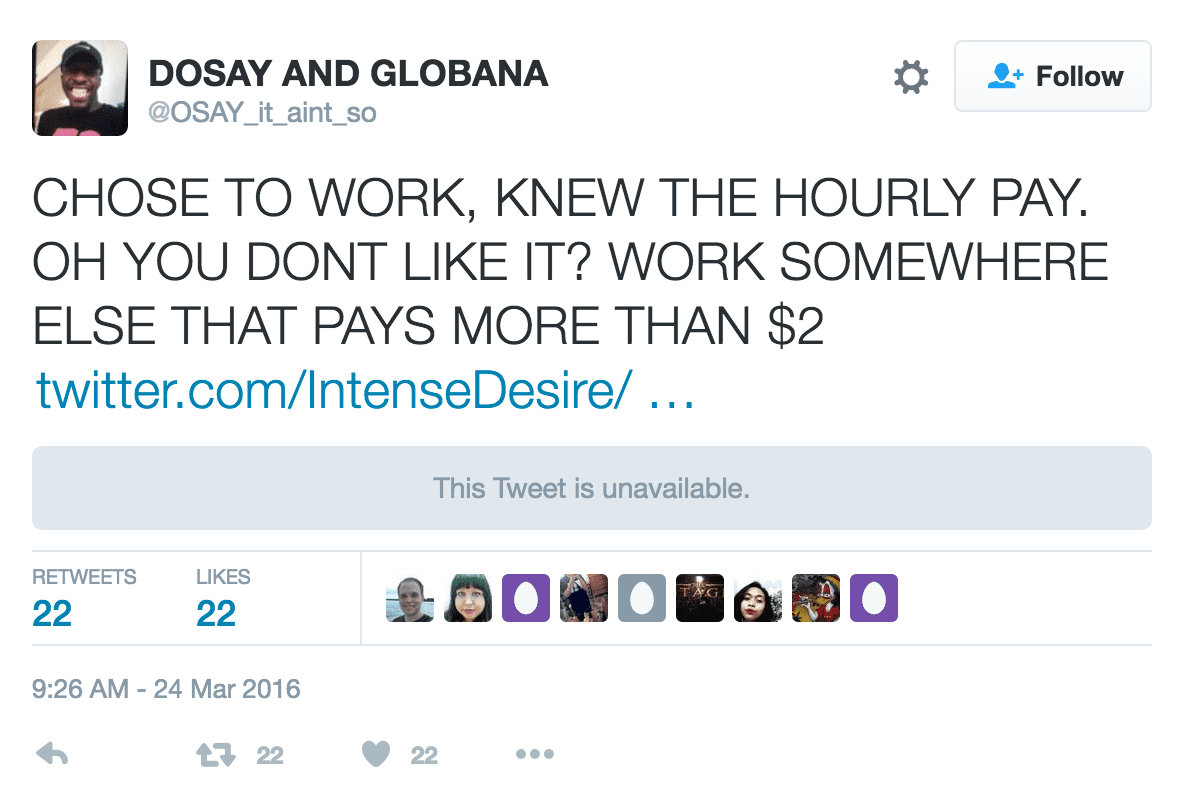 All of which is to be expected on the Internet, I suppose, but the fact of the matter is that the average P.F. Changs server makes only $4.86/hour before tips, according to Glassdoor. And while there are countries all over the world where tips aren’t expected because service industry workers are paid a living wage, that’s not true in the US.

I’m on her side. But I’ve been her, and that goes a long way.