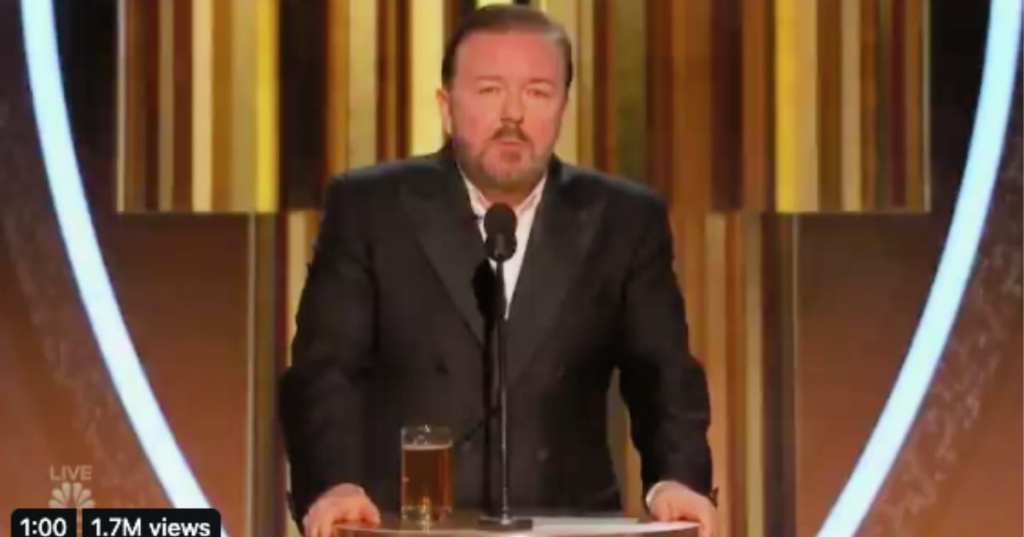 In short, most celeb comedians have concluded that it’s just not worth the hassle. For the second straight year, The Oscars will have no host at all.

And Ricky Gervais? Well, since he was 100% sure he’d never be back to The Golden Globes again, he did everyone (at home) a favor and just let the truth bombs fly.

This is the most savage 1 minute speech you will ever hear in your entire life.
It is delivered directly to the faces of the hypocrite Hollywood celebrities it brutally & honestly targets.
It’s punishing.
It’s awkward.
It’s true.
RT for respect ✊? for #RickyGervais #GoldenGlobes pic.twitter.com/s1hMxRr8ZF

The celebs in the room might not have been thrilled with the takedown, but people on Twitter definitely were!

Check out these reactions. Spoiler alert, Tom Hanks was the best.

Glad to hear him calling out Tim Cook of Apple. Not many are brave enough.

Basic training for spoiled celebrities. They need a dose of this every day. That really was something to watch.

The looks on their reddened, guilty faces: a mix of anguish, anxiety, embarrassment, disgust,
anger, & the notable LACK of clapping, particularly when Gervais told the hypocrites to shut up w/the politics & just accept their awards..#perfection

I think that every person who finds themselves with a platform has a duty to speak their truth to power, even if it basically gets you blackballed.

Do you think he went too far? Was spot on?

Do you think he cares?

I think we can all agree that the answer to the last question, at least, is a resounding no.