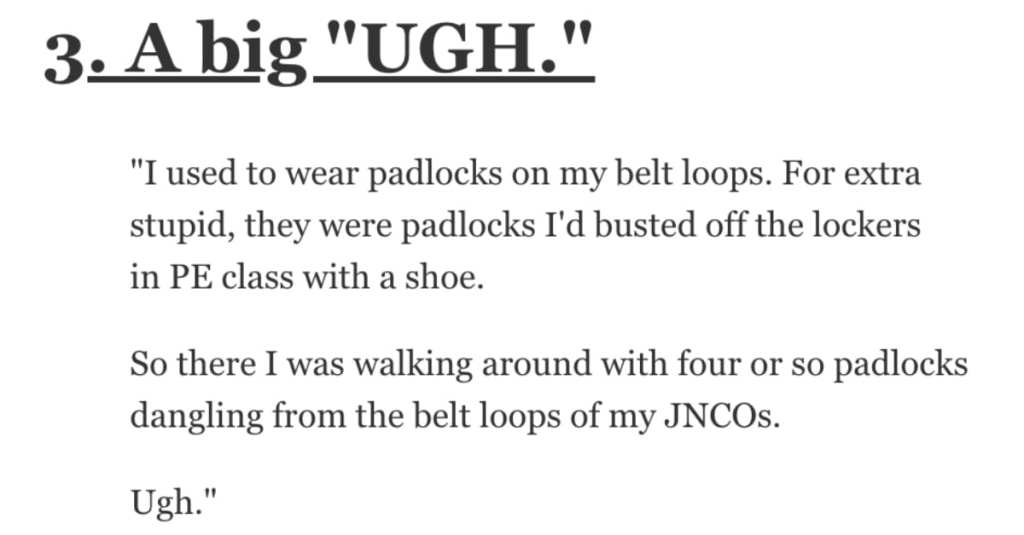 What Are “Cool” Things You Did as a Kid That Now Make You Cringe? Here’s What People Had to Say.

We all have those experiences where growing up can be…awkward…

I guess what I’m trying to say is that life is a non-stop cringe-fest.

What are things you did as a kid you thought were cool but now make you cringe?

Let’s see what these folks had to say on AskReddit.

“I thought raising my eyebrow at every little thing made me look cool.

“Grade 1 I took one of those chocolate coins in gold foil, put a hole in it and ran a string through, and tied er around my neck

“I used to wear padlocks on my belt loops.

For extra stupid, they were padlocks I’d busted off the lockers in PE class with a shoe.

So there I was walking around with four or so padlocks dangling from the belt loops of my JNCOs.

“I remember signing up for a martial arts class and wearing a black and red gi and a red belt on my first day thinking I would look totally bad *ss.

My instructor made me take off the belt and gi top and told me to never do that again.”

“I would breakdance in front of my large family at every event I could.

Unfortunately my father likes to film things for memory so every so often I am reminded of my god awful dance moves as a 10 year old when we watch old home videos.

I would also do finger guns at the camera afterwards like I was the best dancer ever filmed.”

“Wore a brown suede jacket with a Hawaiian shirt to my senior picture day.

By jacket, I mean blazer, and it was too big with a very 90s cut to it – nothing remotely “cool leather jacket” about it. Also, dug out the old yearbook. It’s worse than I remember: it was not suede, it was microfiber faux suede.

But I very much appreciate the approval of the concept.”

“I thought I’d look so cool and bad*ss drinking orange juice while eating mints at the same time without flinching or gagging.

I did this at school and at various events.

Thanks to that, I can now handle doing that no problem but it’s bad knowing why it doesn’t bother me.”

“I remember watching some kind of anime where this dude would smack a tree with a stick for hours to train. So that’s what I did.

In my free time I would go in my backyard and whack my tree for hours with a stick.

But it wasn’t a proper one, it was my granny’s neck scarf LOL.”

“I lived in an apartment growing up. I thought it was hilarious to stand in the entry way of the apartment building as still as possible facing a wall, wearing an oversized t-shirt that covered the pair of shorts I had on, and then wear pants around my ankles…

“One of my senior photos is actually me in leather with a sword in the middle of a cemetery.

“While Mom was busy at the bank teller’s window, I spotted a long row of light switches in a remote area of the lobby.

As a bad*ss kid, I reached up and turned off the entire row, plunging the bank in darkness.

That, in turn, called the cops because bank staff thought the place was being robbed!”

“At around 8-9y/o, I decided I wanted vampire fangs. Best way to accomplish this? Grind my canine teeth with rocks.

Literally cringe as an adult, because they still occasionally sear with pain from a mistake made in a single afternoon.”

“I used to wear two Hollister shirts with both collars popped up all the time.

I hate looking at those pictures in my moms house.”

In the comments, tell us about the things you did as a kid that now make you cringe.