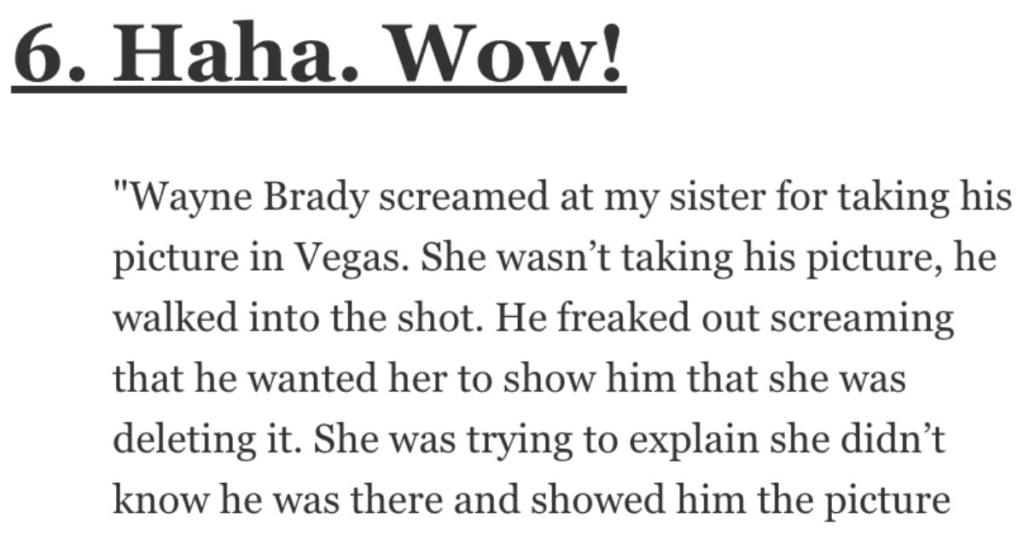 What Famous Person Did You Regret Meeting Because They Were a Jerk? Here’s What People Said.

Are you ready to get some dirt?!?!

Well, you’re in the right place, because we’re about to get a whole lot of it from average, everyday folks about those fancy Hollywood types!

Have you ever met a celebrity who was a total jerk?

“I met Patrick Ewing at the Newark airport when the Knicks were peak 1990s challenging the Bulls for the east every year.

OMG it’s one of my heroes! 9 year old me goes to approach and ask for an autograph to which he replied “get away from me kid”.

“Mark Wahlberg did an appearance at his brother’s restaurant, he refused to take pictures with anyone taller than him.”

3. A lot of bad stories about this guy.

“I know this won’t come as a surprise but Steven Segal used to frequent a restaurant I worked at. Dude was a colossal piece of s**t.

He just treated his very wonderful family like s**t and it was obvious he was cheating on his wonderful wife with the Asian nanny.

This moron would come into a ten table restaurant, all 6’5” and 300 lbs of him, wearing a gold kimono in the south and would wonder why people were looking at him…so he made us take the entry partition down and put it around his table. He was an absolute trash human being.”

It was mid 90’s in NYC and wife and I were at a very popular Asian restaurant with a huge wait. He walks in with an entourage and tries to worm his way ahead of everyone else.

He tried to play the ‘don’t you know who I am?’ card. Hostess was having none of it, said don’t know, don’t care, you’ll wait. They left in a huff.”

“Met Tiger Woods when I was 15. He slapped my hat out of my hand.

A different golfer whom I didn’t know ran up, picked up my hat and asked if his signature would be ok.

I agreed but I don’t know who he was or what his name was but my grandpa was pleased upon seeing it.”

“Wayne Brady screamed at my sister for taking his picture in Vegas.

She wasn’t taking his picture, he walked into the shot. He freaked out screaming that he wanted her to show him that she was deleting it. She was trying to explain she didn’t know he was there and showed him the picture that only had a sliver of him in it when she looked through the shots.

He continued to berate her about not respecting his privacy (in the middle of the Strip). She was in tears apologizing for doing nothing wrong and he never acknowledged he was in the wrong and continued to badmouth her as he stormed away.

I liked his show and one day while I was getting a tour at NBC studios he bumped into me and turned around said sorry and then flipped me off and it’s not like I got in his way.

Walked into me from behind.”

I sat next to him on a flight from Monterrey, Mexico back in 2018.

“Anyone from Pittsburgh can tell you that Ben Roethlisberger is a horrible person.

I have a friend who owns a bar on the South Side and he has, on multiple occasions, just walked into the bar and said “My friends and I are drinking for free tonight.”

He also told Arnold Palmer’s grandson that he doesn’t sign autographs if he’s not getting paid to do so. Legend has it he earned a pretty nasty verbal beat down from Palmer and apparently he’s banned from his golf course.

Arnold Palmer, on the other hand, was an incredibly nice guy.”

“David Cross is pretty miserable. He’s from Atlanta and his sister runs a food truck in town.

Her recipes were all named after David Cross/Arrested Development type stuff. So my wife and I being fans of David asked about it and she told us she was his sister. So for months we chat her up any time we order food from her truck, and eventually David’s in town.

She invites us to come to the food truck park to meet him, so we bring a poster from the early 2000s and are super pumped to meet him. We get there and she’s very anxious and hesitant to introduce us. Weird, but ok.

“No no no, it’s OK I’ll introduce you.” She does and he was incredibly dismissive and unpleasant. Never heard of anyone having a good interaction with him.”

I had to get in touch with him frequently for work (at a nonprofit) for several years.

He was never once even vaguely polite.”

I was on a field trip in middle school and our teacher saw him. She politely asked if he could say something to us or just say hi- we always watched him in science class.

He told her to f**k off and basically berated her for bothering him and asking him to speak to a bunch of kids.

I’m not sure if he was just having a bad day, but it was not the best experience as a child.”

In the comments, tell us about your celebrity encounters.