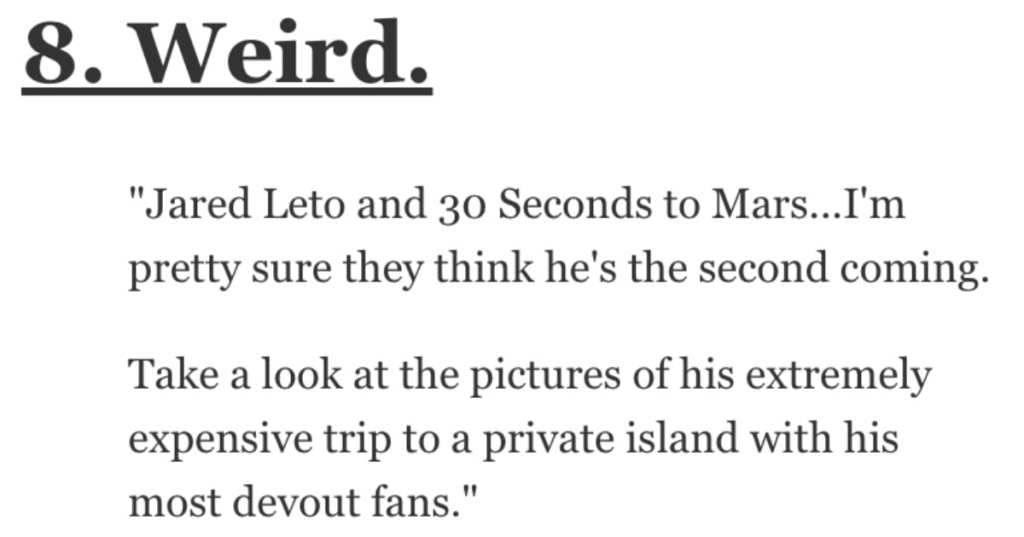 What Fanbase Acts Like a Cult? People Shared Their Thoughts.

Have you ever been to a concert where you weren’t super into the band and you thought to yourself, “wow, these people are fanatical about this group?”

I have…and the band shall remain nameless…for now…

But the fact is that there are a lot of fanbases for bands and other things out there that are INCREDIBLY devoted.

What fanbase do you think acts like a cult?

Here’s what AskReddit users had to say about this…

“As a long time fan of Tool, Tool.

I mean… yeah, the music is good (kind of disappointed in their last album, though) but the number of people spending forever dissecting every last word of every Tool album and je**ing off over the random time signatures is a bit over the top.”

My brother in law is a big time Crossfitter. His whole personality is literally his Wife, kids and Crossfit. Which I’m cool with. He’s really good people.

But he gets all frustrated when they come out to work cows with me and by 4 o clock he’s dragging a** and us out of shape looking cowboys are still rolling along strong. Granted at 4 o’clock we’ve been going for 11 hours.

And to be honest it’s a really good workout program. The BIL talked me into it, and I did it for 2-3 years. I also payed more attention to my diet. I got to where I had a 6 pack and looked ripped. It was cooler n hell.

I’ve kinda fallen off that wagon though. I’m doing traditional weights at home and a 20 minute yoga routine every day. I’m convinced with how I work, coupled with a bit of yoga to stay flexible is what will keep me in the best shape for the longest.”

Well… not all of the crypto investors, but the ones who rave about it online are certainly pretty cult-like.”

He’s the Chris Chan of game devs, and no sane person wants to associate with him.

Yet he still has an entourage of underaged fans that still believe that he will one day finish the c**ppy game (which btw is infamous for s**ualising teenagers) that’s been in development for 7 years now.”

I’m prepared to get lots of h**e but I’m sure I’ll get agreement too because it’s so true.”

“Beyonce and her cancerous fanbase that treat her like this otherworldly being.

She’s got a nice voice but everyone acts like she’s an angel sent from heaven or something.”

As a Jojo fan I can confirm it is at least somewhat like a cult. Once you’re in, you can never leave.

Not that I really want to, but my point still stands.”

“Jared Leto and 30 Seconds to Mars…I’m pretty sure they think he’s the second coming.

Take a look at the pictures of his extremely expensive trip to a private island with his most devout fans.

Pretty sure it is an openly acknowledged cult.”

“Rick and Morty fans were my first thought.

The show might be funny, but the people who act like liking it is signs of a high IQ or s**t like that make me not want to get into it.”

There is always someone who is more passionate/knows more and will make themselves known about it. Alternatively they say you can’t be a real fan because you don’t know x or y.

I enjoy a few sports. I have teams that I support. But I don’t know the ins and outs of everything they do. Doesn’t stop me being a fan but it feels like to some fans you are worse than fans of other clubs.”

I’ve eaten a ketogenic diet before and looking back I was so annoying. I needed to tell everyone 24/7 that I didn’t eat carbs and how great keto was. And soooo many people are like that about keto. Keto is life, love, and the answer to our eternal questions!!!

Gosh I was so annoying, I’m grateful for every friend who didn’t slap me.”

I am going to admit that I do post on the sub and do like her music, but god d**n, they want her to constantly drop music all the time.

I’ve been a Brand New fan (and still am even through all the s**t that came out) for years and I know what it’s like to be waiting for new music, but man, these people don’t understand that they just got three album in nine month span.

Also, I don’t get why their so eager to meet their idol. Don’t they understand that you should never meet your heroes?”