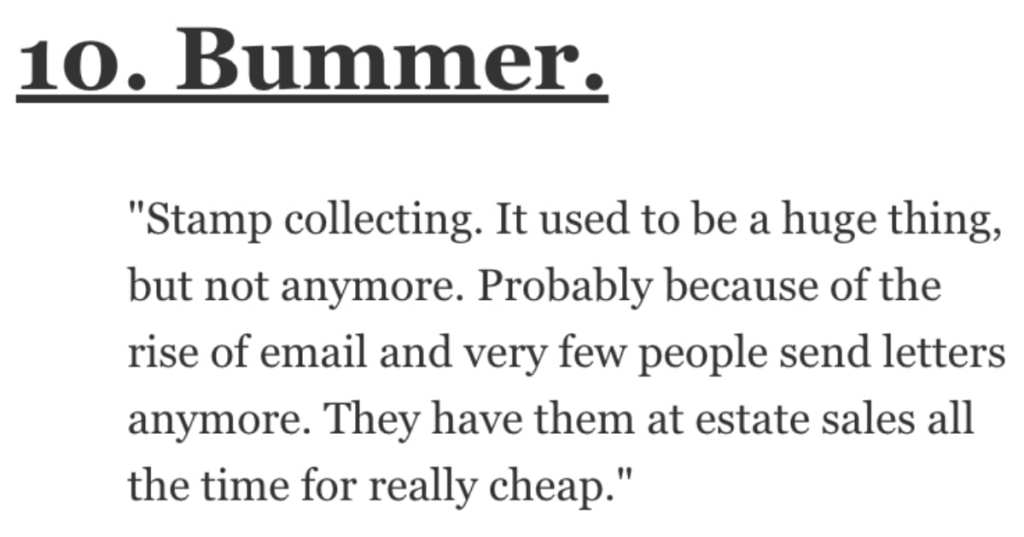 What Formerly Popular Hobbies Are Fading Away? Here’s What People Said.

I’m excited to read these responses!

Because I love to learn about how people live their lives and what they like to do in their spare time.

And some things that people like to do for fun go away and fade from our view because folks stop doing them on the side.

What formerly popular hobbies do you think are fading away?

“This might be a bit controversial, but since I do this, I’ll mention it because that’s how I feel.

Don’t get me wrong, there are still applications for live drums. Especially if you want the groove or feel of a live drummer.

But bedroom music production has just skyrocketed even more due to the pandemic. And not everyone has enough space for a full acoustic kit.”

I remember as a kid listening to my dad’s radio and him always having a good time and genuinely enjoying a good rag chew.

I got my license and tuned into some of the local repeaters. Found some nets with the most depressing things I’ve ever heard. People talking about their terminal illnesses or how prescription costs are ki**ing them.”

When I was a kid, we all built and glued and fired off model rockets with rocket engines and stuff.”

I buy a postcard of each place I visit. some places I have visited in the world, very hard to find a postcard. (hardest country, as were only here for a day on a cruise, Dominica).

“I feel like everyone over a certain age has a fancy cabinet full of fancy China and silverware that is never used for anything.

It seemed like it was a thing people would receive as a gift at their wedding. I always wondered what the point was.”

I worked at a slot car track in Bellevue, Washington in 1966 and 1967. There was this 9 year old kid who came in, who signed onto the track using the nickname “Trey”.

It was Bill Gates. And yeah, he was quirky enough to remember from back then. A pain in the a**, but in a likeable way.”

I know what a cliché. When I was younger everyone had a Croquet set and it was a great way to enjoy time with friends on a summer day in the garden, whereas now I don’t know anyone that still owns one.

Maybe a strange one but this question got me thinking.”

There is a store in our town square that has been there for like 50 years that specializes in model trains. (It’s called a train and toy store, but there are almost no toys there). The store is interesting to walk around in, if you are not claustrophobic, but he must not sell very much because he can’t pay the rent anymore.

He is closing and moving out of town to some building he owns. Again, the stuff looks cool but I have never seen anyone buy anything.”

“Geo caching. Which is weird because I still do it sometimes while biking around.

But caching apps rarely alert me of any finders in the apps now.

I put $20 in, what used to be a SUPER popular cache that people would visit daily like 15 years ago… I later turned, about 6 months later and the same items including the $20 were in there.”

“Stamp collecting. It used to be a huge thing, but not anymore.

Probably because of the rise of email and very few people send letters anymore.

They have them at estate sales all the time for really cheap.”

As a teenager, I loved writing letters to new people and receiving letters from all over the country and the world.

Everything is instant now, but nothing beats that feeling of getting a letter in the mail that is specifically for you, that is not a bill, ad circular and comes from someone that genuinely wants to brighten your day.”

Folks no longer want to play dress up in itchy wool and educate folks on whatever period was their jam.

It’s heyday was late 1990s when you could find a group that did just about any period you could imagine.”

What hobbies that used to be popular do you think are fading away?