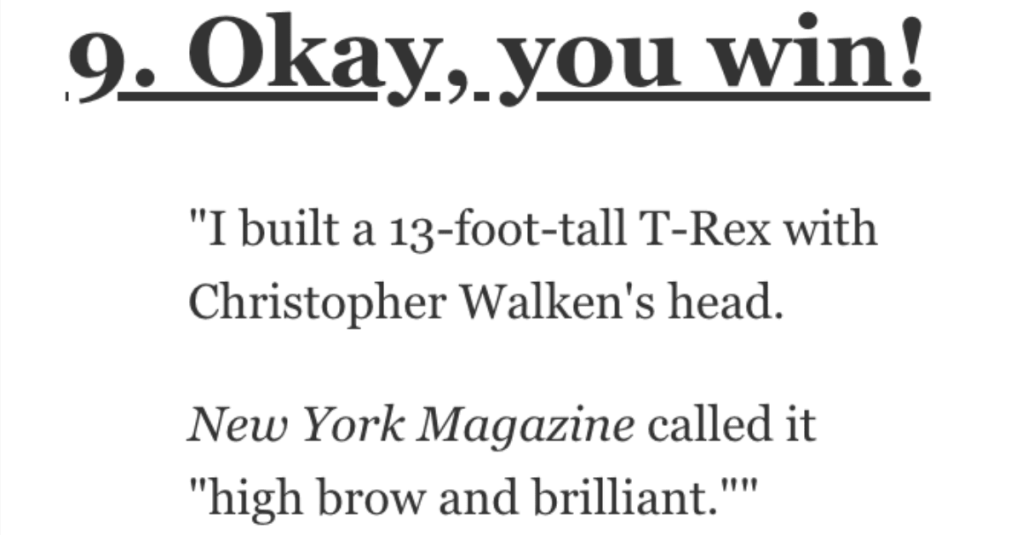 What Is Something About You That Sounds Made Up but Is 100% Real? Here’s What People Said.

What’s something about you that other folks would probably think is made up but is totally, 100% true.

We all have those kinds of things in our lives! That’s what keeps this whole thing called LIFE fun and interesting!

And I, for one, love hearing these kinds of stories from people.

Here’s what AskReddit had to say about things about themselves that sound made up but are totally legit. Let’s take a look.

“My dad’s name is Luigi and my uncle’s name is Mario.

I forgot to add that my dad is also a plumber.”

“I grew up “on the wrong side of the river”, was considered by all to be the town loser, and went to work as a janitor while still in high school.

Then… in my 40s I set a goal for myself (while still working full time) to take one class at time until I either graduate or die, whichever comes first.

Never let the arrogant elitists define who you are or what you can be!”

“My great-grandma ran a brothel back at the turn of the 20th century. She was Algonquin and people were pretty racist back then so she had a hard time getting business.

Since it was a coastal town (Maine) she bought up a couple leaky old rowboats and would load them up with hookers and booze and row them out to the ships at night. When ships came in to port most of the crew would get shore leave and hit the bars and brothels in town, but they always had to leave a few sailors on the ship to keep an eye on it.

My Great-grandmother figured those guys had money too and probably felt left out. She basically set up waterbased lot lizards. Or UberHoes.

My Grandpa and his sisters grew up in the brothel and no one would talk to them or socialize with them. My Grandpa met my Grandma picking green beans for a local farmer. They fell in love. When they wanted to get married they had to leave the state to get away from her family that were utterly disgusted that she would marry the son of a whore.

So they ran off to Detroit because GM was hiring and that’s how my family came to Michigan.”

“I was once sponsored by the CRUNK energy drink company for sailing. I imagine I was the only sailor on their list.

I literally just emailed them saying that I sailed and asked if they wanted me to put stickers on my boat.

They sent me a few cases of the drink, t shirts, hats, the works. My car was known as the Crunk-Mobile.”

“My great grandfather worked in the textile business and started importing rayon fabric from Japan in the late 60s and 70s.

Keep in mind this was during the early days of synthetic fabrics and travelling to Japan was not all that common. On a business trip, he met some Japanese business men who were selling newly designed transistor radios.

His contacts wanted to setup an exclusive import agreement for their electronics to North America, but my great grandfather declined, because how many of these radios could you possibly sell?

Turns out that was a short sighted business decision, because that company was called Sony Electronics. He turned down the exclusive import contract for Sony.

On the other side of my family, my Canadian relatives walked away from 100 acres of land in Alberta during the dust bowl and great depression. They decided it was not worth paying the taxes on their land. Turns out that land was right in the heart of the Alberta oil deposits.

Also on my mother’s side of the family, they used to have a citrus orchard near Los Angeles. They sold it cheap to some land developers. That farm was right at Hollywood and Vine.

My family on both sides is bad at seeing long term investments.”

“I was at a store when Tony Hawk was signing autographs. I was only 10 at the time and was a huge fan.

One of his early video games had just come out. The store had a couple tv’s on the wall and some video games to play. Being a kid I waited for one controller to open up and someone leave. A kid ended up leaving and I grabbed the controller and started playing and minding my own business.

A couple minutes later the store wanted to grab photos of Tony playing his own video game. He came over and grabbed the second controller and began to play multiplayer with me. Probably played for 10 minutes.

The bonus was it was also my 10th birthday. So I played Tony Hawk Pro Skater with Tony Hawk.”

“I found out my “father” wasnt my biological father in 10th grade Biology class. We were learning about blood types and traits.

I raised my hand thinking I was a smart *ss, “You’re chart isnt accurate, my dad has AB negative and I’m O positive.” My teacher said “I think your mom has some explaining to do!”. And we all chuckled.

Turned out, he was not my father.”

“I was a rocket scientist

I worked on the 114-AGM. The science was ‘verifying’ rocket bodies. The back bone of science is to repeat experiments. My job was to make sure we were gonna get the same result every time.

People call me a liar all the time because the idea of a ‘rocket scientist’ is Von Bruan.”

“I built a 13-foot-tall T-Rex with Christopher Walken’s head.

I didn’t get the chance to tell my story in court as they pled guilty before I was called. I was drunk and I came out the pub I was in to get some fresh air. I walked past 3 guys and one of them asked me for a cigarette. I told him I don’t smoke and he became immediately aggressive.

I argued with him for a while and his friends started shouting at me and threatening me. At this point he kind of disappeared behind me. One of the others showed me a knife so I turned and walked away. I knew they were following me as was walking back to the pub.

I had a bus stop on my left hand side and a building on my right. I looked up and saw the first guy walking towards me. It was fight or flight and I had nowhere to fly to so I decided that attack was the best form of defence.

I think I managed one punch before the 3 of them jumped me. They had been robbing and beating up people all over town for about 2 weeks beforehand.”

“In Minnesota in the 70’s, I was sixteen taking my drivers test.

Nervous as hell. A highway patrol officer was the “road tester” back then which was even more nerve wracking. But I thought I was doing pretty good the whole time because I had lots of practice with my parents.

THEN towards the end of the driving test, I was at a “T” intersection across from a hospital, I was hesitant to turn onto the road because traffic was busy. I could tell the officer was getting a little impatient, but he was nicely telling me to be a little aggressive.

Suddenly at the hospital across from us, someone pushed out a screen from a window on the third floor (psych ward). A women jumped out the window onto a garage roof underneath, then jumped to the ground and ran across the road right by us.

The officer had me turn around (I was in my mom’s car) and chase the girl in the neighborhood. When I would pull up to a stop sign during the chase, he would say “GO GO GO, JUST GO THROUGH IT”. After awhile, when she started to get away, he gave up with me being the “chase driver” and told me to head back to the DMV office.

I was a complete shaking mess at this point – ready to accept the fact I would not get a license anytime soon (devastating for a sixteen year old boy). He grabbed my score sheet. Said “You passed.” And handed it to me. I got an 88 score. He ran to his HW patrol car and tore off to continue the chase.

I go in the office a complete mess. My Mom was already really nervous because we were gone so long, then she saw me looking like a ghost. She said “WHAT HAPPENED”. Told her I passed, then told her the story on the way home. She wasn’t amused and pretty p*ssed at the highway patrol guy.

What are some things about you that sound made up but are true?