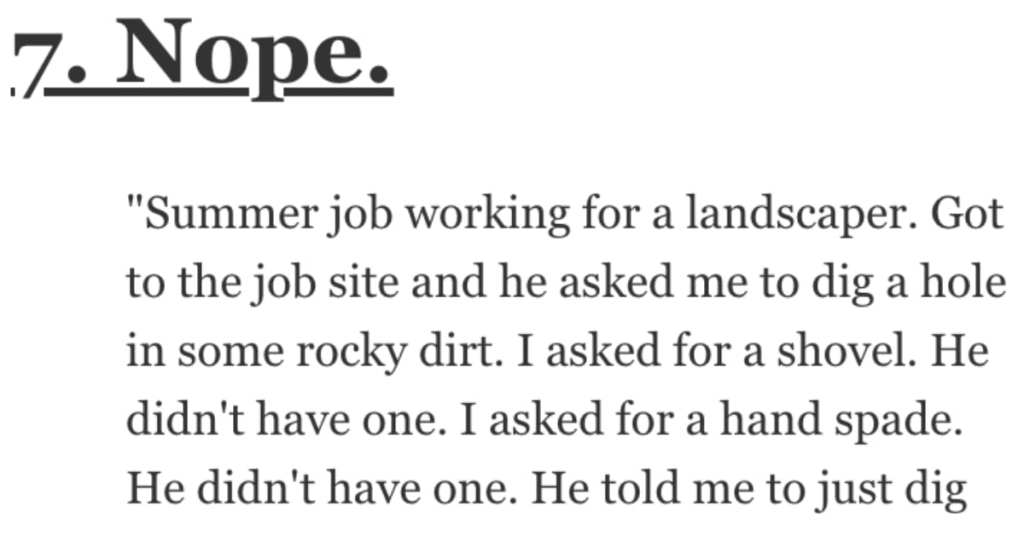 What Made You Quit a Job on the First Day? People Shared Their Stories.

Okay, I have a confession to make.

One time when I was a teenager, I quit a job after one day.

But I’ve only done it once in my life, so don’t give me such a hard time, okay?

It was at a video store that I had always wanted to work at, but after the first (and only) day, I knew it was a horrible idea…but I’ll save that story for my memoirs…

What made you quit a job on the first day?

“I took a job at a lock down residential treatment center as I was desperate for a job. The interviewer said most of the kids were court ordered, and were a step away from juvie.

The interview didn’t go well so I was honestly surprised when they called me offer me the job. The morning of training was going over all of the state and federal laws that governed the place, like resident rights and staff to resident ratios and the like.

The afternoon was a tour of the facility where it became readily apparent that exact none of the laws we’d just covered were being followed.

I left at the end of the day and never came back. I had a feeling something bad was going to happen at that place. A few months later they got shut down after a riot that results in several serious injuries to both residents and staff.

Glad I wasn’t around for that.”

“My first internship was at a brazilian teen detention center (it’s akin to a prison, but Brazilian law has some distinctions between crimes committed while as an adult or as a teenager – teens go through socio-educational measures).

These teens as young as 12 had escaped their block. A few minutes later an officer comes knocking on the doors of the offices and yelling for everyone to run outside because a fire had broken out. Some of the teens had set mattresses on fire in their cells.

I didn’t really nope out. My teacher did (she hadn’t even been there that day). So I was forced by the university to choose another place to intern at. Oh well.”

“I was 17 and working pre-cast concrete.

Refused to use a rusted to sh**ty ladder. Supervisor called me a p**sy, got up about 7 rungs before his foot went through one, heard his foot snap as he fell.

I called an ambulance and walked to my car in the parking lot.”

Swept under my station when we were closing. Giant brown pile came out with broom from under low-boy fridge. Pile began to scatter.

It was hundreds of roaches.

“My first ever job.

I was thirteen and I would be delivering phone books from the back of a van through peoples letterboxes.

So I’d be in the back of the van with the phone books and there was an older guy driving slowly while I went back and forth to the van/houses with the books.

At one point the van was getting quite empty so there was more space to move around and we had finished the delivery in the street we were paid to deliver to and he drove to another.

While driving there he drove lets say aggressively and I fell inside the back where the books were. I wasn’t sitting in a seat as the van had no seats in the back. As I put my hand out to steady myself I accidentally laid it across a portable radio that had its antenna extended but the antenna was also broken half-way and razer sharp.

It sliced the palm of my hand clean open 3-4 inches. I can only describe what I saw as gruesome. I said to him to pull the van over and I needed help. He saw my hand and just threw me a plastic bag, the kind you’d get at a supermarket and told me to wrap my hand in it.

Then .. he continued with the deliveries, at-least he delivered the remaining books himself.

I should have been taken to a hospital or at-least home to my parents. I quit after that and never showed up again. As you can imagine my parents were quite angry at him.”

“Gas station. The manager gave me a weird vibe.

I made it through the first day but didn’t go back.. Found out later he cornered another girl in the back of the store and she had to fight her way out.

He told me to just dig the hole wit my bare hands and then he drove off to another site leaving me completely alone. I dug for a little bit and then said ‘f**k this’ and left.

Had the job specified that I needed to supply my own tools I could’ve but it didn’t and I wasn’t going to work for somebody that expected folks to dig through hard, rocky soil with their hands.”

“Young and naïve right out of college took a “marketing” job. My interview was great, nothing shady seemed to be going on and no immediate red flags.

After 4 hours of training, my first day consisted of going door to door in a suburban town trying to sell cable to older people. We were told to dress for business, so I’m hiking around for miles in my best skirt, suit jacket and heels. Hours were from “9-5” but we didn’t get back to the business until well after 10pm.

Not to mention, the person I was shadowing was able to make a sale to an older gentleman who seemed to have memory issues. I noped the f**k right out of there.”

“Worked in a hotel for a day.

No one told me where anything was. Got chewed out for it.

Guests enjoying their meals told me to pay no mind/I was doing a good job and that my boss is a c**t.

I told the manager that I was quitting and wouldn’t be doing the next shift.

I arrived the next day, returning a work uniform and my supervisor approached me and yelled at me for being late. I told her I already quit but if I was working, technically I was 5 hours early for my shift.

My first day we had to attend a class where they teach people how to upsell folks. Basically walked you through ignoring what they ask you for and using their ignorance of the equipment against them. I thought that was really scuzzy.

Then they went on to tell us about a commission style bonus program that basically forced employees to upsell everyone.

When we took the break for lunch that first day I peaced out and went home. Never got paid for those four hours, but I never regretted bouncing on that.”

I was trying to quit a horrible job, and this job was on the other end of town. I needed enough money for the bus pass, and to make up the difference and more of quitting my old job. They hired me and showed me my schedule.

I showed up for my first day, things are going good, then my manager called me in, sat me down, and explained that they’d have to cut me down to 15 hours a week because they’d hired too many fu**ing people. I explained, painfully, that I had to take a bus an hour each way and wouldn’t be able to pay rent or food after that.

He said I could always hold out and hope people quit. I told him he could start with me, took off my apron and stormed out in tears.”

“I was hired at a chain restaurant to be a hostess.

I was so excited because my last job was washing dishes and because of my eczema, I had to quit. It was too painful to do that job.

So, I arrived at my new job dressed up to be a hostess and those mfers took me back to the kitchen to do dishes because the dishwasher just quit. I noped out of there real fast!”

Have you ever quit a job on the first day?