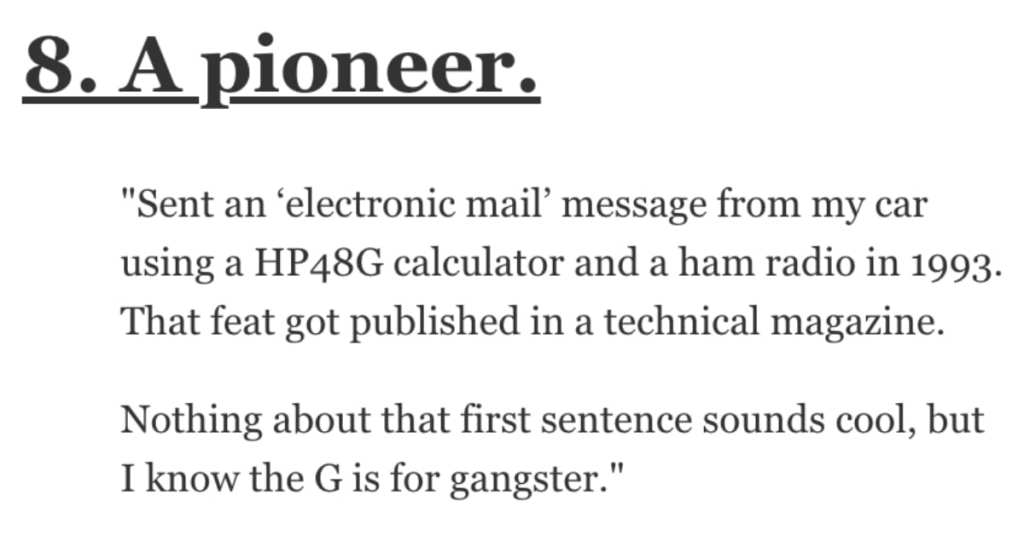 What ‘Thing’ Were Into You Into Before It Became Cool? Here’s What People Said.

Have you ever been into something that you really loved before it became a huge deal?

It’s kind of a weird phenomenon and you feel like you and your friends were too cool for school because you were on the cutting edge, baby!

Maybe it’s a band or a movie or an artist or anything that happened to be underground for a while before it got really popular.

So what were you into before it got cool?

Let’s get super cool with some folks on AskReddit.

When it was invite only. My friend had a small amount of invites.”

“We weren’t allowed to have cola much growing up but we drank a ton of seltzer water. I kept drinking it as an adult and people made fun of me for how weird it was because it’s not a thing people casually drank.

They thought it was either a mixer – like they acted as if I was drinking straight margarita mix – or something from a froufrou health store.

Then La Croix came along, or whatever it was that made seltzer suddenly cool a few years ago. I mean I’m glad it’s even more common with more flavors and stuff but I used to get teased so much for it!!”

“I had a friend in high school ask me in math class one day if I wanted to go to a concert with her that night. Her sister had extra tickets and she thought I’d want to go.

It was a New Kids on the Block comeback tour and I said sure why not, my mom didn’t mind me going.

We sat around chatting before the show and the opening act was some woman who appeared to be drunk but her music was really good!

Nobody had ever heard of her and she only did a few songs but her music was a total ear worm that was hard to get rid of once it took hold. Went home that night and googled her single ‘Just Dance’ and downloaded it immediately.

And that’s how I discovered Lady Gaga.”

“I used to record myself playing video games when I was like 5 or 6 when my parents gave me the VCR they replaced in the living room.

Because of this early hobby, me and a friend did video game playthroughs on YouTube in 2007. We were certainly not the first but we were damn early.

We also used a cap card straight out of the gate rather than doing the old recording the screen crap that looked terrible.”

They had a video where they spliced all these old NES games together into a skit and it was friggin’ hilarious.”

It used to be completely free, browser based, with no ads.

It was the only way for me to watch new episodes of Heroes every week.”

“Sent an ‘electronic mail’ message from my car using a HP48G calculator and a ham radio in 1993. That feat got published in a technical magazine.

Nothing about that first sentence sounds cool, but
I know the G is for gangster.”

“I first saw The Simpsons when it was a sketch on The Tracy Ullman Show, and thought it was the funniest thing I’d ever seen.

I was ecstatic when I learned they were making a full cartoon of it.

I watched it religiously up until about season fifteen or sixteen before I finally switched to every once in a while like we all eventually did.”

“Listening to Nirvana’s “Blew” on student radio (NZ) in 1989 and thinking, these guys are good.”

“I read Fight Club because it was featured prominently in Borders.

At the time, no one had heard of it or its amazing author.”

“I was attending ComiCon before most people knew it existed. Show up the day you want, but a ticket, and go in and shop.

I have some incredible collectible movie memorabilia from back then. Never thought it would turn into the enormous event it has become.”

“I got Instagram when it was a photography app back in 2011.”

“I saw the pilot episode of South Park. I thought it was the funniest sh*t ever. Showed it to a co-worker who said – thats the stupidest thing I’ve seen.

Fast forward to when South Park goes nuts – and he comes in and says – have you seen this hilarious cartoon called South Park?

I said – do you remember that pilot episode showed you…..?

He shut up for awhile after that.”

In the comments, tell us about the things that you were into before they got popular.