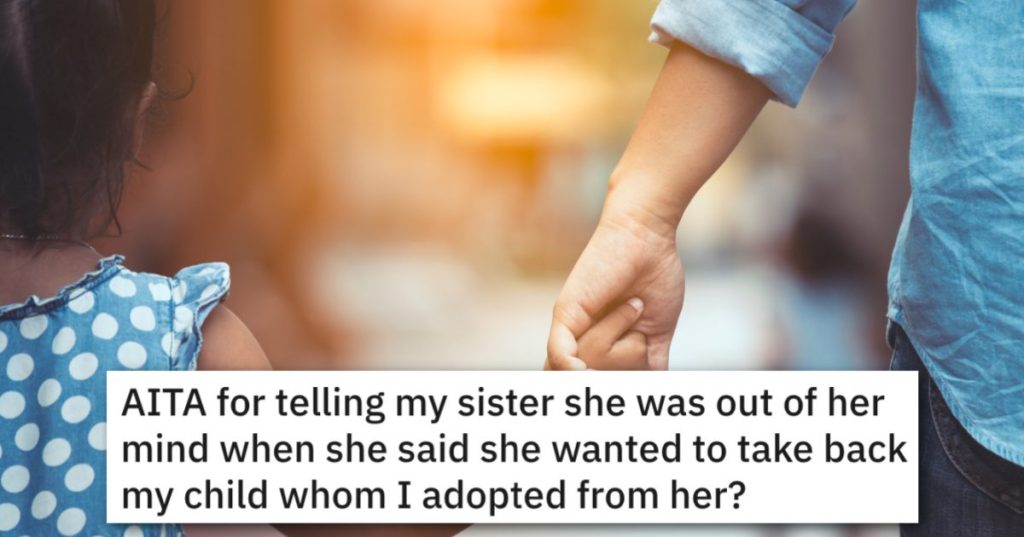 What Would You Do If The Biological Mother Wanted Her Child Back?

I imagine that before choosing adoption as a route to becoming a parent, people have many considerations, fears, hopes, and ideas about how the future will look for their family.

I don’t imagine that many people think that, 11 years on, a biological parent will return and simply as for their child back. Because that would be crazy, right?

Well, crazy it might be, but that’s exactly what happened to this OP (and honestly, I’m not sure that’s even the wildest part of the tale.

OP is older than her sister and was experiencing infertility when her younger sister got pregnant after a one-night stand and decided to give the child up for adoption.

OP adopted her niece and never looked back; her sister has been in and out of contact but has never wanted or asked for a relationship with her daughter.

Several years after the adoption her sister did run into the man she believed to be the father of her child and, upon learning of the girl’s existence, he reached out to meet her.

My (36) sister N (29) got pregnant at 18. I am infertile and knew I couldn’t have kids so when N said she was giving her baby for adoption, I decided to be her mom.

For a bit of background, N got pregnant by a one night stand and she apparently didn’t remember or know the father at the time of birth but when V was 2, a man T (35) messaged me on social media claiming to be the father of my child. N had run into him at a club and drunkenly confessed to the pregnancy.

He and OP have now been married for 7 years. (I know).

We met up, he bonded with his daughter and well that man is now my husband of 7 years.

Recently her sister got back in contact, telling OP how she had recently gotten married but since her husband is infertile, they were struggling with how to expand their family.

When OP asked about the potential of adoption, the sister asked for her “baby” back – 11 years later.

Coming back to my sister, she called me yesterday. Although I was surprised at her call, I picked up. We made some small talk, then she said she had just gotten married a year back and both of them wanted children but couldn’t because her husband was infertile but really wanted kids.

I asked her if she wanted to adopt and she said she would just need to get her baby back.

When OP confessed about her marriage to the girl’s father and offered to let her sister have a relationship as an aunt, her sister blew up.

I was speechless for a few moments before replying that if she wants to meet my child as an aunt she is welcome to and we both can sit V down and explain the reason for her absence but she can’t just ask me to give up my child.

She said she’ll sue me as she’s the birth mother. I told her she was out of her mind and I told her about T. She exploded. Calling me names and saying I stole her life. I got too emotional and hung up. T came home from work and on explaining to him, he was beyond furious.

The family is siding with the sister, saying that OP is “rubbing her face” in her life.

I then got a call from my parents saying I was an asshole for telling N she couldn’t she her baby. I said I never said that and I welcomed her to bond with V but they refused to listen and said I was being insensitive and harsh and flaunting my family.

I now feel bad because me and N were very close as sisters and I feel quite close to her situation since I know the struggles of infertility. T said there was no way he was letting my sister have full time and I agree but I want to know if am the asshole for being too harsh and telling her about T.

Y’all. I’m not sure where exactly to start with this one, so let’s just turn it over to Reddit, yeah? 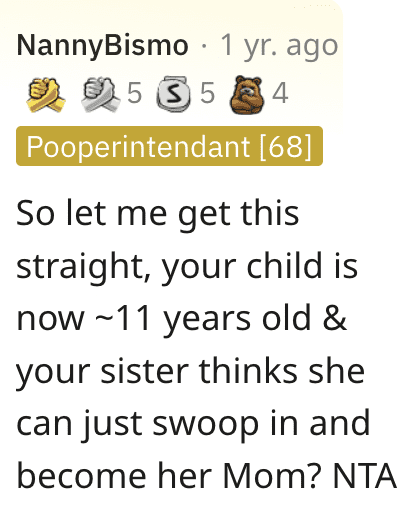 If she really cared about her daughter she wouldn’t even ask, right? 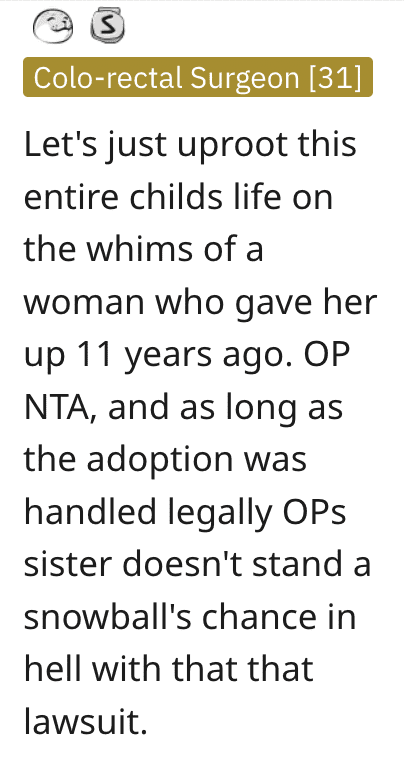 One would hope the mother would have no case here. 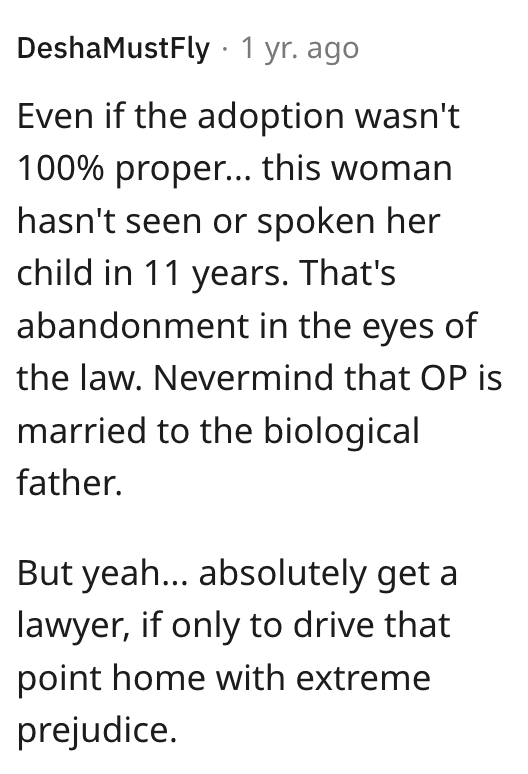 For those of you wondering no, it doesn’t work like that. 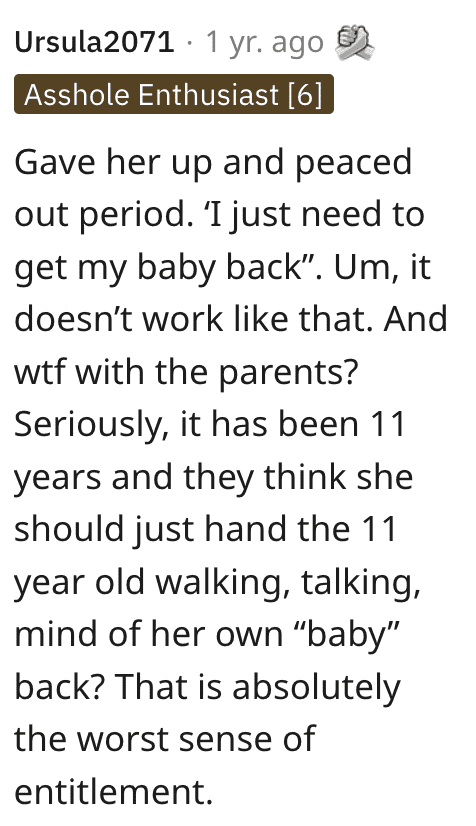 Plenty of people warned OP never to let her sister alone with the child, for reasons. 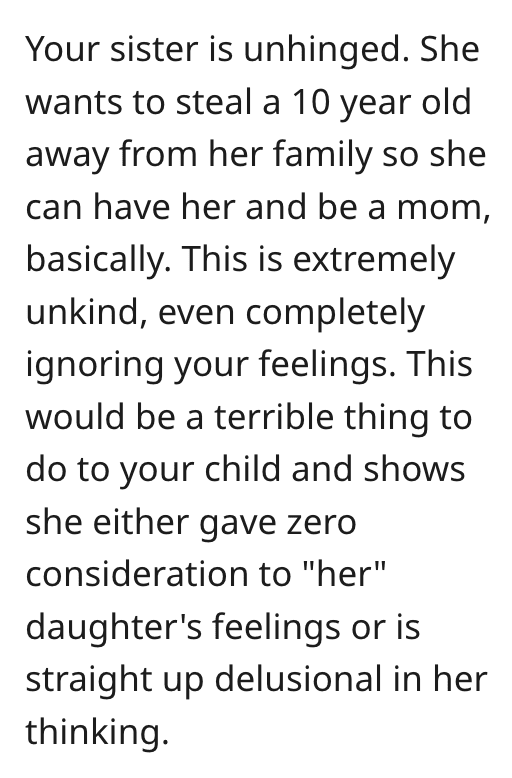 This is definitely crazy talk, in my opinion, and I would probably try to keep them apart, too.

What about you? Would you let her sister back in the door? Tell us in the comments why or why not?