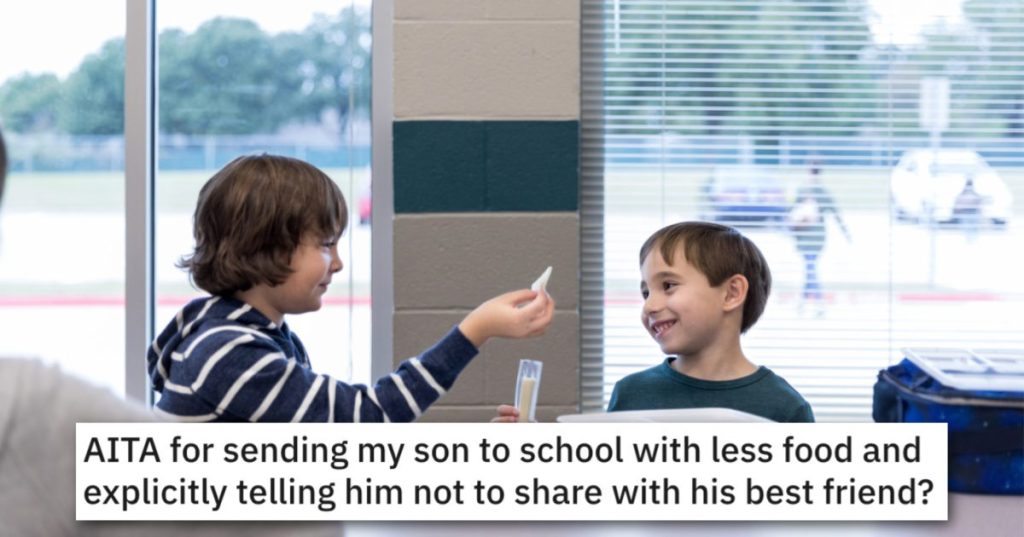 Being a mom is an experience you can’t fully understand until you’ve done it – and it comes part and parcel with a lot of feelings, I can tell you that.

It’s not only your kid that you feel for, it’s suddenly all kids, because the Mama Bear instinct is strong.

This woman’s son has a best friend who she realized after some months was being sent to school every day without a lunch – and she realized this because her son was sharing his own lunch and coming home super hungry at the end of the day.

She also found out that the friend’s home life was suspect at best.

This situation began a year ago and blew up in our faces last week.

Gregory and Peter have been friends since elementary school. Last year, I noticed that Gregory would be ravenously hungry after school every day. He would come home and eat a frozen dinner or something, and then help himself to seconds at dinner time. I chalked this up to him being a 12-year-old boy and let it be.

Something about the situation was nagging at me though, and while Gregory wasn’t clear about why at first, he eventually came clean. Peter was being sent to school every day with no lunch. It looks to me like a typical case of neglectful and unfit parents. The one time that Gregory went to their house he came home with comments about it smelling really bad and his Peter’s parents locking themselves in the garage for hours.

Like any good mama bear, she began sending enough food for the friend as well.

Feeling bad for Peter, I decided to discretely begin giving Gregory more food every day, just about doubling all his food. Over time I became less discrete and began packing a separate lunch for Peter.

I was never thanked for this by anyone, but I knew Peter was eating the food I sent.

Now, though, times have gotten tougher for OP’s family (like they have for all of us), and she can no longer afford to feed two kiddos instead of one.

She’s told her son in no uncertain terms not to share his lunch with anyone, even his best friend.

This year, things are different. Money is tighter for personal reasons and frankly with how expensive things are, I have decided not to spend exorbitant amounts of money supporting someone else’s child.

I sat Gregory down and told him that I would be packing him one lunch which is for him and him alone. I made it extremely clear: do not share with anyone, and this includes Peter.

Now the friend’s mother has called, railing about her withdrawing her son’s food without warning and OP is feeling conflicted – she knows it’s a child that needs food but it’s not her child, so what is her responsibility.

Gregory followed my instructions until one day last week I got a phone call from Peter’s mother. She was livid that I had cut Peter off without a single word.

I asked her when it became my responsibility to feed her son, and she responded that if she had known I wasn’t sending Gregory to school with “too much food,” she would have handled it herself. I asked if she remembered why I began sending him to school with two lunches in the first place and she hung up on me.

I feel conflicted. I know I’m having my kindness thrown back in my face, but did I approach this situation incorrectly? 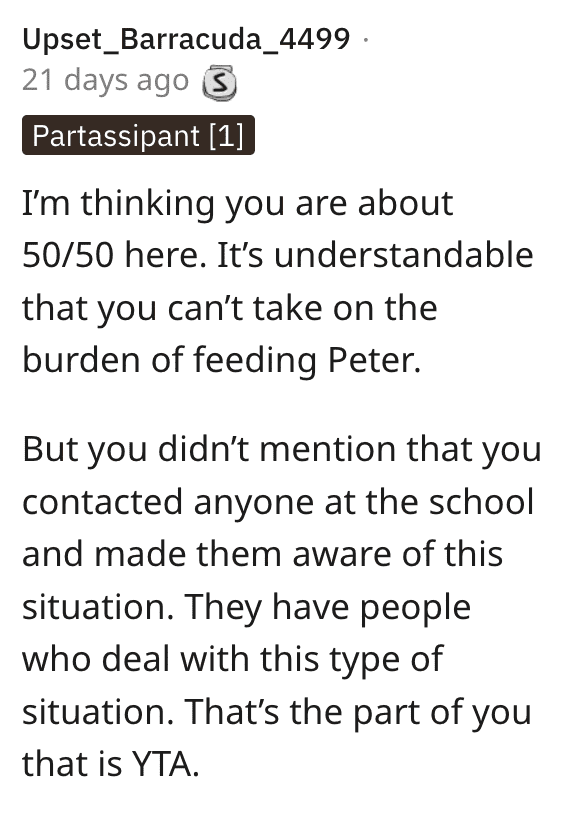 This person agrees, thinking that something seriously bad could be going on. 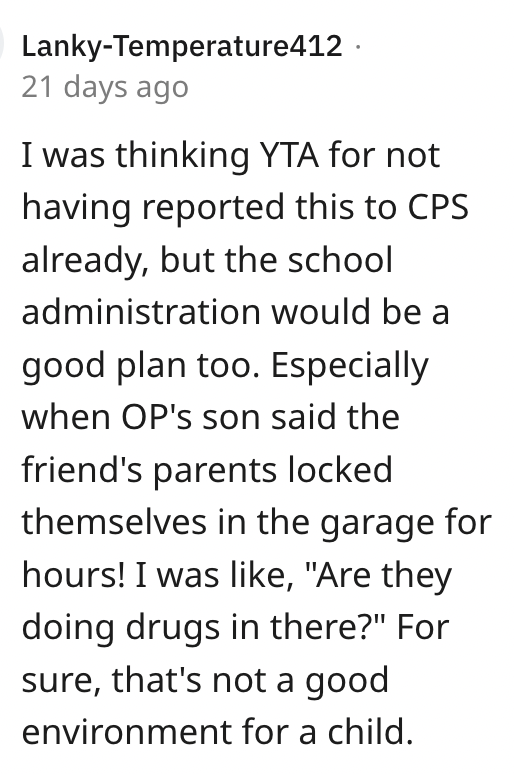 A few commenters were a bit more judgmental of OP’s actions.

And others wondered what this might be doing to her kind-hearted son. 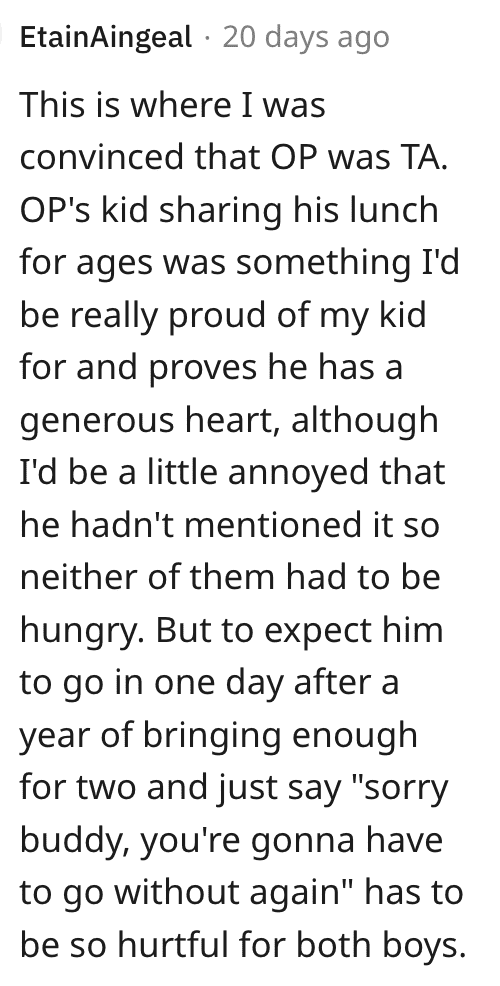 This whole comment made me feel so badly for the poor friend. 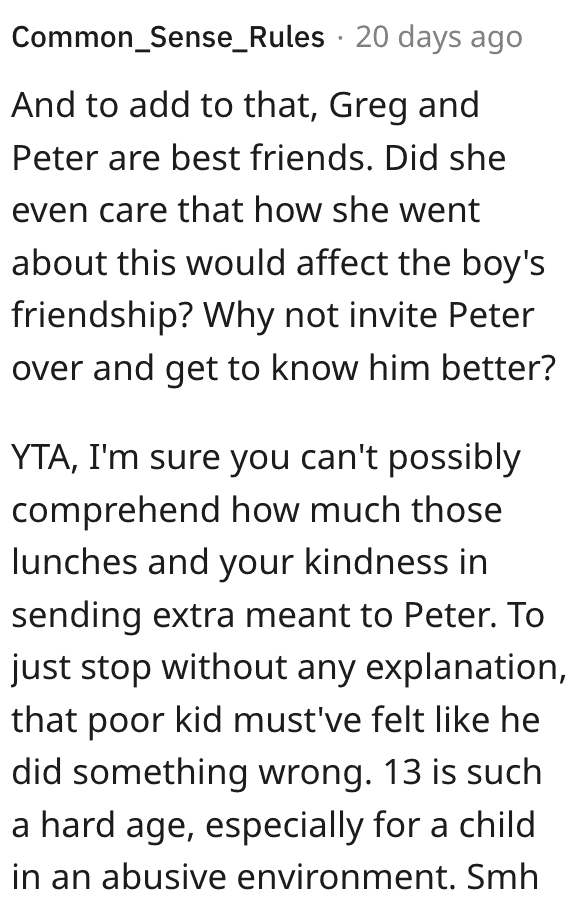 I do not like this story at all, and feel like the adults in this kid’s life are all failing him.

How would you have handled this if you were OP? Let’s hash it out in the comments!