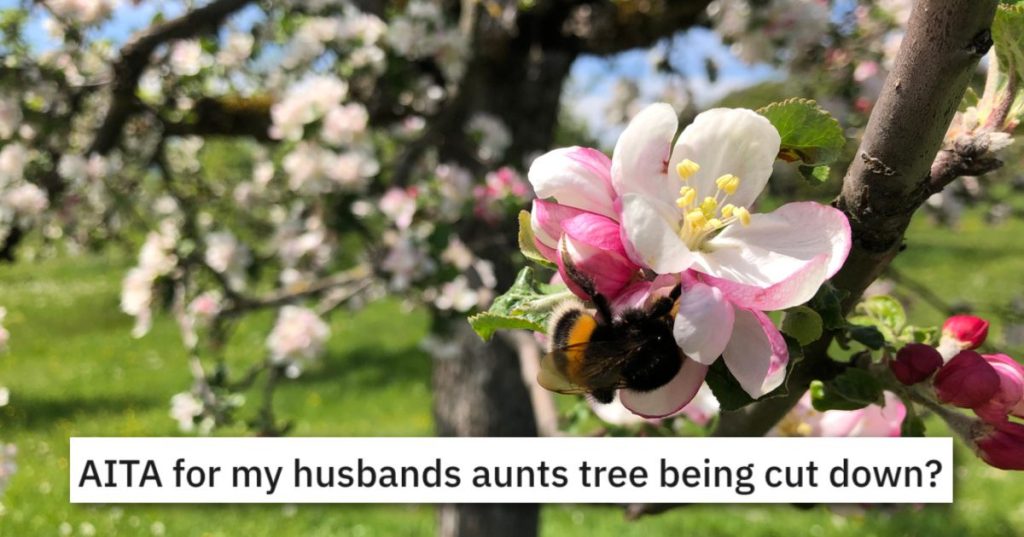 Should This Woman Have Stopped Her Father From Cutting Down A Beloved Tree?

Some people don’t get tree hugging, but for others, trees are as much family as are pets. They can hold a lot of sentimental value.

OP in this case is married to a man who is renting his aunt’s property. She moved in there too after the wedding, because the cheap rent allows the two of them to save money.

My husband rented his aunts home before we got married. He signed a month to month lease when he moved in. I moved in with him after our marriage because the rent was super cheap.

Recently her parents asked to come and stay, but since they would arrive in their RV, they needed to find a way to park in the back yard.

OP’s husband asked the aunt whether or not they could change the fence to widen the opening and add a gate.

She said no, the husband told OP know, and that should have been the end of it.

My parents recently came to me asking if they could park their RV at our home. I didn’t see a problem with this. Our yards are really big and there is space.

Because of city ordinance the RV has to be parked in the back yard. There was no RV gate in the fence.

My husband went to his aunt and asked if we could install a rv gate?

His aunt said no. My husband relayed the message to me and my parents seemed upset when I told them.

Instead, her parents showed up with a construction crew and by the time she and her husband saw the progress, the fence had already been altered.

Her husband said to put a stop to it but OP shrugged it off, saying it would cost more to put it back than just continue.

2 days ago. I came home from work and saw that my dad had a construction crew at our home and had removed part of the fence for the gate. There was a apple tree in the way. They couldn’t fit the RV in the yard.

My husband angry told my dad not to continue and that they needed to repair the fence. At this point I felt like it was pointless. The fence guys already built the columns for the gate.

It would cost a lot more money to rebuild the fence. I told my dad to finish the job but make sure it was left super clean. That it looked nice.

I planned on talking to the aunt later and explain what happened.

In the process, an apple tree was cut down, which turned out to be the biggest issue – it had been planted by the aunt’s late husband and she was attached to it.

What I didn’t know was my dad told the guys to remove the tree. My husbands aunt came by and saw the tree cut down and started to cry. She has refused to talk to my dad or me.

Now the aunt has served them with eviction papers and everyone in her husband’s family is angry, but OP isn’t sure any of this is actually her fault.

When my husband came home he found a 30 day notice on our door. Terminating our lease. He tried to call his aunt and she didn’t answer the phone. He then called my MIL and she went to talk to our aunt.

Later I got several messages calling me an A for cutting down the aunts late husbands tree. I had no idea he planted the tree.

Now my husband and his whole family are really angry at me. I never told them to remove the tree. I feel like I am being thrown under the bus here. Am I the A here?

But don’t worry – Reddit is going to let her know.

The top comment says that since OP was told no several times and ignored it, there’s really no other way to judge her except as the a$$hole. 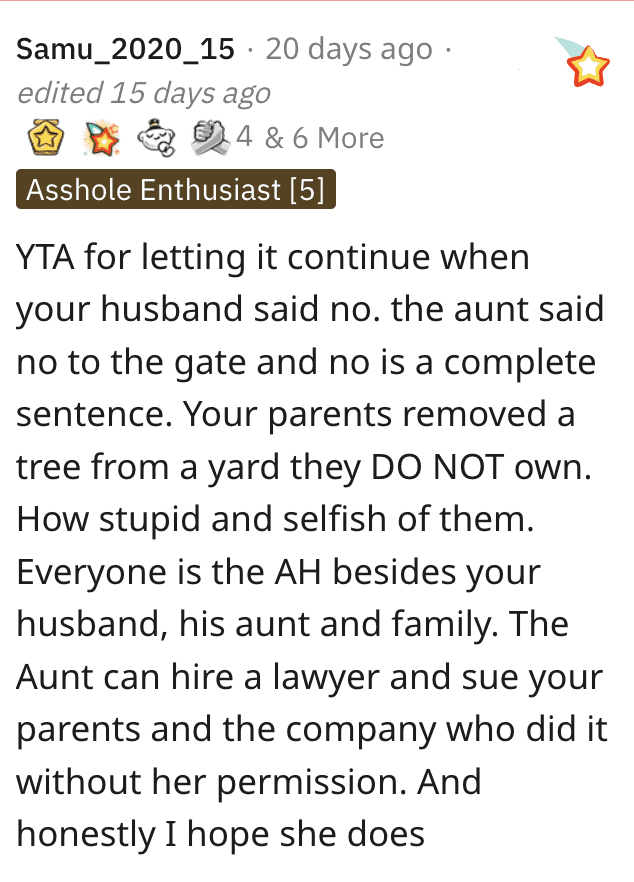 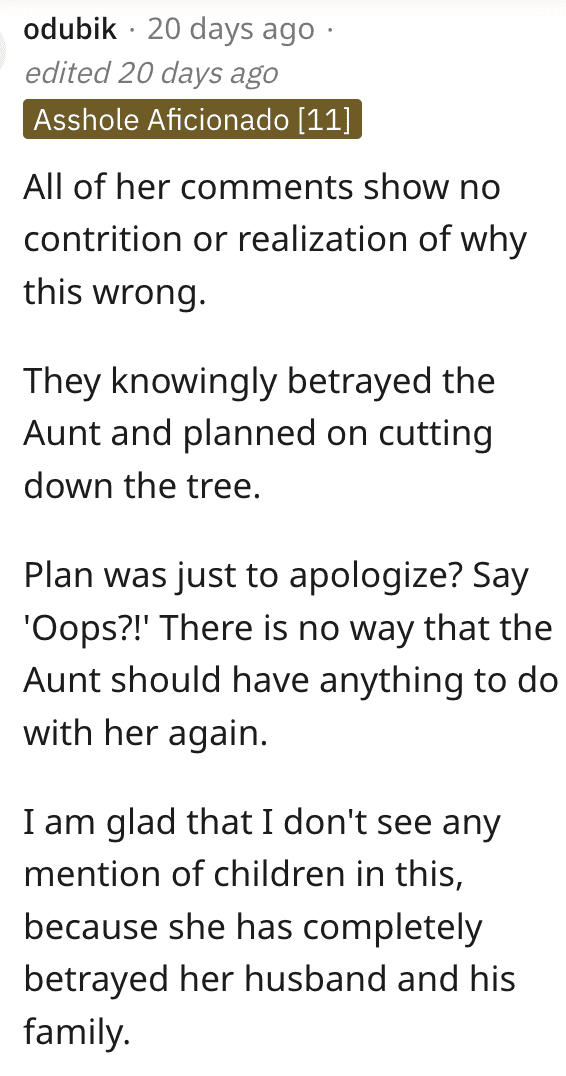 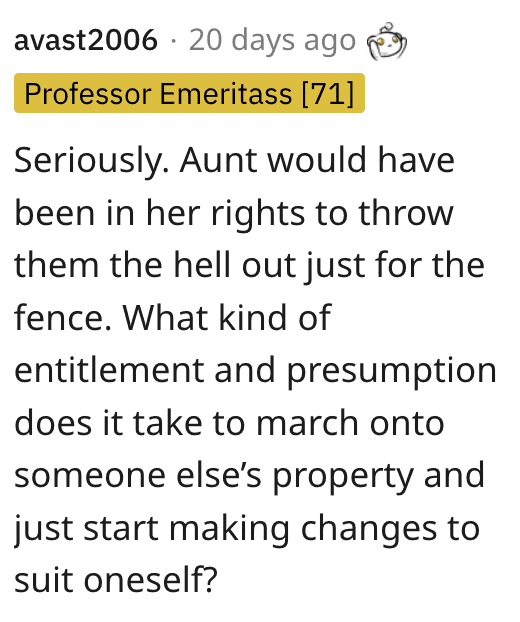 Others thought the (ahem) apple didn’t fall far from the tree. 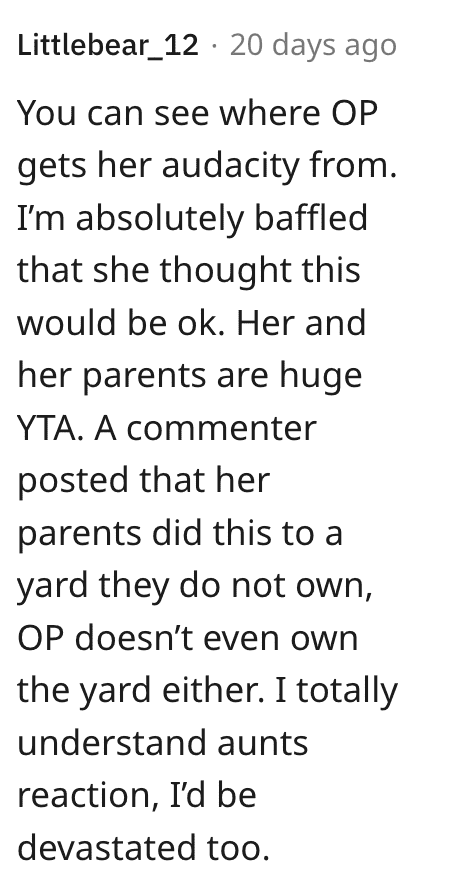 And this person (along with others) are wondering exactly how OP planned on explaining what had happened in the first place. 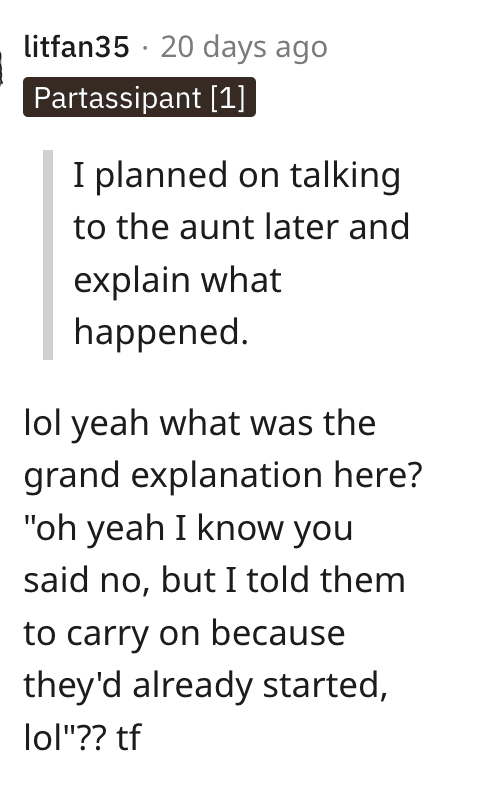 I can’t believe this person did not realize how wrong she and her family were before coming on the forum.

Would you have evicted them? Would you go further and take them to court? Let us know in the comments!