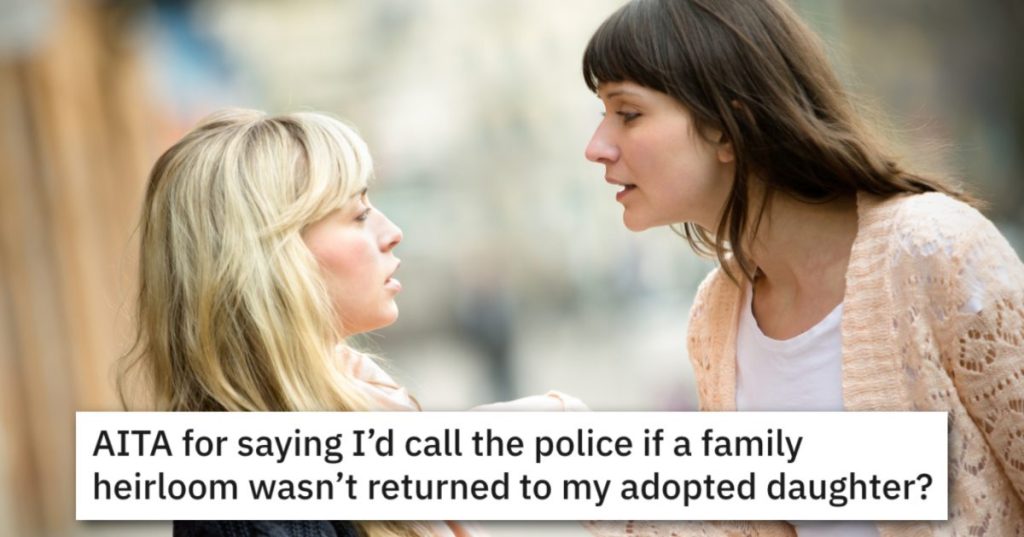 How Would You React If A Family Member Told Your Adopted Daughter She Couldn’t Have A Family Heirloom?

I would like to believe that anyone who adopts loves that child as much as they would love a child they gave birth to themselves – they’re family, legally and in every other way imaginable, and to treat them any differently would negate any good done by the adoption in the first place.

I worked at the bakery he’d stop at every Saturday before their walk, and eventually we started going out. We got married 6yrs ago, and I legally adopted Lily soon after that.

Recently her daughter turned 11 and was gifted a family heirloom that she totally loves and wears all the time.

In my family, it’s a tradition that the oldest daughter gets gifted an old sapphire ring on her 11th birthday. The ring belonged to my grandmother, who gave it to my aunt, who gave it to me because all of my cousins are male.

Lily’s 11th birthday was a few months ago, and I gave the ring to her because she’s my oldest daughter. She loves that ring more than anything.

She put it on a chain to wear around her neck so that she could keep better track of it, and in the months that she’s had it, I’ve never seen her take it off.

OP says that her younger sister and her daughter have a great relationship and spend lots of time together on a regular basis. But when her daughter came home from a recent outing with her aunt upset, OP felt the need to investigate.

My sister Mia (24f) is one of Lily’s favorite people. Lily really loves her aunt, and sometimes Mia will just text to let me and X know that she’s picking Lily up from school to go eat or go to the bookstore or something like that.

The other day, I got one of those texts from Mia, so I just told her to be safe, have fun, and make sure my daughter came home at a decent time because it was a school night.

Lily got home about an hour after we had dinner, and she barely said hello to her dad or me before she went up to her room.

I thought that maybe she was just tired, so he and I didn’t immediately ask her what was going on, but later that night I went to go check on her because I wanted to be sure.

What she found was that her sister had taken the heirloom from her daughter because it’s for “blood” relatives only.

When I walked into her room I saw that she had been crying. I asked her what was wrong, and it took a minute, but she eventually told me that Mia took the ring from her because it’s a family heirloom that’s supposed to go to the “actual” oldest daughter and because I adopted her, that means she isn’t really family.

The only reason I didn’t go to Mia’s apartment that night to get it back was because I spent the rest of the evening reassuring Lily that she is my family, and she is 100% my “actual” oldest daughter no matter what our DNA is or what anyone else says.

OP called and confronted her sister, who doubled down and said that OP could only have it back if she had a “real” daughter before auntie had one.

I left Mia a voicemail the next morning telling her to return the ring before I drive over there and get it myself. She texted saying she would only give it to me if I had a daughter before she did, but until then she’d keep it safe to make sure I didn’t give it back to “the wrong person”. So then I told her that if she didn’t return the ring by 2pm that day, I would be calling the police and reporting it stolen.

OP threatened to call the police and report the ring stolen if the sister did not return it. Her family thinks she’s gone too far with the threat.

She started texting like crazy, saying I was being ridiculous and doing too much. Our mom is in on it now too and she thinks saying I’d contact the police was taking it too far, and that Mia was only trying to keep to the family tradition.

The top comment says the sister is lucky that threat was the only one made. 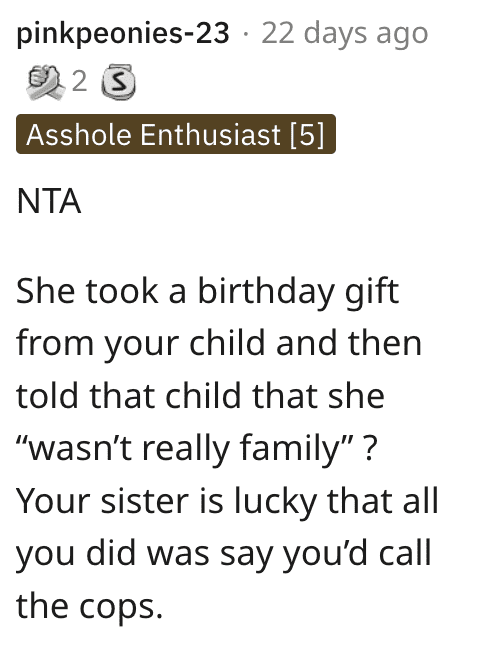 Everyone thinks the relationship between the daughter and the aunt should be put on hold at the very least. 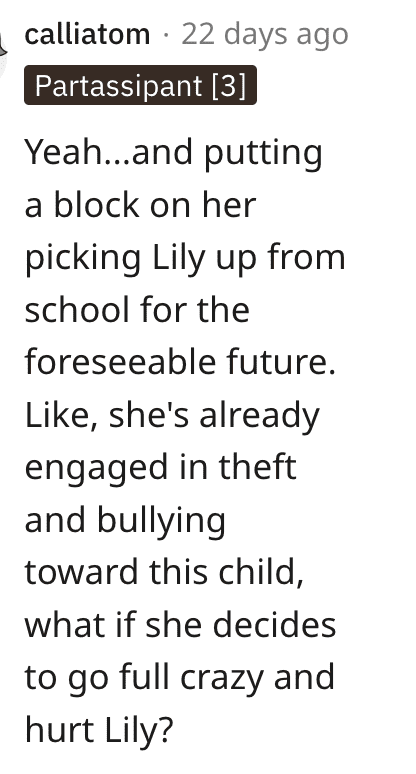 There are a lot of comments expressing concern over what this is likely all doing to the daughter’s confidence and security. 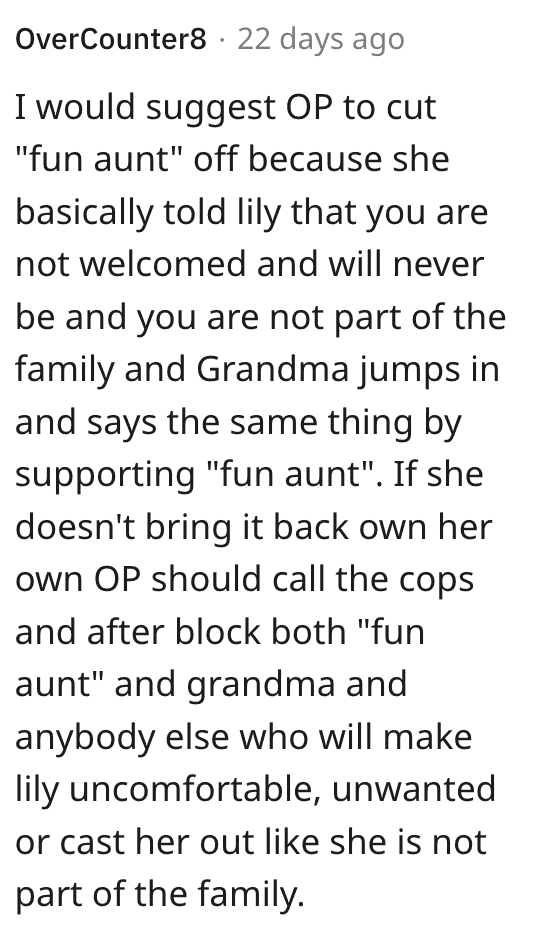 She’s going to learn early that family are the people who show up for you, not those connected by DNA. 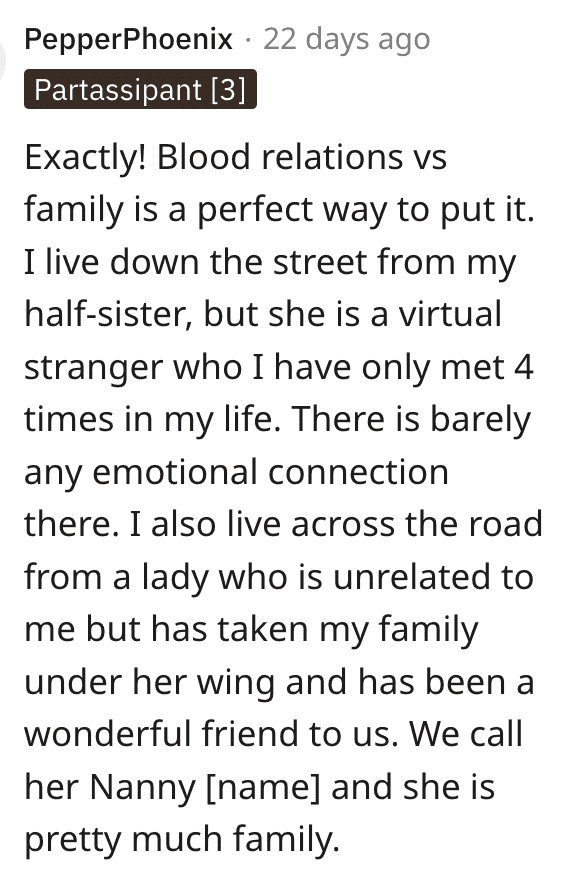 Pretty much everyone thinks the cops should be involved. No reason to wait. 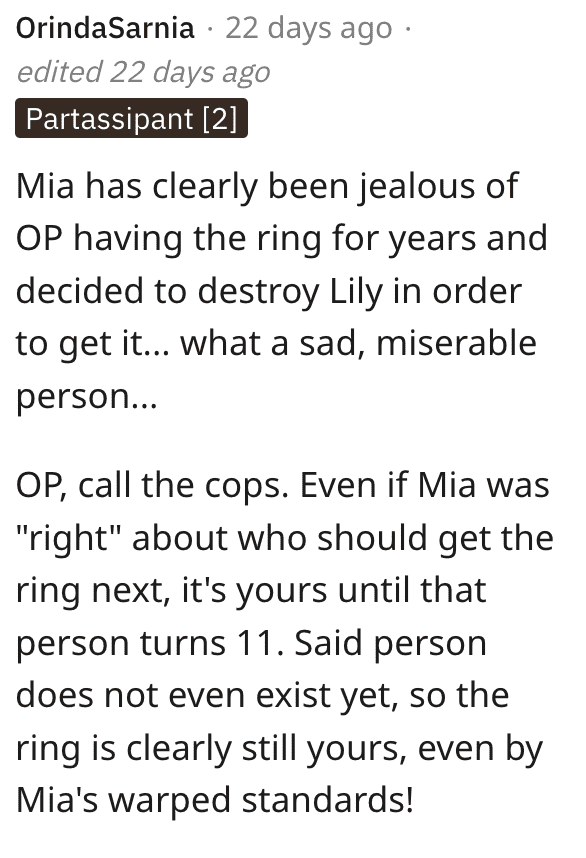 This whole story is just so gross and I feel awful for both OP and her daughter, finding out how family really feels in this way.

How would you have handled this as the mother? We want to hear about it in the comments!