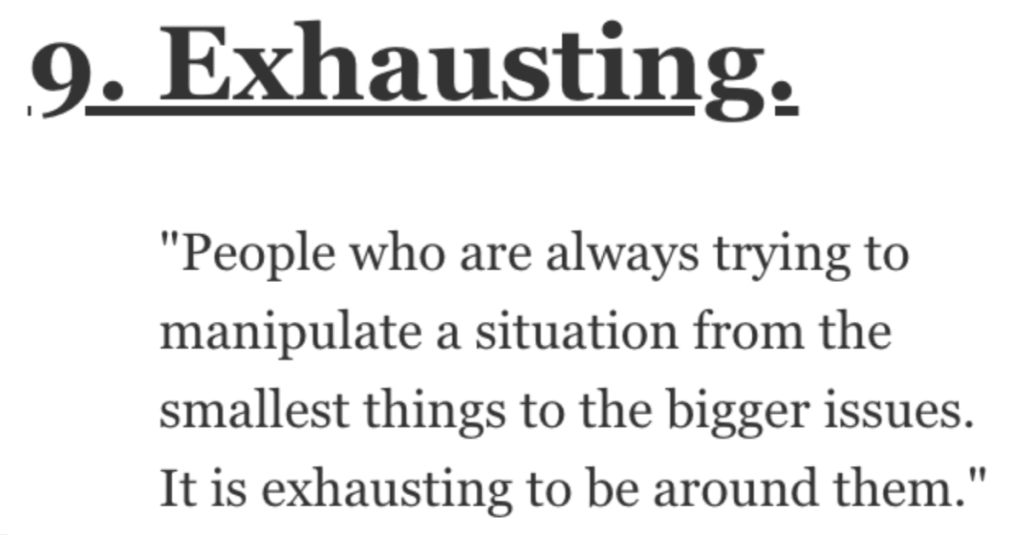 What’s a Giveaway That Someone Is a Bad Person? Here’s What People Said.

Have you ever met someone before and just knew right off the bat that something was not okay with them?

Maybe it was a look in their eye or the way they talked to someone else, etc.?

Whatever the case, when you know, you know…

Check out what AskReddit users think are giveaways that someone is a bad person.

“When telling you about issues in their life and everything is everyone else’s fault/ no accountability.”

“People who are always trying to manipulate a situation from the smallest things to the bigger issues.

It is exhausting to be around them.”

“When they cannot bring themselves to celebrate someone else’s success.

I had a friend like this. She was nice and seemed to like me. Took me quite some time to figure out the odd thing that was missing in our relationship.

She couldn’t be happy for me. Not even a little ‘Yeah good for you!’ or something like that. Just radio silence. We split ways”

“A lot of times they’ll straight up tell you. Anybody who gleefully tells you “I’m such an a**hole” or “I’m such a b**ch” is usually not joking, even if they say it while laughing.”

“There is this one saying…

“You can tell a person’s character by how they treat those who can’t do anything for them.””

“When they are ALWAYS the victim.

I put my guard up because I’ve known too many who rewrite their reality and deny their accountability.”

“Bragging about all the good they do.

People concerned with appearing as saints are anything but.”

“So this should be obvious but it’s not.

As a guy, don’t trust another guy if he cheats on his spouse.

If he’ll betray the closest person to him, he doesn’t care about his friends either, trust me.”

“How they talk about their significant other/spouse/partner/whatever.

If you talk s**t about the person you supposedly love, you are a giant mountain of garbage.”

“They violate other people’s boundaries and refuse to respect them, even when repeatedly asked to.

They even laugh at the idea, like other people’s boundaries are absurd. Yet of course, they have their own they expect to be respected.”

“They constantly state that they’re a good person and constantly brag about it.

I get maybe talking about something kind you did for someone but if you’re constantly trying to prove to everyone that you’re a good person…. you’re probably not.”

“When people say “it’s just a joke” after they say something obviously rude/hurtful to someone.

Unfortunately my one married SAHM friend does this to many of her friends and family members, myself included. Her and her brother stopped speaking because her SIL finally had the lady balls to tell her she’s never liked her and she was sick and tired of all of her rude “it’s just a joke” c**p.

Once when my husband and I were at my so-called friends house for a get-together she yelled out and pointed, in front of everyone, saying I was her geriatric friend (I’m 4 years older than her). Everyone just looked at her and gave her a wtf look and some of her friends started giving her s**t for it so she tried to back-peddle saying it was just a joke. I gave her a look of disgust and said “wow thanks…”

My husband and her husband weren’t in the room when it happened and my husband said if he was there he would’ve told her to F off. Another time a bunch of our friends were together for a concert and she yelled out abruptly to me, in front of everyone, “you’re old!” I was talking to one of my husbands coworkers at the time and we both just gave each other a “wtf is her problem” look and ignored her.

She wonders why we rarely, if ever, hang out with her. Her husband is awesome, always fun to be around, and is super nice. My husband says she’s only like that around me because my husband and I don’t have kids, I’m skinnier, and I look younger than her so she feels inadequate/threatened. I don’t care how she feels, it’s not an excuse to be allowed to treat someone with such disrespect.”

Do you have anything to add to this?

Sound off in the comments and let us know what you think.