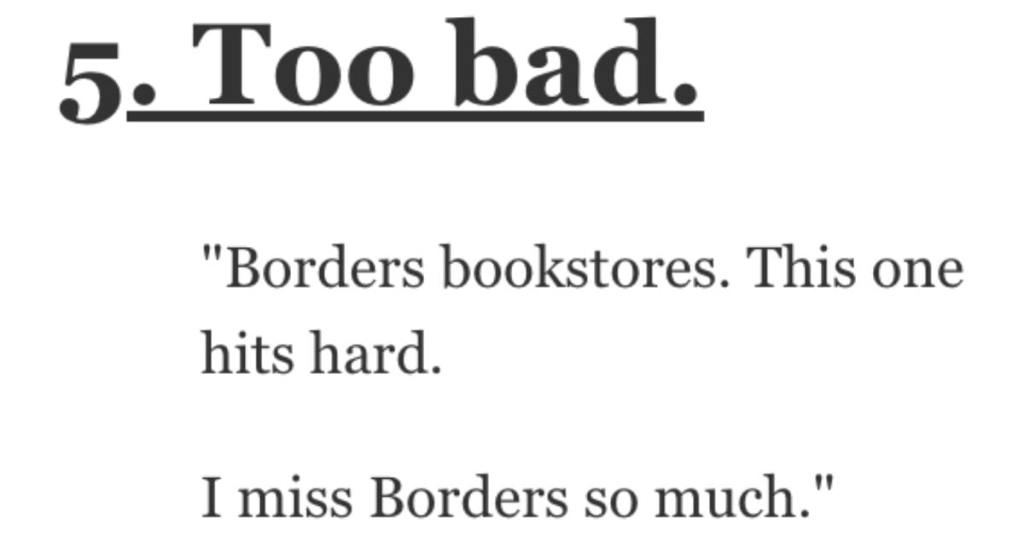 What’s Something From 10 Years Ago That Doesn’t Exist Now? Here’s What’s People Said.

Things sure do move fast, huh?

One minute you’re playing Atari and the next minute the Atari’s out the window and you have a Nintendo. And then a Sega Genesis.

And on and on it goes. My point is that things are always changing and some things just fall by the wayside.

AskReddit users talked about things that existed 10 years ago that aren’t around anymore.

The internet used to feel so much bigger.”

Well, many of them got saved on Blue Maxima, but there were still undoubtedly millions more that didn’t get saved.”

Most of the artists I liked left when p*rn got banned.

Plus tumblr had the best p*rn and I never had to worry about dowloading a virus from saving a pic.”

4. They were good places.

“This makes me feel so old but Blockbuster, Radio Shack, and Circuit City.”

This one hits hard.

I miss Borders so much.”

They’ve been gone for a while in Canada now.”

They officially shut it down in 2017.

I have so many great memories from high school with AIM.”

Also, Facebook games. Not those stupid games you play on Messenger.

I’m talking about Cityville, Mafia Wars 2, CafeLife, Farmville, It Girl, Gardens of Time and all those other games.”

Now its just whoever can pay the most to be seen first or some stupid cr*p to try and get you to think a certain way.

I miss the good old days.”

Miss the days of thriving conversations with people on subjects I liked, in threads that spanned months/years.”

You never just see a trilogy of films and that’s the end.

It all has to be a never ending series and a cinematic universe.”

We used to get three delivered to us every year. Two thick Yellow Pages books (A-K and L-Z or whatever it was) and then a White Pages (business numbers) book.

We don’t get it anymore because you can just Google businesses now and people are usually a facebook/instagram/online messaging app message away.”

“Cereal companies including computer games in the cereal boxes.

For the 5 of you that remember that, hahah.

In the comments, tell us some more things that were around 10 years ago but aren’t around anymore.