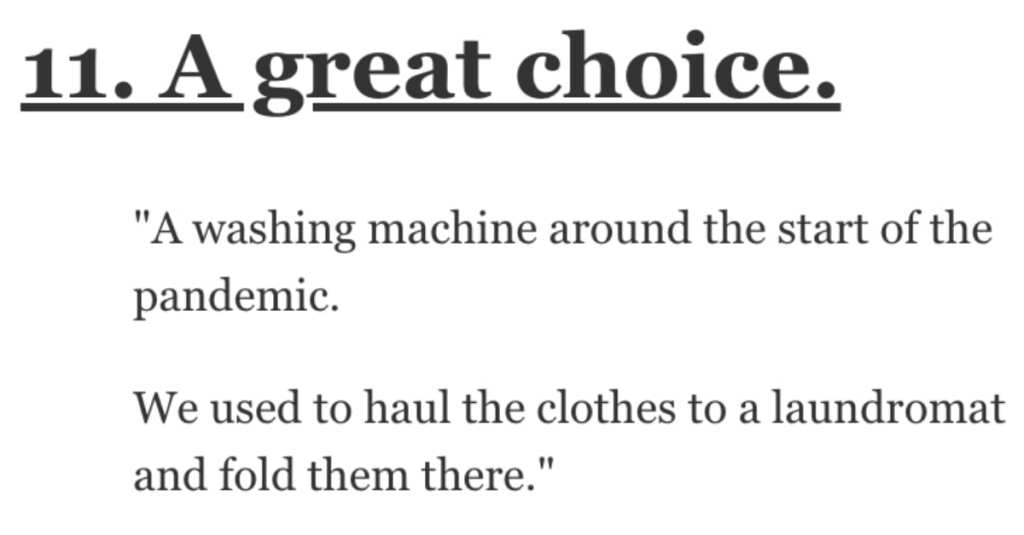 What’s the Best Purchase You Made in the Past Year? Here’s How People Responded.

We’ve all drastically changed our lives in the last year.

Because we’re spending almost all our time in our houses and apartments and not venturing outside too much, we’ve all bought things to adapt to our new reality.

And some of those things have been game-changers for people.

AskReddit folks talked about the best purchase they’ve made in the past year.

But the best part is they are really good for my family’s mental health, just hanging out with them, which is especially needed this year.”

After having 3 spinal surgeries a few years ago, hoovering has been the worst.

This bad boy has helped me more than you’ll ever know.”

“I’m living in SE Asia where it is scorching hot.

I have no air conditioner in my room, so I bought an air cooler just before the lockdown started. Best purchase.

“An inflatable stand up paddle board.

Being able to drive to a lake and paddle around on the water for a few hours really helped me get through this year.”

It’s so incredible to see Jupiter moons and Saturn.

And see that there is much more in the sky than meets the eye.”

“A big fancy desk for my home office.

My wife and I were both WFH in a 500 square foot apartment which did not go well. We finally got a house with room to spread out and it’s made our lives much easier.

I recognize this is not an easy whim purchase, but instead was one that we’ve been saving for 8 years for.”

I am two months in, can see major improvements, and people don’t have to see or hear me talk funny with a retainer! Two more months to go.

Never thought I would win an award for having crooked teeth but now it seems worth it!”

“I bought a running 84′ Camaro for the sake of learning how to work on cars and having a project vehicle. I’ve been wanting to do this since I was a kid.

So far I’ve rebuilt drum brakes, changed u joints, changed all wheel bearings/seals, bought a new carburetors, upgraded to an electric radiator fan, restored all the gauges back to factory original, and a bunch of other stuff. I will say I’ve learned a substantial amount so far!

When I get some money saved up, I’m gonna tear into the engine and rebuild it.”

Seriously I have not had a second where I have regretted it. It truly is life changing.

“A washing machine around the start of the pandemic.

We used to haul the clothes to a laundromat and fold them there.”

“I bought a $2 travel mug that gets me free coffee from a gas station on every Tuesday.

I can’t wait for my 200th “free coffee” because after that I’ll have essentially paid less than 1 penny for each refill.

This is the goal in life.”

“A plane ticket to leave an awful ex.

I (34f) was with my ex (34m) for 6yrs. We were married 4. About a year and a half prior to me leaving state he stopped working without a job lined up. At the same time he stopped helping me cook and do household chores. He quit his meds & counseling to take medicinal Marijuana.

He’d sleep all day and play video games all night. I had to work 50+hrs/wk, cook, clean, crack his back, massage his shoulders/back, and get snacks/beverages for him. He was a complete man-child.

He cheated on me, was an alcoholic who only got sober while unemployed, and other awful stuff. Such as cheating on me with someone he knew since middle school. She got pregnant and he thought it was his. He wanted her to give birth and us raise it. I found out before I flew out she wanted him to leave me for her. We found out the child was from a drug addict and she had an ab*rtion. He still remains “friends” with her to this day.

For the year and a half I politely asked him, pleaded, begged and even argued with him about the lack of job/financial contribution and not doing household chores. That it was too much for me. The argument portion ended with him calling me a cunt.

When I was 16 I lived in the south and dated a guy (S) who had a group of friends. My family forced me to leave state and I found out I was pregnant. I gave the child up for open adoption. When I was 19, I dated a guy from the friend group (T) and it was long distance. We broke up over the distance and something petty. Last September T (34m) re-entered my life.

I’m not sure if it was new medications or T. But it was like I woke up from a nightmare and realized that the above sh*tty life did not have to persist. We were talking and the moment we recognized what was going on, we separated from our spouses.

On Nov 5th I jumped on a plane to be with T. It’s the happiest, most calm, and content I’ve ever been in my life.”

What do you think is the best purchase you’ve made in the past year?