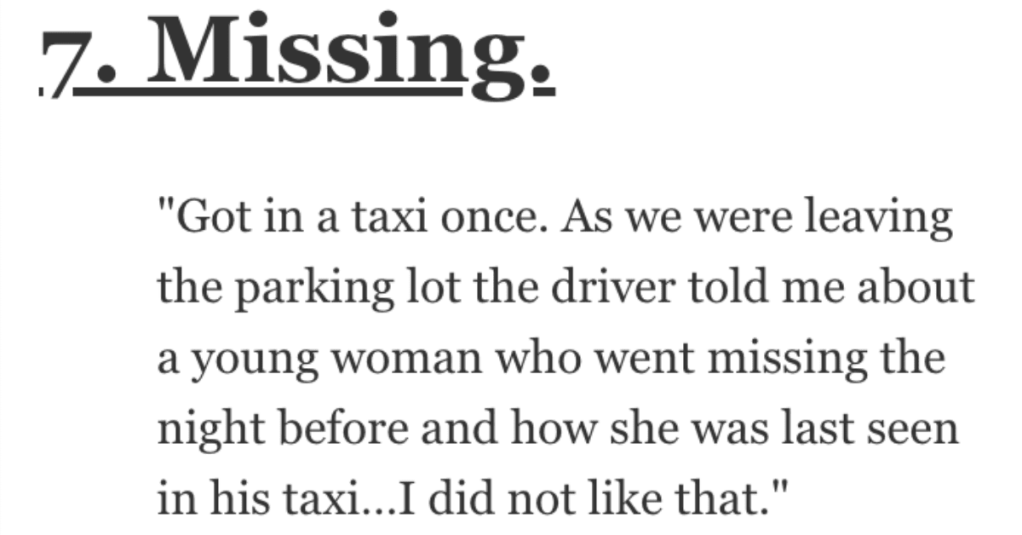 What’s the Creepiest Thing Someone Ever Told You? Here’s What People Said.

Okay, this is a weird one, so hang on tight…

I was in an Uber a few years ago and the driver ended up telling me that he just got out of prison for k**ling a man who had treated his sister badly.

Quite a conversation for someone you met 30 seconds ago, huh?

What’s the creepiest thing someone ever told you?

“I used to have this guy come into my work and we would talk about aquariums. He used to live in a city not too far from where we were at.

The last time that I spoke with him, he was telling me about how p**stitutes used to end up d**d and they were found by the river.

He seemed really excited about it as well. I didn’t say anything and I didn’t see him again.”

“I knew a guy in business who was in a golf group with OJ Simpson a couple months before the m**ders.

Said he couldn’t stop talking about how much he loved his wife and was looking forward to getting back together with her soon.

“I used to work evenings in an Alzheimer’s/dementia home, and had become good friends with one man.

He once told me, “I like when you talk to me, but I don’t like the tall man behind you.”

I know it was probably a hallucination, but that’s a NO.”

“That she had a guardian angel that helped her out.

Like when she disliked someone and he had a lethal accident at work because she ordered it.

The woman was severely psychotic and this scared the c**p out of 12 year old me.”

“I worked as a psychiatric tech for outpatient community based clients and had a patient have a psychotic break and told me that he wanted to “cut off my arms legs and head and watch me rot in hell” and “there are bugs crawling on you” and while brushing my upper thigh.

He was a foot taller than me and twice my weight. The scariest part was the ER staff telling me he was released because he wasn’t a threat to himself or others THAT NIGHT.”

“I was in a hospital for several days and I had made friends with an old woman in the room down the hall from me.

She told me she grew up in Jamaica. (We were in the US) She also told me she was a witch. I was 21 at the time, and didn’t know much about witchcraft other than movies, I think I said something like “Oh cool, really?”

She said “watch I’ll show you.” Now this is where it gets creepy. We were on one of the upper floors of the hospital sitting by a window that overlooked an intersection below. There was a man walking down the sidewalk along the road.

She said, “See that man?” I said, “Yeah?” She held her hand out in front of her and said “Oops, you forgot something.” The man, who was walking a pretty fast stride stopped d**d in his tracks and started patting his pockets.

Then after a few moments she said “Alright now off you go.” And flicked her hand and the man stopped searching his pockets and just started off walking again as fast as he had before.

It left me speechless and really freaked me out.”

“Got in a taxi once.

“When I was in high school one of my friends decided to get into occult things, and started using the Ouija board frequently.

On day when she left school to walk home a large black bird started following her and dive bombing and squawking at her. When she got safely into her home the thing sat in the tree outside her room, still squawking.

She destroyed her Ouija board, or threw it away, and the bird never came back.”

“When I was in 5th grade, my older brother sent me to the convenience store to buy milk.

A random adult man with shoulder length, stringy straight hair started walking beside me and asking me questions about myself…what grade I was in, what I was up to, etc.

We passed by a yard with a dog. The dog ran up to the fence, growling and barking we shied away and, once we were past the yard, the man looked me in the eye and said:

“I could have k**led that dog. I know how to rip its heart out with my bare hands.””

“I used to do in home tech services. I worked alone, I’m a female.

One time I was doing a job for an old guy and his old guy friend was there too. Old home owner guy was in another room and left me alone with his friend.

His friend asks me “does anyone know you’re here” I respond with “yes my GPS is tracked on my vehicle and on my phone”.

He then says “oh because if no one knows you’re here I could have my way with you” my face went pale. Who says things like that?”

“Guy had circular burn scars all over, and he told me he likes burning himself because he likes pain.

He was quick to assure me he wasn’t depressed.

He just likes pain. He then asked me out.”

“When I was in high school I had to do an oral presentation that was supposed to be at least 10 minutes.

Well, it ended up being about 2 minutes and my 50-something year old male teacher said (in front of the class) “it was supposed to be at least 10 minutes but I’ll make an exception for you since you’re easy on the eyes”.

Everyone in the class was speechless. I got an A. Very creepy, I was like 16.”

What’s the creepiest thing someone ever told you?