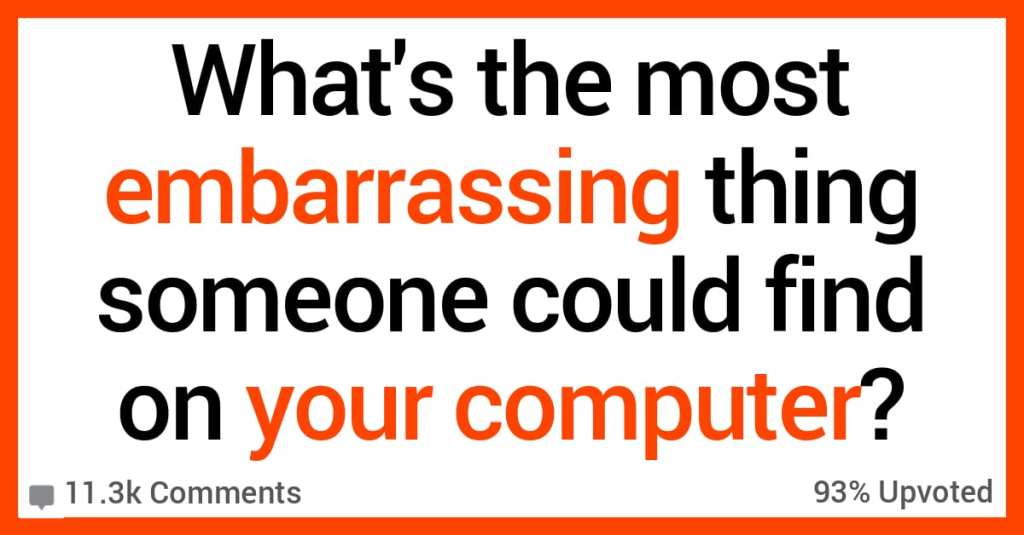 What’s the Most Embarrassing Item Someone Could Find on Your Computer? Here’s How People Responded.

No, we’re not talking about certain materials that have to do with the adult entertainment industry in these responses.

Get your head out of the gutter, will you?!?!

But we ARE talking about things that people openly admitted would probably be incredibly embarrassing if they were to be discovered.

AskReddit users opened up with these responses about embarrassing things on their computers.

“I wrote a Winnie the Pooh fan fiction called “The Hundred Acre Hood”.

It mostly involved Pooh’s raging diabetes and his incessant for “medical grade” honey.

The bees committed many acts of police buzztality.”

“I keep a folder on my computer that basically functions like a fiction writing version of my diary.

I find it comforting to work through possible imaginary scenarios with people that I think about a lot, especially if I’m stressed about something… which means sometimes I’m basically writing fan fiction about my own life.

I’ve also got some files that are just retellings of things that have actually happened in narrative form, which I keep for posterity’s sake.”

I’ve replaced my music streaming with Spotify but still have all the awful stuff I listened to a decade ago on iTunes.”

“First drafts of my writing and “song sketches”. Some of us have a relationship with music where…it sort of happens automatically. It’s like a flash of lightning, a song is just there in your head, completed and ready to go.

The problem is, this is a little like waking up from a dream in that the clarity and detail of the song fades over the minutes following the flash. If you don’t get it out NOW, it ends up lost forever.

So there are many recordings of me humming and whistling various parts of songs into the mic like a godd*mn psychopath, just trying to get it out now so I can arrange it properly when I have the time to deal with it professionally.”

“My search history from roughly two weeks ago when I searched “is it normal to have a dent in your forehead?”

“List of your former classmates and their measurements, gathered and estimated from their social media accounts.”

“If my old family laptop from like 2011 worked, my 8 year old self’s search history would be concerning.”

“Been losing weight somewhat privately for about 6/7 months, down around 65 lbs.

I say privately in that I have not announced or shared really with anyone except family and extremely close friends that Ive lost weight (thanks quarantine).

Every month, I document weight/measurements, as well as take pretty unflattering nude progress pics. As amazing as it is for me to see…Id pretty much die if I anyone saw them.”

“A text file titled “Open in Case of Memory Loss”.

My greatest fear is losing my memory. It’s an overall description of my current life situation, relationships with friends and family, and my personality and behavior.

Just enough so that I could get by without any outside help/harm should my fear become reality.

It would also be super embarrassing for someone else to read.”

“I have a folder that’s full of pictures of stickers and a word doc that I use as a daily “sticker sheet.”

When I accomplish small tasks throughout the day, I paste an image of a sticker on my sticker sheet to congratulate myself.”

“Letters to my ex.

We were stuck in an abuse cycle and I would leave but then keep going back. At a certain point I knew I really needed to just be done. If ever he called me (I didn’t answer but would painfully listen to him leaving me a message) or if I wanted desperately to call him, I would write “to him” with whatever I wanted to say.

I’d write it out, save it, and try to go to bed. I never sent it. A lot of it is very cringey. And so it should be. I was massively in love with a guy that sometimes loved me. It was confusing. I am loyal and I was young. But those letters helped me kick my Jerkasaurus addiction.

Haven’t deleted them, not sure why not, though I haven’t read them in at least a decade. I suppose it is interesting to watch my feelings towards them change as I get older.”

“We feed the wild birds in our garden and I have a list of birds species I’ve seen there.

I’m 36 and love football, beer and sheds like most blokes but I don’t come across as someone who likes bird watching!”

“A Ritalin-fueled novel I started to write about my fantasy life as a stripper.”

“A letter describing my ex-wife’s behavior and what I let her get away with in our marriage.

Never meant to be sent, I just wrote it to get it out of my mind.”

What would we find on your computer that would be totally embarrassing?