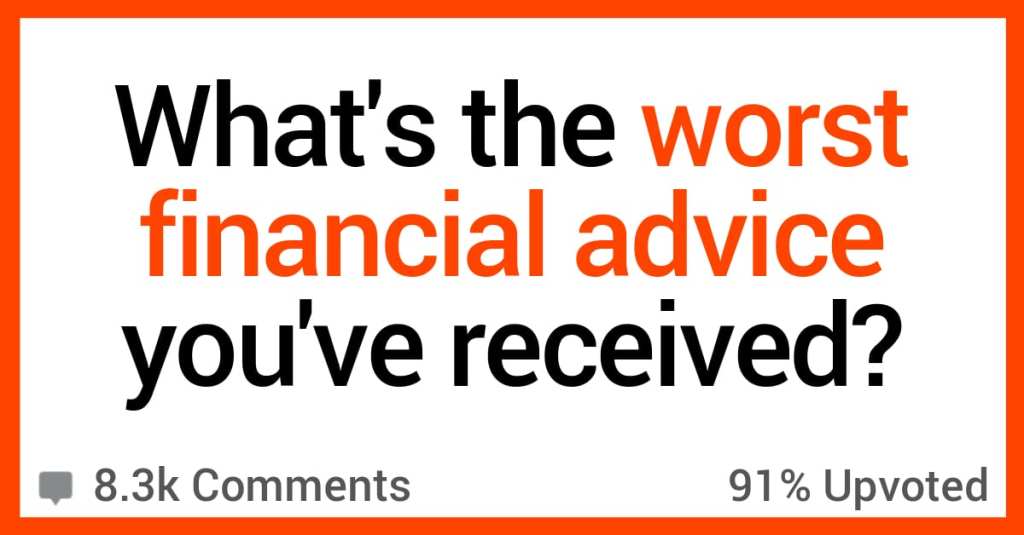 What’s the Worst Financial Advice Someone Gave You? Here’s How People Responded.

Hearing stories about people making really bad decisions with money and then suffering because of it always really bums me out.

That’s why the stories we’re about to read are ones that you should remember because they’re things you DO NOT want to do.

Are we clear on that? Good!

AskReddit users talked about the worst financial advice they ever received.

I had a coworker that got pretty much everything there.

“So when I was 24, I was financially struggling. I had a job that worked me a LOT of hours, but only paid me $10 an hour.

My parents talked me into buying a BRAND NEW 2004 4-Door Honda Civic, the pre-interest price tag on it was about $25,000. A few weeks after getting it, my hours got regulated and it took one entire paycheck to make the monthly note on it – I could NOT afford the insurance on it.

I very quickly realized my parents were bad at money.”

“My FIL when I mention our retirement plan “I never contribute to my retirement account. Money now is always better than money later”.

I needed to have a conversation with my husband how we would NOT be supporting his mom and dad and their insane spending when they have no retirement plan and make huge financial mistakes on a weekly basis (good news is they both make good money).”

““Spend it quickly or it’ll get stolen.”

Coming from someone with a history of losing and blowing their money.”

“A relative tried to recruit me into Amway. He wound up stuck with a garage full of their products.

My mom joined and ended up having to buy their junk continuously. They also promised to pay her, she never saw a dime from them.”

“One of my uncles once told me that I never really had to pay my phone bill.

He suggested that I simply jump to another carrier and let the first company cut you off.

His life has turned out exactly as you’d imagine.”

“”Once you cut up the credit card, you don’t have to pay it.”

My cousin is not doing so hot.

I’m pretty sure there are warrants out for his arrest in several states.”

“Keep renting, no one will ever pay $35,000 for a 2 bedroom house and garage with a sweeping view of the East Bay.”

I went back to vist the old neighborhood a few years ago, those $35,000 stucco homes up many flights of steps perched on the top of Potrero Hill were now all gentrified, remodeled, gated, and asking $1M+ and that was 5 years ago.”

“Don’t take a raise if it puts you into the next tax bracket.

And pay the minimum on your credit card to establish good credit.”

I did not take that advice.”

“About 5 years ago, I had a friend who was trying to convince me to study through a private college because they “gave her a free iPad”.

She never finished the course, but kept the iPad (you only got to keep it once you pay your fees and graduate. Mind you, the price of the course included the iPad so it wasn’t free).

So last year, four years later, I get a call from the college asking for her contact info. She put me down as a reference and they were chasing her down because she still owed her fees and wasn’t entitled to keep the iPad.”

“My cousin bought a camper, went camping once, and then decided camping wasn’t for them.

Rather than selling it they decided to just stop making the payments and “let the bank come and get it.”

Which, eventually, they did.”

“Just ignore the collection call and eventually they will leave you alone….

I had a parking ticket I didn’t know about that ended up on my credit and the guy I mentioned it to gave me that bit of wisdom.”

“Not me, but my dad’s friend makes a decent more money than him.

He owns boats, takes luxurious trips, buys top of the line clothes and goes to the best restaurant where he orders the most expensive wine he can get. He always tells my dad to live more in the moment, telling him to invest in himself and enjoy his life.

My dad is happily planning his retirement with my mom.

This guy doesn’t have a dime saved. He will work to the day he dies.”

What’s the worst financial advice someone ever gave YOU?