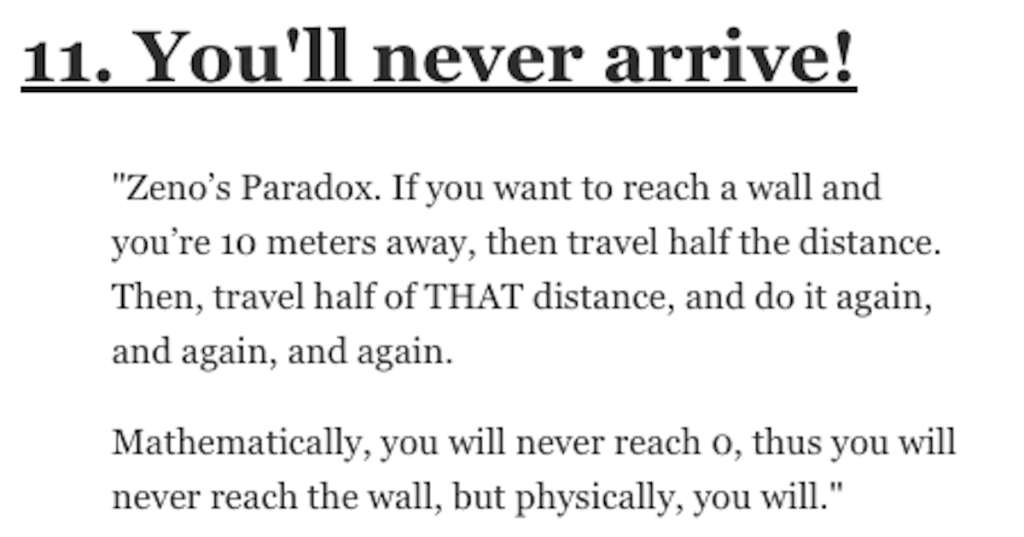 What’s Your Favorite Paradox? Here’s What People Had to Say!

Paradox: “a situation, person, or thing that combines contradictory features or qualities.”

So we’re about to see all kinds of paradoxes!

Let’s have some fun with folks on AskReddit!

“No one goes there because it’s too crowded.”

“The future ain’t what it used to be.”

“I hate myself, but I think I’m better than everyone.”

“Trust me when I say this, trust no one…”

“The Paradox of Tolerance.

“In order to maintain a tolerant society, the society must be intolerant of intolerance.””

If nothing is impossible it’s possible for something to be impossible.”

“If you enjoy being taken out of your comfort zone, you can’t be.”

“Berry Paradox: here’s a version from Wikipedia “The smallest positive integer not definable in under sixty letters” (which contains 57 letters) so haven’t you just defined that integer?

I find it interesting because I wrote a paper on parallels between it, compression, incompressibility, and Kolmogorov complexity. Language and symbolic representations are weird.”

“The heap of sand one.

If you have what you agree to be a “heap” of sand, and remove one grain, then it’s still a heap, right?

So if a heap -1 is still a heap, you should logically be able to keep going until you have a “heap” of 1 grain of sand.”

Back in the early 20th century, when they were pushing to make cannabis illegal, the primary reason was to go after people of color. So they made a law stating that in order to legally possess cannabis (which they called marijuana for purely racist reasons), they had to have a valid license of ownership. In order to be able to apply for that license, they had to have cannabis in their possession.

So people of color, wanting to stay within the realm of the law, would go to the police station, with cannabis in their possession, acting in good faith to apply for a license to carry cannabis. And then they would subsequently be arrested for being in possession without a license.

I can’t say this is my favorite paradox, but it’s by far the most chilling example of how logic plays ZERO factor in institutionalized racism, and it never will.”

“The grandfather paradox – if you travel back in time and kill your grandfather then you wouldn’t have been born.

But if you weren’t born then you couldn’t kill your grandfather  which means you did get born, etc…”

“You shouldn’t go in the water till you know how to swim, but you cant learn to swim without going in the water.”

If you ask him to give you the movie UP, and he declines the offer, he will have let you down, but if he accepts, he has gave you up.”

Immigrants who are somehow lazy and leeching off social services while simultaneously stealing all all the jobs.”

“The Fermi Paradox is one of my all time favorites!

The Fermi paradox, named after Italian-American physicist Enrico Fermi, is the apparent contradiction between the lack of evidence for extraterrestrial civilizations and various high estimates for their probability (such as some optimistic estimates for the Drake equation).

The following are some of the facts that together serve to highlight the apparent contradiction:

There are billions of stars in the Milky Way similar to the Sun.

With high probability, some of these stars have Earth-like planets.

Many of these stars, and hence their planets, are much older than the sun. If the Earth is typical, some may have developed intelligent life long ago.

Some of these civilizations may have developed interstellar travel, a step humans are investigating now.

Even at the slow pace of currently envisioned interstellar travel, the Milky Way galaxy could be completely traversed in a few million years.

And since many of the stars similar to the Sun are billions of years older, the Earth should have already been visited by extraterrestrial civilizations, or at least their probes.

However, there is no convincing evidence that this has happened.”

Tell us your favorite paradox in the comments!